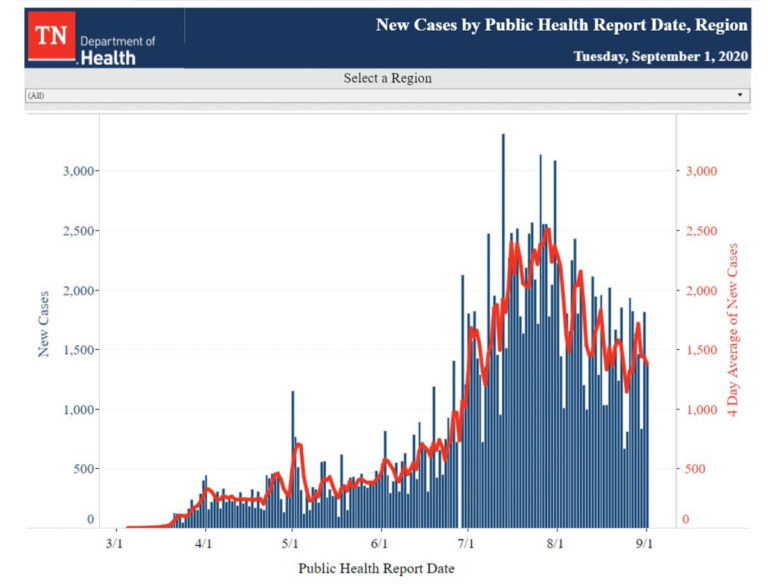 The state of Tennessee reported 1,396 new cases of COVID-19 yesterday, as well as 27 deaths. 156,329 Tennesseans have gotten the illness and 1,781 have died as a result. 118,885 people have recovered, including 2,021 yesterday, and 35,663 people remain ill. An additional 100 state residents were hospitalized and the state reported giving over 16,000 additional tests. The total tests given has now crossed 2.2 million.

The current four-day moving average of new cases in the state is 1,379 per day, roughly where it was two weeks ago, albeit with many ups and downs in between. Average daily deaths in the state have remained in the 20s for about the last three weeks and currently sit at 21. Total current hospitalizations are up for the third consecutive day, though they remain about the same as a week ago and significantly lower than the end of July. There are currently 912 hospitalized, 315 in ICU and 159 on ventilators.

The number of the number of tests reported each day continues to be erratic which, in turn causes the numbers to be the same. I noted yesterday that the positive result percentage had suddenly skyrocketed to 15.7% and a helpful reader pointed me to the likely culprit: a prison outbreak in Wayne County. I’ve seen varying reports of how many tests were given and how many were positive, but this article says about 3,000 were tested and about 1,100 were positive after inmates began to become ill. If all the data were reported in one day, clearly that would skew the positive result percentage.

That said, indications are our positive test percentage is rising. The day after reporting the 15.7% for the day, the state is reporting a 9.85% rate. Clearly that is much better, but it is still nearly twice what we should see if community spread was under control and testing was adequate. Johns Hopkins is also showing the increase for the state, as their seven-day moving average is now up to 7.6%.

Today, the Knox County Health Department reported 104 additional cases of COVID-19 among county residents and one additional death overnight. Total cases in the county since the beginning of the pandemic have now reached 6,746, and 59 have died. 4,611 people have recovered and 2,317 remain ill. There are currently 48 people in the hospital, up from 45 yesterday, and the pandemic total is now 269 Knox County residents who have been hospitalized at some point.

The benchmark ratings are reviewed each Wednesday, as the Health Department examines metrics related to increases in numbers of cases, testing, public health capacity, health care system capacity and deaths. Red, green or yellow lights are assigned to each metric, each Wednesday. For a metric to be red, there must be three consecutive days of statistically significant changes in the wrong direction. Last week all metrics were green, except for hospital capacity, which was yellow. All metrics retained the same ratings this week.

Looking at the graphs on the website, and the data from recent days, there do appear to be some tentative causes for concern. First, while it is difficult to judge, given the dramatically up-and-down pattern of new cases, there was a reversal over the last seven days in some of the progress we’d seen prior to that. The last seven days have produced 683 new cases (98 per day), even though the graphs on the site show a slight decline in testing. The prior seven day period produced 534 new cases (76 per day). That’s a 28.9% increase week-over-week.

An additional concern is shown in the number of hospitalizations. Remember that the hospitals in Knox County serve more than simply Knox County residents. To the best of my memory and record review, the 45 COVID-positive Knox County residents in hospitals yesterday tied a record. Today the number increased by 3 to 48, setting a new record. It will be very interesting tonight to see Dr. Shamiyeh’s report at the Board of Health meeting.

The University of Tennessee is reporting 243 active cases, including 5 staff and 238 students. The number reflects a 25% increase overnight and the additional cases are all found in the student population. An additional nine were moved to the recovered status, bringing that number to 230 and meaning that the increase in cases from yesterday was actually higher in total cases.

The number of students and faculty in isolation or quarantined also increased dramatically overnight, shifting from a total of 1,045 yesterday to 1,253, a 19.9% increase. Currently quarantined are 64 employees and 1,189 students. Of the students, 557 are on campus and 632 are off-campus.

The Knox County Schools are reporting 47 active cases, evenly divided between students (23) and staff (24). While their graph, shown above, continues to replicate the current day in the previous day, the actual number of active cases reported yesterday was 43. Two additional students and two additional teachers were added to the totals, but there were three additional recoveries, meaning there were seven new cases.

The active cases are problematic for the school system in-and-of themselves, but the larger problem is the number who must quarantine or self-isolate. That number now sits at 497, including 412 students and 85 staff. The number increased by 69 overnight. The concern there is that this 16.1% overnight increase follows a 30.5% increase from the day before. Either the rate slows or an inflection point will soon be reached at which point in-person education becomes extremely difficult.