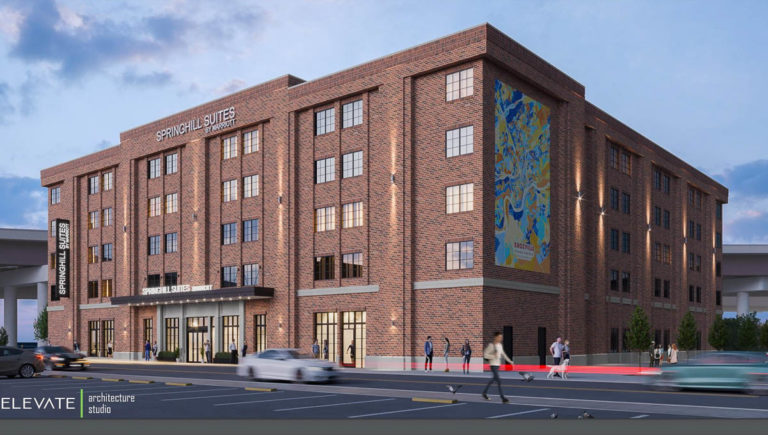 Local developer Nick Patel has made a direct public statement regarding stadium approval as it relates to surrounding development. The latest proposed hotel project for his Turkey Creek Hospitality Group is slated to sit on the current parking lot beside Barley’s if the proposed “baseball stadium and multi-use facility” is approved.

The 127 room SpringHill Suites, would be the latest in a string of hotels managed by the group, including a Hampton Inn and Suites adjacent to the Smokies Stadium in Kodak. The group also operates three hotels in Knoxville, two in Sevierville, and one in Pigeon Forge. An additional property is planned on Beale Street in Memphis.

From the press release, Patel said, “I’m excited about the growth of downtown Knoxville. The stadium is a much-needed element to help refresh and revitalize the Old City. It brings a great new energy, and I want to contribute to the momentum.”

The hotel would be five stories and the cost is estimated at $22 million. The press release promises it will “have have an upscale, historic feel
similar to other buildings in the Old City; it also will complement the design of the proposed stadium.”

The hotel would sit on the half-acre lot, which he has already purchased, next to Barley’s. He has also purchased the one acre lot across the street to use for parking. The press release did not clarify whether this would remain a surface lot or it would become a garage.

Patel, president and owner of Turkey Creek Hospitality Group, grew up in Strawberry Plains and is a UT Graduate with a degree in Business Administration. The company formed to bring the SpringHill Suites by Marriott to the Old City is Old City Ventures.

Saying that Knoxville is his home and that the stadium would be an important addition to the city, Patel also said it furthers the “family-friendly downtown environment . . . this place is close to my heart. Like my local mentors, David Dewhirst, Mark Heinz and Tim Hill, who laid a lot groundwork towards Knoxville’s growth, I am thrilled to be a part of our city’s continued success. You can feel the positive energy walking around parts of downtown. We want to bring that same energy to the Old City. The stadium is a key element to that.”

The press release ended with a final push for stadium approval: “This is a really important decision for Knoxville. I am committed to bringing the hotel if the stadium comes.”

The proposed design for the hotel was developed by Elevate Architecture Studio out of Atlanta.