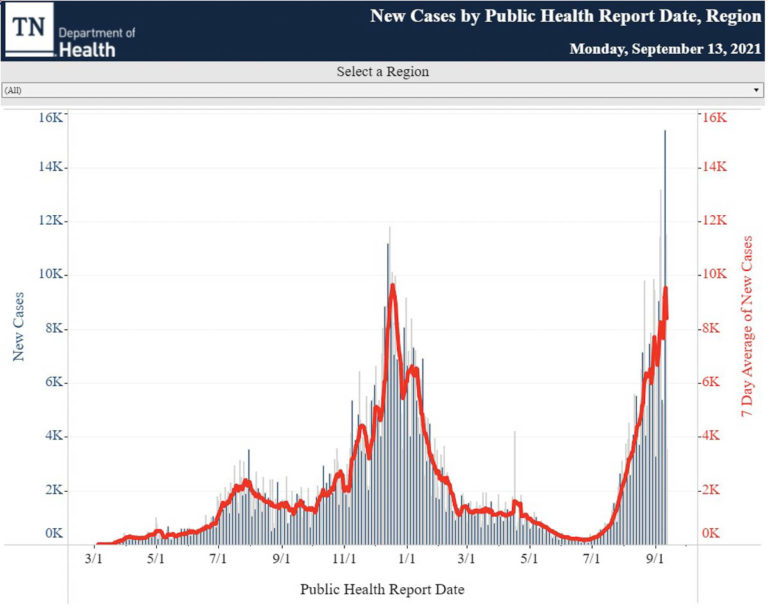 For the first time in several weeks there may be some good news beginning to creep in among the bad. It appears we may have hit a peak in hospitalizations, for example, though we’ll have to watch to make certain. Also on the good side, we continue to creep upward in vaccination levels though, realistically, we are not near the levels we’ll need to reach if we want to avoid future surges in infections. That said, Tennessee remains the worst state in the union for infection rates, in the country with the highest numbers of infections in the world. Not a good look.

In the days since the Friday report, the state added 5,219 cases Friday, 15,411 new cases on Saturday, 11,168 on Sunday, and 3,912 yesterday. The 15,411 cases added on Saturday represents the largest single-day number of new cases since the beginning of the pandemic. And it isn’t close. The previous high was 11,787 on December 16. The number from Saturday was the third highest single-day total of the pandemic.

The state has now recorded 1,154,966 cases since the beginning of the pandemic and leads the country in per capita cases. The seven-day average for cases is 8,406, up about 700 since Friday. Two days ago that average crossed 9,400, nearing the record of just over 9,600 set last December. The state has the highest rate of spread of any state in the country and, at 160 cases per 100,000 per day, it isn’t close. Second is Kentucky at 118 cases per 100,000. And our rate of spread is escalating rapidly, with a 78% increase in the last two weeks. Our current 7-day average is 547% higher than the same day a year ago.

Completed tests reported continues to be low relative to previous numbers, with the state reporting under 19,000 tests yesterday. The positive test rate has dropped to 17.67% for the day. While the drop is encouraging, the rate remains more than three times the target. The state, which once was held as an example of a good testing program, now ranks 36th in per capita testing and continues to drift downward.

If there is a glimmer of hope, it is in the hospitalization numbers which, though extremely high, have dropped for four consecutive days after months of daily increases. The concern I have is whether we can maintain this decline in the faces of the continually escalating numbers of new cases. 3,654 COVID-19 patients are in Tennessee hospitals, with 1,078, in ICUs and 728 on ventilators. As of the Friday report these numbers were a record setting 3,846 in the hospital, with 1,075 in ICUs, and 755 on ventilators. There are 152 pending cases.

Pediatric hospitalizations are trending downward across the state, with 65 children currently hospitalized with COVID-19, 19 in ICUs, and 9 on ventilators. The number hospitalized peaked at 86 on September 4. The number is still up-and-down, and is up from 60 hospitalized since Friday, so it isn’t a lock that this is part of a long-term downward trend.

The state’s vaccination dashboard is down, but the most recent numbers I retrieved before the problems, showed a slow increase in the seven-day totals of vaccinations, though they still lag where they were a week or two ago. As of Sunday afternoon, 113,200 shots had been given over the last seven days, bringing state totals to 51% partially vaccinated and 43.1% fully vaccinated. While helpful, this pace of increase will not protect us from additional surges until well into next year. The state ranks 44th in first shots and 43rd in full vaccinations. We’ve dropped a spot in full vaccinations since Friday.

Over the last week, the county has averaged 461 new cases per day, up from 443 a week ago. We are also averaging 148 probable cases per day. Active cases now number 5,957, up from 5,136 reported here on Friday. Yesterday, the number of active cases set a pandemic record at 6,555 active cases. 55,812 cases of COVID-19 have been confirmed since the beginning of the pandemic and 13,358 probable cases have been identified.

Demand for testing remains high and the state reports a 21.7% positive test rate for Knox County. The rate has remained in the 20% range for an extended period of time, about 4 times higher than it needs to be and about six times higher than it was in early summer. Average test return time remains in the three-to-four day range. The result in the lag between symptoms and getting tested, then between the test and the results, and then the results and KCHD notification, then the time for interviews and tracing, is that contact tracing is not currently effective, which is too often resulting in people learning of exposures as their recommended time of quarantine is expiring.

In the 19-hospital central east Tennessee region, 732 COVID-positive patients are currently admitted, with 176 in ICUs and 135 on ventilators. These numbers are up slightly from those reported here on Friday: 728, 181, and 131. The chart indicates we may have hit a plateau. While in the past this indicated we may have peaked, I have my doubts based on the subsequent surge in cases — which, coincidentally or not, followed both Labor Day and the resumption of high school and college football. Also reported, there are 6 available ICU beds of the 317 in the region.

Since Friday, the KCHD has reported 20 additional COVID-19 deaths, including 15 today. Today’s number is the highest number of deaths reported on a single day since the beginning of the pandemic, with multiple days reporting 10. Of the twenty reported since the last report, 2 people were 18-44 years-old, 6 were 45-64, 7 were 65-64, and 5 were 75+. Since the beginning of the pandemic, 749 Knox County residents have died of the illness.

Scott Barker wrote an informative article in Compass today, explaining why Knox County School numbers are so radically different from state numbers. The bottom line is that it is complicated, our systems are not coping well with the current deluge of cases, and the numbers reported on the Knox County Schools dashboard likely represent only a small portion of true cases.

With the above in mind, the Knox County Schools reported 375 active cases yesterday, including 300 students and 75 staff members. The number is down from 485 last reported here.

Many of the schools in the north, including those in New York City, just started school this week. With that in mind, I noticed the following, which I found striking in comparison to the lack of interventions within the Knox County Schools. It appears everyone wants children back in school, but while our schools refuse to put in place interventions designed to keep them there, the story is much different elsewhere.

New York City schools have relatively strong protocols for preventing spread of the virus, including vaccine mandates for all adults who work in the buildings. Children under 12 are not generally eligible for the vaccine, though some parents have found ways to get their children vaccinated. All students, teachers and staff will have to wear masks during the school day, regardless of vaccination status. The city also has aggressive guidelines for quarantining in the event of possible exposures, and it plans to test 10 percent of unvaccinated students and staff every other week.

The University of Tennessee is reporting 179 active cases, including 154 students and 25 staff members. The number is down from 190 reported a week ago.