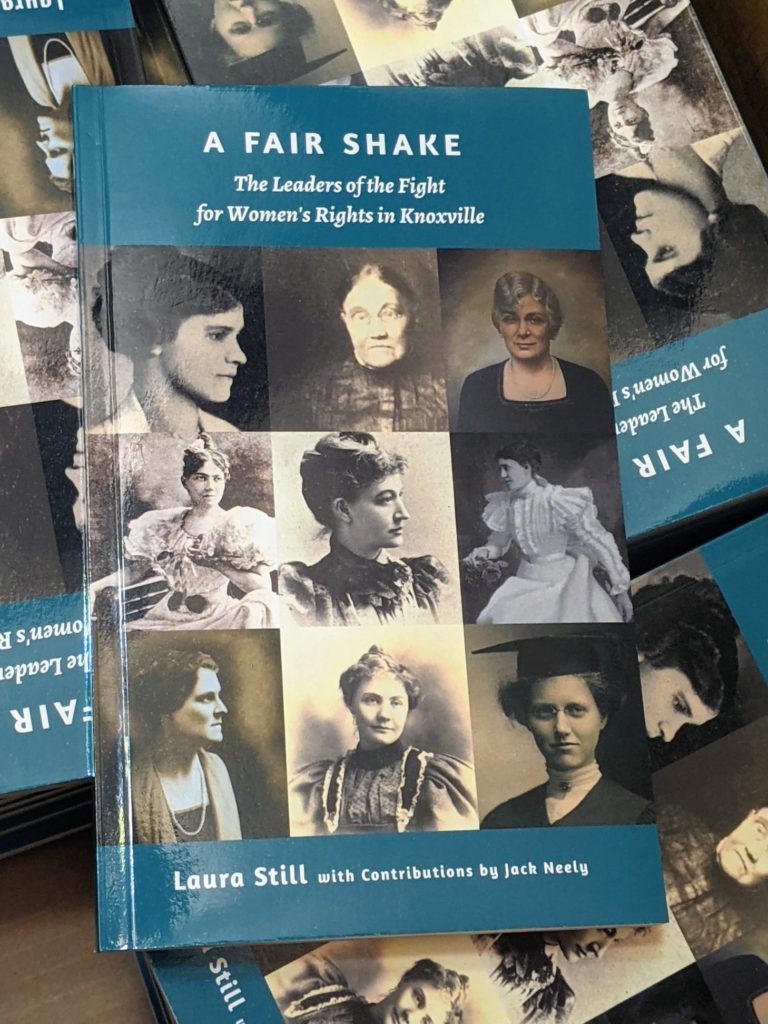 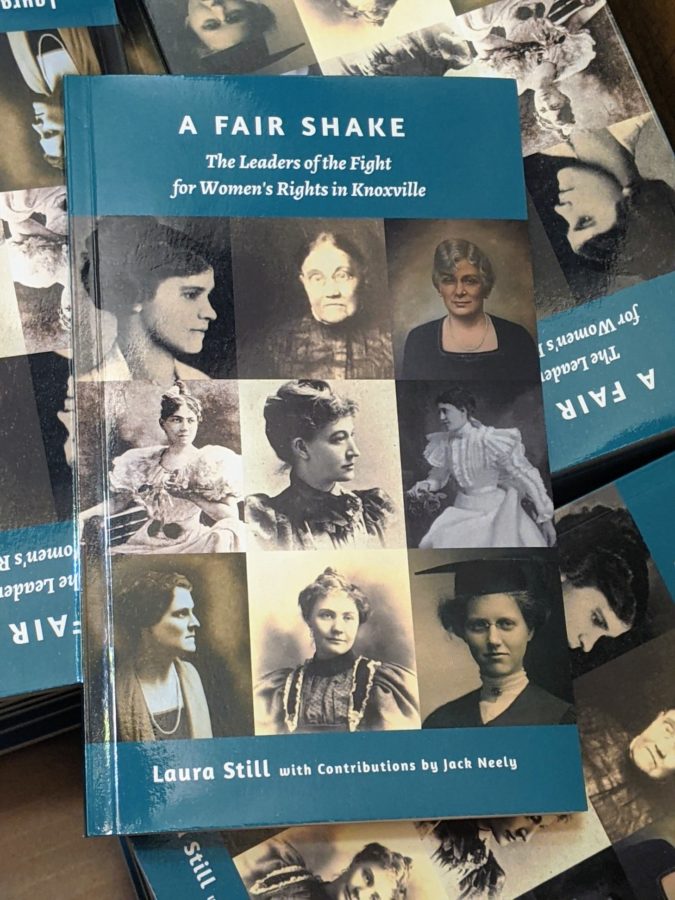 2020 marked the centennial of the passage of the 19th amendment to the Constitution, giving women the right to vote. Given the pivotal, last-minute role played by the state of Tennessee and by East Tennessee women particularly, a number of events were planned to mark the occasion. Unfortunately, a pandemic had other plans that took priority. Many of the events and celebrations were canceled or postponed.

Area writer and owner of both Celtic Cat Publishing and Knoxville Walking Tours, Laura Still, has written a book to help commemorate the efforts of many Knoxville women in the fight for women’s rights. A Fair Shake: The Leaders of the Fight for Women’s Rights in Knoxville explores the contributions of area women both on the local stage and, some of them, on the national stage. The book was written with contributions from Jack Neely and published by the Knoxville History Project. I sat down with Laura to learn about her journey and about the book.

She was born and raised in the tri-cities area, but considers her hometown to be Knoxville, where she has lived since 1980. She had graduated from ETSU with a dental hygiene degree and came to Knoxville for her first job. “This was the big city, so I didn’t take to it right away,” she said. Her plan was to get some experience here and move back “home,” but “Knoxville became my hometown. Knoxville is a big town with a small-town heart and after a while I realized that the city I was so afraid of had taken me in.”

She began to get involved in the community while raising her children, working first in her church and the children’s schools. She joined the Knoxville Writers Guild and began to read her poetry publicly in coffee shops and other venues. In the early 2000s she became more interested in downtown and would walk the city looking at the old buildings and dreaming about what could be. She met and became friends with Andie Ray who owned Vagabondia on Market Square.

She read Jack Neely’s “Secret History” column in Metro Pulse, and she would look for the locations he mentioned. She was working in Vagabondia by this point and Andie encouraged everyone who worked there to get to know the city better. Her interest in the city and its history grew. She was introduced to Jack and she talked to him about how much that relationship has meant to her.

“When I wanted to do the tour business, I wanted him to do it,” but he insisted she could do it. He gave her a full set of his books and talked with her about themes for tours. She said he gave her good advice in suggesting she not try to do one tour and include everything. He told her there were too many stories for that. She determined to offer a range of tours (which she still does), from Misbehaving Women (one of her most popular) to Musical History, Gunslingers, Civil War, and many more.

“We don’t run out of stories . . . The storytelling part of it pulled me in. I was a poet and a playwright and I never thought myself as being able to write a local history book until I wrote A Haunted History of Knoxville. I realized that people would read this.

She started Knoxville Walking Tours in 2012 with two tours. She said they started with Early Years and Gunslingers, both of which they still do. She said she learned a lot about how much to talk, when to end a story, and the general flow of a story. She said for the first five years she was adding another tour or two a year for the first five years. She added a second ghost tour after her previous book came out and demand surged. She said she is always researching and making tours more accurate and better as she learns more. She said the facts are almost always better than the legends.

She said the first book came about when a national company wanted her to write a haunted history, but she balked at their contract. She decided to publish it herself. She said it remains their best seller and continues to sell, particularly each year as Halloween approaches. After the book, her reputation grew as a local historian. She continued to research and write new tours and find new topics.

In 2018 the Knox County Public Library called a meeting to announce the availability of grants to people who wanted to do projects for the centennial of the 19th amendment. She had already been considering a suffrage tour and done a short version of her “Misbehaving Women” tour, which included some of the local women who were important to the movement. She would grow it into a 90-minute tour as a part of the grant.

She had by then become partners with Paul James and Jack Neely at the Knoxville History Project, with a percentage of ticket sales from her tours going to the organization. Paul had the idea of applying for one of the grants to write a book on Knoxville women and their roles in suffrage and women’s rights, but he suggested that a woman should write the book and pitched it to Laura. She agreed to the joint project.

Winter 2020 she planned to do the research, with a launch with a tour and the book coming that spring to commemorate the tour. A virus coming out of China had a different idea. She used the pandemic to take a deeper dive into topics like the Female Academy. “I had heard different versions of the story and wondered which of them were right? It turned out none of them were.”

She determined that the academy had a profound influence on the fact that so many people in east Tennessee supported suffrage. She said it was not a finishing school but had a rigorous academic program educating women in hard sciences, logic, rhetoric, chemistry, physics and more. “I think that’s why the women around here were so prepared when the suffrage issue became something to fight for.” She does point out this kind of education was available only to white, upper-class women.

The temperance movement also played a big role. Many of these women were first involved with temperance and then came to the suffrage movement. It was one reason distillers opposed suffrage, as they feared if women got the vote, they would vote to make alcohol illegal — which is precisely what happened. She said the temperance movement taught them to organize, which they used to get the vote.

She said the reform movement among the women was inspired by the abuse of women, the lack of ownership rights for women, and the poverty resulting from some of those abuses. They wanted to make a difference, and many of them left their mark on our city in tangible ways that go beyond their involvement in the suffrage movement. Florence K. Payne, for example, founded the Knoxville YWCA in response to the victimization of women she witnessed in the part of town where Laura and I had coffee — the Old City, known then as The Bowery and the center of all manner of vice in the city.

She said she was able to set some facts straight, such as the fact that the Women’s Academy continued well after the Civil War, contrary to accepted local history. Lizzie Crozier French was principal there (her sister Lucy was co-principal) for a brief period. One of the great stories in the book has Lucy confronting local authorities when they attempted to lock them out of the courthouse. Lizzie and the other women you’ll find on the suffrage statue are discussed in the book.

But the book isn’t all about the best know figures of the time. “I tried to address members of the community who were black. They had to keep a low profile. They were discriminated against as blacks and as women, but it was hard for them to get into the same kind of trouble these privileged white women could get into. I wanted to redress that balance a little bit. They did some great work behind the scenes.”

She said the women of color began their own organizations, some of which evolved into civil rights organizations. One of my cool moments reading the book came as I sat on my balcony. I learned that in 1891, the Afro-American League, a forerunner of the NAACP had their national convention in the Logan Temple, an A.M.E. church located on the site of the current Marble Alley Lofts — which are located within sight of the balcony where I read this fact. Cal Johnson’s second wife, Maggie Erwin Johnson was involved in the organization and was a national delegate.

“It’s been quite a journey,” she said, pointing out that often the papers didn’t refer to the women by their names, but rather by their husband’s name with “Mrs.” on the front.

The book is available here or here, and a launch of sorts happens tonight via zoom in conjunction with the Knoxville History Project. They will also be available on the tours.