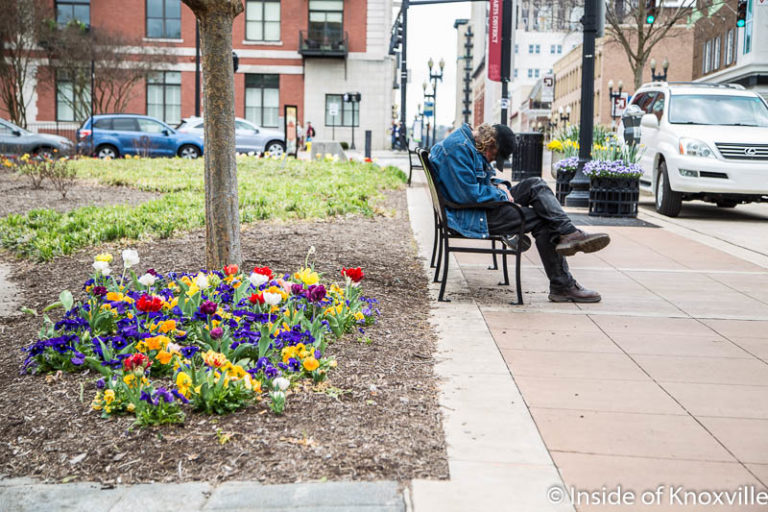 At the quarterly meeting of the Mayor’s Roundtable on homelessness, a number of downtown residents and business owners expressed concerns that have been increasing in recent months regarding issues related to homelessness in the downtown core. The gathering of the array of agencies dealing with various components of the issue is conducted in order to keep agencies updated regarding the activities of the others and to foster coordination of efforts.

The meeting began with updates on numbers of homeless individuals in the city, sorted by categories, such as those entering the system, those needing services only, those needing emergency short-term shelter, long-term shelter and more. This data and much more can be found here on the city’s dashboard. Essentially, the data suggests that the total homeless population has not increased dramatically, but there has been a shift to more “unsheltered” homeless individuals.

Efforts are continuing to provide assistance as much as possible. An application is pending for a HUD grant, for example, that could range from $1 to $15 million to directly impact youth homelessness. Sixty-three housing vouchers have recently been obtained through the Cares Act and more are being sought. A concern expressed by all groups was a limited access to affordable housing options, though Becky Wade, Housing and Neighborhood Development Director, said help is coming in the form of Burlington Commons which will provide more housing.

Mayor Kincannon introduced the issues surrounding the downtown homeless population noting “an uptick in unsheltered homeless people downtown and elsewhere.” She said she has “heard from many,” regarding  issues of open drug use and sales, as well as public “sexual behavior.” She said she’s gotten reports of resulting increases in trash and needles. She said the struggle seems to be more with the 10% to 15% who are not sheltered.

Jessica Strutz, co-owner of A Dopo Pizza pointed out that hospitality workers are often in the line of fire in dealing with the homeless population. She said they often come into the restaurant wanting food or wanting to use the restrooms and then can become difficult. She said they’ve tried to hand out food, then decided that was counterproductive.

She asked if there might be training in how to help them and to defuse situations. She said the staff doesn’t want to call police, but she feels trapped between them and customers who want the sometimes unruly visitors removed. She said calling 911 often gets a very slow response and the presence of police can agitate the individuals.

Avi Zanetti, downtown resident and owner of Kopita, said while the focus on helping homeless people is fine, there also needs to be a focus on helping businesses and residences who are dealing with serious problems from the population. He said he sees a smaller police presence downtown at the same time he is seeing an increase in the number of homeless people he does not recognize.

He said it is his understanding they are not to be within 25 feet of a business, yet they are often clustered outside The Market. His business has an adjacent alley and it is being used for drug use and as a bathroom. He expressed the need for more enforcement. He reiterated that he had little problem a year or more ago and that he knew many of the people who are homeless and around downtown, but the most recent people who have arrived are much more difficult.

Several residents of Regas Square expressed concern regarding what they see happening in their area, particularly under the I-40 overpass. One resident who has lived in and around downtown for decades said the last year-and-a-half is the worst she has ever seen. She said complaints seem to get little response.

Marie Tugwell who has worked downtown for Dewhirst Properties for the last twenty-five years agreed the situation is the worst it has ever been. She said they’ve had to hire additional staff simply to clean up the trash that gets dumped from the bins and “the human waste.” She said they’ve had to repeatedly replant their planters and have found needles in the plants and elsewhere on their property. She also said this is a new group and said three were arrested for using drugs openly outside one of their properties.

A woman who lives on Market Square said she was confronted by a naked person and that the people who are the most difficult seem to feel very comfortable. She said she has been followed by panhandlers after telling them “no.”

A representative of the police department said they are hiring three more co-responders who specialize in mental health. He pointed out that arrests are usually misdemeanors and result in being in jail for a couple of hours, followed by a fine which will never be paid, so there is no deterrent. He also said the police get mixed messages about how much their presence is wanted on the street.

Several of the members of the roundtable said that a shortage of slots in recovery programs means fewer people get help. And that is if they want help. The law prevents forcing people into a program they don’t want and sometimes they aren’t ready to make that decision. They added they have some people who refuse housing because they know their addiction will prevent them from being able to keep the shelter once they get it.

Michael Dunthorn, Homeless Program Coordinator for the City of Knoxville, pointed out that other cities he contacts are experiencing similar shifts in their homeless population. The meeting ended with assurances that the problem, particularly downtown, will be addressed.