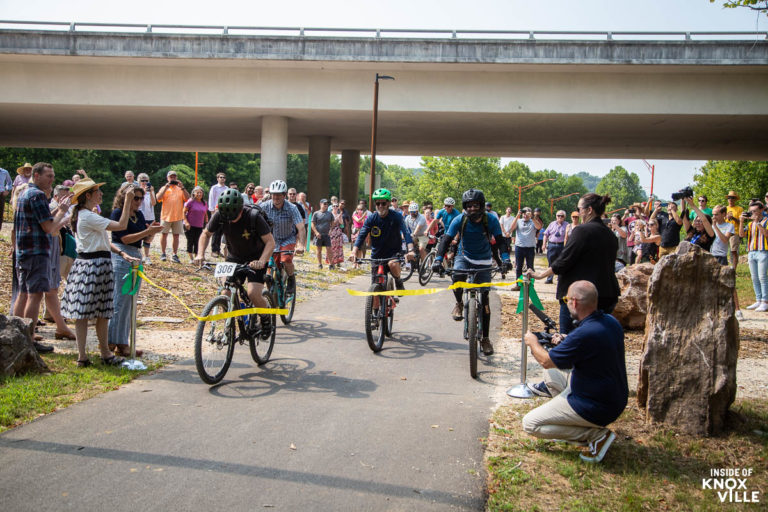 When last I wrote about the park, which feeds directly into the Urban Wilderness with over 50 miles of trails and a 500 acre wildlife, it wasn’t quite ready for unveiling. Winter had the area looking a bit stark and the lush canopy of trees makes it shine quite a bit better. There is also an excellent parking area that is waiting at the end of the James White Parkway, which wasn’t available when I drove there last January. Now easy parking is available five minutes from downtown with access to the riding park, but also to the entire Urban Wilderness.

On Friday a crowd gathered at the spot for the official opening, including a ribbon cutting likely different than any before it, with mountain bikes leading the way through the ribbon. Included in the crowd were several current City Council members, as well as Mayor Kincannon and former mayors Madeline Rogero and Victor Ashe.

Total cost for the park is estimated to be $10 million when it is completed. Phase one is now complete and includes the Baker Creek Bike Park, wayfinding signage and the aforementioned parking. It also included other infrastructure for the park, including a road that extends from the parking area to Baker Creek Preserve, making for a much more direct route to that spot. Lighting and utilities were also included.

The second phase, which is scheduled to begin this fall and winter will include construction of an “adventure playground,” as well as restrooms, shade and picnic areas and other gathering spaces. Not mentioned was the proposed greenway connection to downtown via the James White Parkway. While driving to the Gateway Park is easy, biking or walking there is semi-treacherous. Following through with the proposed green way to the spot would be an amazing addition to downtown and attraction to tourists.