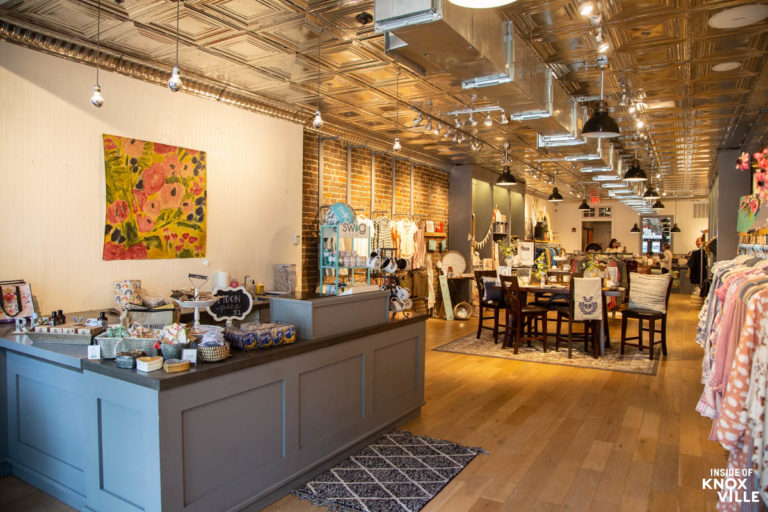 Just a few months after the closure of Tailgate at 23 Market Square, the space was taken this weekend by the third location of Fruit Jar Alley. Founded in 2017 by Allison Manes, the first location was in her hometown of Newport. A second opened in Pigeon Forge last fall. She got the key to 23 Market Square last Friday and was open for business on Saturday.

Allison attended UT and got her degree in Textiles and Merchandising. She later became an accountant and operates a tax preparation business, Smith-Manes Tax Service in Newport. Her husband, a funeral director by trade, plays “Digger” on the Discovery television show “Moonshiners.” He had worked with Popcorn Sutton and he also stars in the spin-off show, “Master Distiller.”

She wanted to open a store in downtown Newport in a location once known to locals as “Fruit Jar Alley.” The name was a tip of the hat to the fact that the district was known for its bars. The city of Newport owned a couple of buildings in the area that she describes as “a bunch of dilapidated buildings that needed help.” After unsuccessfully attempting to get one of those from the city, she saved the name, but saved the related logo.

She switched gears and found a building owned by the local theatre guild and asked if she could lease it for a pop-up shop. She stocked up on t-shirts from the show and a range of other times. She opened the store on November 24, 2017 and was overwhelmed with the response. “It was phenomenal. I’ll never have another day like I had that day . . . Newport was starved for something like that. The couple has since purchased and renovated the building and some of the television show has been filmed there.

About four thousand square feet (twice the size of the Market Square shop) is dedicated to the store. Another portion of the building contains the tax business. “The other half of the building is the ‘Back Alley Grainery’ (which they also own) which is a full beer and wine-making store.” She says in roughly the next six weeks, they will carry beer making supplies in the Market Square store, as well. She says they will “have everything you need to make beer.”

In September 2020, she had been looking for an expansion opportunity. Her husband was away filming and she told him she was going to expand and took out a lease on the Pigeon Forge location. She got the keys on the Tuesday after Labor Day and opened on Friday, September the eleventh and her fiftieth birthday. “We didn’t get to go to Aruba or Napa or anywhere I wanted to go, but we opened a store.”

She’s already considering a location in Johnson City. She had planned on a Charleston, South Carolina location, but that didn’t work out, so she set her sights on Knoxville. She was willing to renovate a building, but this one was move-in ready. She said David Dewhirst has been great to work with.

“It’s lovely in here. The building itself is lovely . . . I’m not going to have it if it doesn’t have character . . . I specialize in women’s apparel, but I do have men’s apparel.” She says t-shirt sales are a big part of the business, much of it with a Moonshine theme. She says the inventory is mid-priced, “young to old, classic, size small to 3X.” She also has lots of “home-goods, jewelry and accessories, handbags.” Her main line of men’s clothing right now is by Heybo and she says she’ll expand the men’s selection for downtown. She also carries some children’s items, though not clothing.

She also said they will have a great selection of University of Tennessee apparel, though she said it won’t overwhelm the store. Christmas is a highlight for her and she promised something special. Beer making kits and other supplies are on their way. “I’ll have a little bit of everything.”

The shop is open now and you can learn more on their website, and follow them on Facebook and Instagram. Hours are 11:00 am – 7:00 pm Sunday through Wednesday and 11:00 am to 8:00 pm Thursday through Saturday.