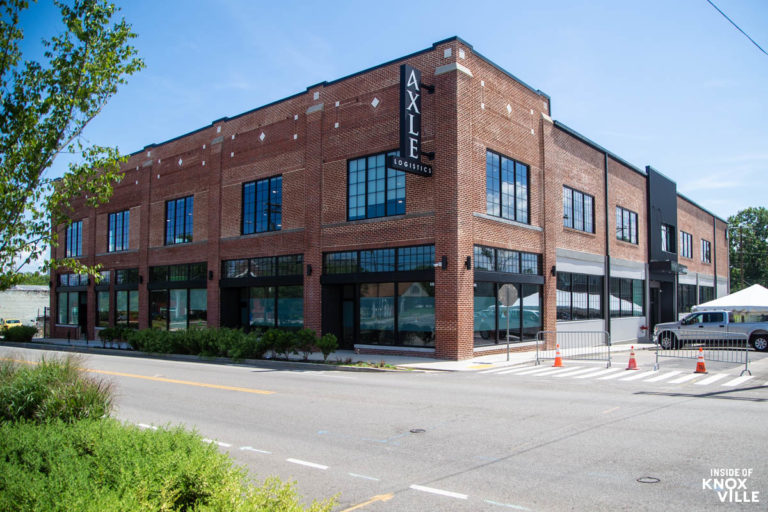 In September 2019 I introduced you to Axle Logistics, a company founded by friends Jon Clay and Drew Johnson. The two grew up together in south Knoxville, graduating from South Doyle High School. They founded Axle Logistics in 2012, growing it in seven years to a top 100 logistics company in the U.S. (out of 18,000). Their growth had led them from a small office, to a larger space in downtown Knoxville, to the purchase of the Hull Dobbs Building on Central Street.

A ground-breaking was held in February 2020, just as the pandemic was becoming a reality. With almost 100 employees, they desperately needed more space. They hoped to have room to grow. Despite the pandemic, the design by Design Innovation Architects and was realized by Denark Construction. The company grew rapidly over the same period and will hit their 200th employee this summer.

As a result of the more rapid than anticipated growth, the planned retail space along Central Street was shifted to more office space to accommodate the needs of the employees. Additionally, the company purchased the Brown Appliance building just across Pruett Place and also facing North Central Street. The building will be transformed to office space and further development of the block is planned.

The Hull Dobbs building is now a luxury work place, just as it was envisioned by the owners. Ali Fraley, Director of Strategic Development, was kind enough to show me around the building and there was much to be seen. We started in the lobby off the Pruett Place entrance with its suspended staircase climbing to the primary work spaces.

She said projections for this year included hiring an additional 100 employees and they have hired 75 in the first half of the year, and projects the company will have 200 employees within the next few weeks. She explained that the company growth plan is to continually add people as needed to serve clients, so there is no big wave of hires, but rather a steady stream of new employees.

Off the lobby to the rear of the building is a “swag room,” a small market with snacks and a full gym with weights, stationary bikes, treadmills, locker rooms, and much more. To the rear of that room is a partial basketball court. Both exercise rooms were in use by employees when I visited. A large dining hall with a bank of microwaves also sits on the rear of the building. Just outside, in the space where the large spiral ramp once sat, is a putting green with outdoor tables. The ramp could not be saved due to structural issues.

In an alley to the rear of the dining room, food trucks come on a regular schedule.  Lunch is catered by the company on Thursdays and no food trucks are scheduled on Fridays in order to allow employees to support Central Filling Station and the food trucks parked there. The lower level and the north side of the front of the building are still under construction. Completing the bottom floor is lounge room with a pool table and ping pong table, and a large office space for accounting and finance.

The majority of the team works upstairs, with the entire floor devoted to work spaces, offices, and conference rooms. Logistics and operations are located on the floor, with employees grouped into teams. When new clients are on-boarded, a bell is sounded and the floor cheers. The scoreboard from U.T.’s old Stokely Athletic Center adorns the wall and also sounds throughout the day in celebration.

Explaining that transportation needs continued apace during the pandemic, the company didn’t really experience a downturn. Employees worked from home briefly, but then were allowed to return as they felt comfortable. She said they had to shift in order to be responsive to clients who did less, did more, or shifted to different models themselves. As a privately held company, they were able to make changes as needed.

“It was amazing to work with our teams to help propel the economy forward in getting medical equipment” and other needed items to the places they could be utilized. “We definitely grew because of that need.” The business that grew during the pandemic has been retained thanks to the relationships they built during the pandemic.

Clearly, we can expect to hear much more from this dynamic company as they grow and put Knoxville on the map in an industry that is largely behind the scenes.