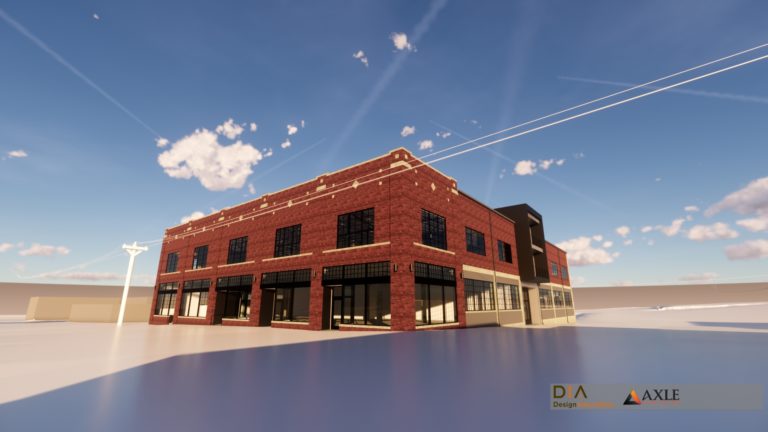 Axle Logistics may not be a household name, but it’s one of Knoxville’s biggest recent success stories. Founders Jon Clay and Drew Johnson started the company in 2012 and it has grown to be one of the top 100 (out of 18,000) logistics companies in the country. The rapid growth of this home-grown business has prompted acquisition of the Hull Dobbs Building at 835 North Central Street, with plans to completely renovate and re-purpose the building.

Graduating a year apart at South-Doyle High School, they attended the University of Tennessee where Jon obtained a degree in political science, while Drew earned his degree in supply chain management. While Drew planned to work in logistics, Jon had no such plans, but found himself doing just that after graduation.

Jon worked in Knoxville for Chattanooga-based company Access America Transport, which was purchased by Coyote Logistics and then by UPS. Drew worked for JB Hunt, but eventually left there and worked for a series of startups. The two continued talking and in 2011 they made the decision to start their own third party logistics company, bridging the gap between customers needing to ship goods and the companies and individuals who could fill the need.

At the end of 2011, the two took a skiing trip out west and returned to start Axle Logistics. They initially had three financial partners who provided funding to start the company and purchase necessary equipment. They got a small office off Middlebrook Pike and spent the first month working on obtaining the necessary insurance. Filled with confidence, but no employees or customers, the two began cold calling companies and setting up relationships with truckers and trucking companies.

In July 2012 they got their first significant customer just as their money was about to run out. In August they hired their first employee who would do both sales and operations. That’s been their primary model since with new employees, though they now have some devoted to either sales or operations. The company continued to grow and they added more employees, expanding their office space as they went.

In 2014, having outgrown their original location, they moved into the Langley Building at 520 West Summit Hill Drive and took space and the option to expand. They had eight employees and took 4,000 square feet, so expansion seemed ambitious, at a minimum. By 2016 they had grown to 30 employees and exercised their right to additional space, adding 3,500 square feet on another floor.

They made the move to downtown because their challenge is not customer acquisition or transportation acquisition, but rather the relentless pursuit of talent. The young professionals they needed want to be in an urban environment. A number of their employees live downtown and others can easily get into the city. When they realized they were going to outgrow the available space in the Langley Building, they knew they wanted their own building in order to make it appealing to their employees and that it had to be in or near downtown.

Interested in taking an old building and bringing it back to life, they searched and ultimately landed on the Hull Dobbs Building at 835 North Central Street. It’s a huge investment, but one they feel is necessary. Final costs for acquisition of the building, parking lots and construction is now projected to approach $15 million. They see it as part of their mission. “We love Knoxville. It’s our community and that’s why we’re here.”

They went under contract for the building in May 2018 and, after months of due diligence, closed in November 2018. The time since has been spent developing architectural plans, working through applications for a facade grant and remediation inside the building. Sanders Pace did the original concept and Design Innovation Architects developed it and did the final design. Conversion Properties is the developer and will manage the project, with construction by Denark.

The building was constructed in 1920 and served as home to seven different “motor” companies through its early years. An automobile ramp to the second floor will be preserved. It also served an unknown purpose with the Manhattan Project in 1942. From 1958 to 1971 it was the Hull Dobbs Ford Dealership. Over the years it suffered several fires and a suicide on site by the owner of one of the businesses. Knox Rail Salvage was the last business to occupy the space.

Joe Petre of Conversion Properties has known Drew from early on and Drew rented from him when he was in college. They reconnected when the company moved into the Langley building where Conversion has its headquarters. When Axle started looking for a new home, Jay Cobble helped them broker a deal. Joe helped guide them through securing a 15-year PILOT due to the number of jobs Axle will deliver.

Both the city and the county enthusiastically supported the project, according to Petre. Axle was awarded a $200,000 Historic Preservation Grant. $50,000 of that had been awarded to the previous owners (835 N. Central, LLC, aka Henry and Wallace) and was returned when they failed to develop the building as promised. The group agreed as part of the terms of the grant to apply an H1 overlay on the property.

Plans for the building include retail on the first floor along Pruett Place and perhaps along North Central Street. The owners are installing a grease trap on the chance that a restaurant will use the space. The back side of first floor will include a lobby, gym, locker room with showers, break room, swag store, and small basketball court. The winding ramp will be transformed into a rising corridor lined with conference rooms. The top floor will be filled with work stations, offices and meeting rooms. A mezzanine will be added with executive offices and meeting rooms. A beautiful central stair case will flow from the lobby through the second floor and mezzanine up to a roof top deck for employees.

Screens throughout the second floor will display constantly updated data regarding the business and sales. In a cool touch, the owners have purchased the scoreboard from UT’s Stokley Athletic Center to keep “score” of sales. Historic windows will also be returned to the second floor north facing wall. A new, modern, feature will be introduced through the core of the building. National Park Service regulations for historic buildings require that any additions be clearly distinguishable from the original design of the building.

Construction is expected to be complete and move-in ready by about this time next year. Currently occupying about 14,000 square feet, the new building will give them about 44,000, with about 8,000 planned for retail, 5,000 for IT in the basement and the remaining 31,0000 square feet for work space and amenities.

Meanwhile the company has grown to 86 employees and more are being added each month. By the time they occupy the building they expect to be around 130 and have plans to grow to around 265 employees within five years. They constantly recruit through their relationship with the UT Haslam College of Business.They work hard to keep turnover low and most recently it has been around 5% a year. They are also proud to have a number of employees under 30 years old who are making six-figure incomes.

The company has expanded to Chattanooga and plans include adding several other cities such as Dallas and Chicago. They feel the model will work in any location with an adequate supply of talent for their business. The company ships throughout Canada, the U.S. and Mexico, as well as the Caribbean, working with companies needing to move one pallet or 500 truckloads a month. They work with small companies, the U.S. government and companies that are household names shipping all manner of goods. They have relationships with 40,000 operators. They are on track to make $100,000,000 in sales this year.

“We are proud of what we are and want employees to be proud. We want a cool culture where they take ownership. It’s entrepreneurial and we encourage them to carve their own path. Year-over-year we are a new company. It’s important that the culture not be obligatory (to please a boss), but that because of the pay structure and autonomy they are working more for themselves than for ‘the man.'”