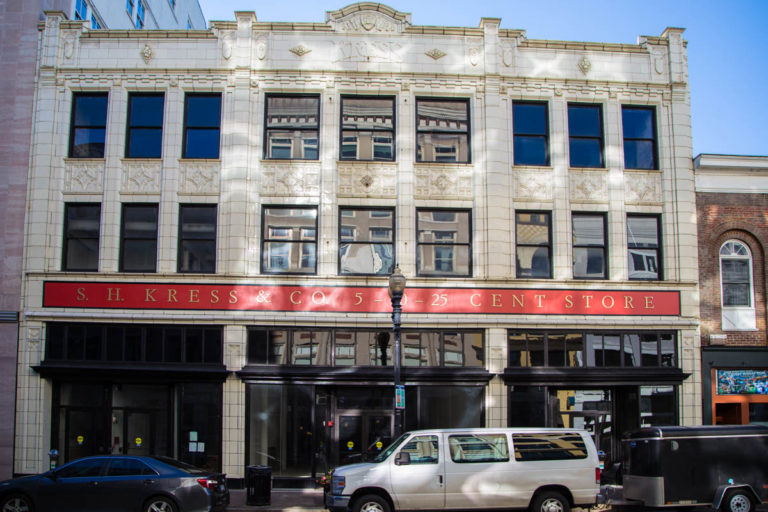 The journey for the Kress Building at 417-421 South Gay Street has been a long and winding one, if not tortured at times. In the years since its use as a S.H. Kress and Company department store, the building housed Jay’s Megamart for years before being purchased slipping through multiple hands on its way to ownership by Thomas Boyd.

A tenant has been announced for the largest retail space, as Frothy Monkey, the Nashville based “all day cafe,” will actively begin preparing the space for occupancy in 2022. Precise dates are in flex as a complete build-out and permitting are yet to come. The first location of Frothy Monkey was in Nashville and they now have four locations there, along with locations in Franklin and Chattanooga.

I spoke with co-owner Jennifer Sheets, who said the company had been eyeing the possibility of a Knoxville location for about four years. They looked at a number of locations for the best fit and found that in the Kress Building on Gay Street. Coincidentally, she told me, one of the Nashville locations is in their old Kress Building.

She said the company is very “neighborhood focused,” so when they began their search for the right location in Knoxville, they looked for a place with “walkability.” She defined it as a place where you’d find lots of “strollers and dogs.” She also said the company is invested in historic preservation, for which they won an award in Franklin.

She said the company is also excited to be located near Knoxville’s art and theatre districts and mentioned the allure of having the Tennessee Theatre just down the road. They expect to attract a good mix of residents, local visitors and tourists.

She said the concept has “evolved over time,” but described it as an “all day café.” She said on a visit to any of their locations you might find “people working on computers, meetings, and brunch parties.” Partially in response to the pandemic, they’ve added table service over the last year-and-a-half and she sees that as a feature they will retain.

The independently owned business operates as a “specialty coffee roaster, and wholesale bakery.” The Knoxville location, according to Ms. Sheets, will operate similarly to the other locations, which open generally from 7:00 am to 9:00 pm, every day of the year with the exception of Thanksgiving and Christmas Day.

Breakfast and brunch are served every day until 5:00 pm, lunch is offered and a dinner menu is available after 5:00. In addition to their own roasted coffee, they will offer craft beer, wine and cocktails. The food and drinks “are made from scratch using original recipes and thoughtfully sourced ingredients from regional farmers and producers whenever possible.” Food will be available for in-house consumption or take out.

Ms. Sheets said they are very thank and grateful for the support they have received and they are excited to become a part of downtown Knoxville. You can learn more about the business at their website and check out their menu here. You can also follow them on Instagram, Facebook and Twitter.