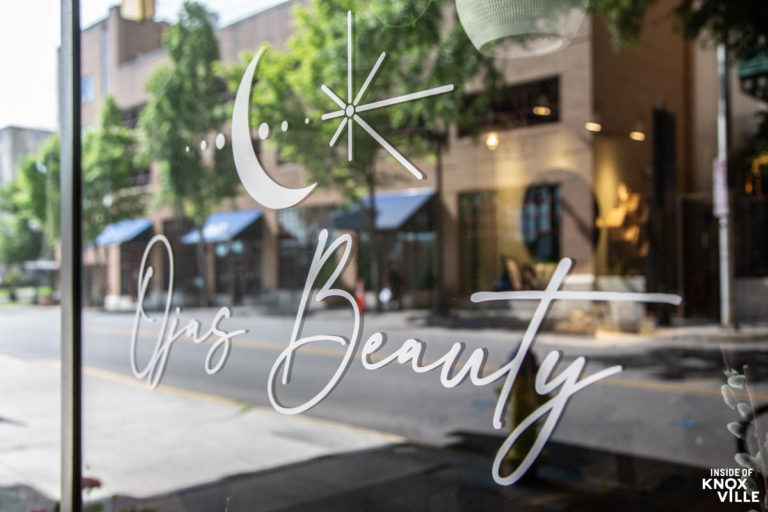 Karla Albritton has opened Ojas Beauty at 525 Union Avenue. She has taken the lease from Hannah Easterly, who opened Wild Lavender at the location almost six years ago and has recently decided to move to her next chapter. You feel a comfortable familiarity when you walk into the new business, but there are small changes, as well.

Karla is originally from Newport, Tennessee, where she graduated from high school. After about five years in Johnson City, she moved to Knoxville where she has lived for the last eleven years. Of leaving Newport, she said she was looking for something more. She had practiced yoga on her own in Newport (watching a VHS tape of Ali McGraw), for example, but was delighted to join a community of practitioners in Johnson City.

By then she had attended Walter’s State Community College and had become a nurse. She took a job at Medical Center there as a surgical nurse and continues to work part time in the profession at the Knoxville Orthopedic Surgery Center. She married and had a son while in Johnson City and the family moved to Knoxville when her now ex-husband was offered a job in the city. She was ready to move to a larger city and loved Knoxville from coming here as a child.

Several years ago, she became interested in esthetics, but questioned the idea. While waiting for her table at J.C. Holdway several years ago, she saw Wild Lavender and wanted to know more about it. Once home, she got online and made an appointment, came in and loved Hannah. Hannah encouraged her to follow her impulse to study esthetics, which she did, attending classes and graduating from Aveda.

She said she did not have a particular goal in mind. She had taken classes at Glowing Body to become a yoga instructor and taught a bit. For her, both practices incorporate taking care of oneself and “I just don’t think people have good rituals around taking care of themselves.” Once out of school, in January 2020, she opened a booth at Sola in Bearden.

She said she was told very clearly in school that she should not graduate and start a business right away. “Certainly not during a pandemic.” She took more coursework, including oncology esthetics, during the pandemic to broaden her skill set. She said owning a business was a clear idea for her even before graduation.

She said she gets her hair cut at Sola and when she saw they had an open booth, she took it. She started the business last August, which was when the work was allowed once more. As fate would have it, Hannah came to see her there and got a facial. She liked it, so when she decided she was leaving Wild Lavender, she asked Karla if she would be interested in setting up her business in the location.

She could not believe the opportunity was presented to pursue her dream in the place where it had started. She jumped at the opportunity and opened May 1. She’s continuing to do facials (check out her “moon” facials) as Hannah did before and says, “I’m loving it. I’m just making it my own place.” She is using her yoga experience to offer private yoga lessons and she is considering offering workshops. She expects it to evolve and is excited at the possibilities. She said it has been excited and added, she could not be doing this without the support of her husband, Josh, and her son Oliver.

She continues to offer Botonia plant-based products, as Hannah did, but she is also offering Isun, an organic line of skin care products out of Colorado. She also has products from Dermaviduals. She can also do eyelash extensions.

She is working on hours. She can’t open the store to walk-in customers when she is doing a treatment. She is offering appointments online for either shopping or treatments and she is considering open hours on Wednesday for shopping. Appointments for either are available 9:30 – 5:00 on Monday, Noon to 8:00 on Tuesday, 9:30 to 5:30 on Friday, and 9:00 to 2:30 on Saturday.

She says she have “pop up shopping hours so check Instagram for that . . . sometimes I am just going to stay later on Saturdays and just open the door and chill and I’ll put things like that on social media while I’m figuring things out.”

Of having a business downtown, she said, “I grew up with parents who loved antiques, so we went to flea markets and the really cool antique stores. My dad would refurbish the old cabinets and things and I fell in love with all things vintage. I have a fondness for cool, unique people as well as places. Downtown has that vibe and I love all the character of the buildings. I am so excited to be a part of the culture downtown.”

“Ojas” is a Sanskrit term meaning “vigor” or “vitality.” Karla described it as the glow of health, happiness, and energy. She wants to help people find that glow. “I just want to make a space where people feel comfortable and enjoy coming to and to help them live their lives more fully.”