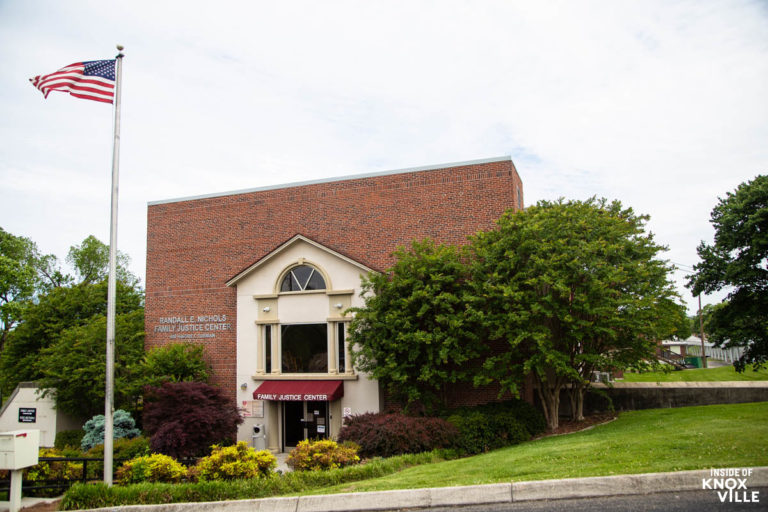 Just over the hill from downtown, the Family Justice Center has been helping families in the city since 2006, thanks to an initiative first promoted by the Bush administration. Our center was one of the first established and helps hundreds of individuals and families each year as they navigate through domestic violence. I sat down with executive director Kathryn Ellis to learn more about the center and their current financial campaign.

Dr. Ellis (she has a Ph.D. and J.D. degrees) previously worked with Legal Aid of East Tennessee before becoming the director at the FJC last fall. She utilized her doctorate in History to teach at the college level for years before returning to school to get her law degree. She worked for years with domestic violence work at Legal Aid so it was a natural evolution for her. She was familiar with the FJC and has worked with advocates all around this end of the state.

“Most of what I’ve done is work with people, figure out what their needs are,” and then how to meet those needs. “Domestic violence work is something that I ‘get.’ Not everyone can do it. There are people who have the compassion and empathy to do it, but . . . it burns them out. I think there is probably a small subset of people who have” the skills and ability and can “do it long term.” She says she never goes home without feeling that she helped someone that day.

She said, “Historically, victims of family violence would have to go to the police department, to DCS, the YWCA, Salvation Army” and more to get the help they needed. She said in Knoxville, it could be as many as twenty stops to get their needs met. “For someone who has just literally fled their home, probably has children in tow, there might be an animal they are concerned about, they are scared, they are injured, they don’t have anything with them,” it can be overwhelming to navigate. Additionally, she pointed out that many of the victims of domestic violence do not have transportation.

The idea is to have a centralized place where all the needed help can be accessed easily and quickly. One person guides each client through the maze of possible services, helping them establish contact and get the assistance they need. They do not need to either drive to or call each provider, as that is done for them.

She said a typical client arrives wanting an order of protection or some other assistance. The Family Justice Center staff, or “navigator” helps them understand the support services which are available and helps them decide what help they most need. Some of the services are available in the building, while others are located elsewhere. They may need food, shelter, gasoline, lock changes, translation services or even transportation to and from the center (they have a Lyft account and bus passes).

Once their needs are clarified, they are placed with a law enforcement or non-law enforcement advocate, such as the YWCA or McNabb Center, depending on the situation. The advocate walks them through paperwork and connections. Abuse investigators with the police department have offices inside the center. They also have food, toiletries, toys and more that a family might need. In two hours, they can get all that and connect them up with any of their forty off-site partners which are appropriate for the situation.

The center is equipped to deal with domestic abuse, child abuse, elder abuse, and even, she added, animal abuse. Typically, other agencies direct people to the center as their first step toward getting help. Law enforcement and first responders also encourage victims to contact them.

She said it was intended to make the process easier for clients, but it has also made it easier for agencies as screening is completed at the FJC and referrals to the other agencies are more likely to be appropriate to their services offered. Services are confidential within the network of providers. In the past, these connections to make calls and visit agencies, could have taken days.

It all came about when grant proposals went out in 2004 and began distribution in 2006. Fifteen locations across the country got the initial grants, and Knoxville was one of this first group, and the first in Tennessee. In some respects, it resembles some of the recent calls for connecting police services to social service support. They currently receive VOCA (Victims of Crime Act) funding through a state pass-through program from the federal government. They also get some funds from the city and the county donates use of the building. They also receive grants.

Visitors are met by “Tony,” a KPD officer who gets the name of the victim and the alleged victimizer. The latter is solicited in case they show up at the center. They are referred to a navigator who helps them understand potential services and connect them to the appropriate source. Recognizing they have little control in their lives, they are given control over what kind of help they desire. Once they are connected, then, to an advocate, they get more of the story of what brought them to the center and connect them with the help they need.

The client load and situation has been a different during the pandemic. The doors were closed in March, with all contact remote until early this year. The clients might come to the door and sit in their car and call advocates who were working from home. Paperwork would be taken to their cars to sign papers. It was difficult.

A typical year will see 1,500 people walk through the doors needing help. After re-opening mid-month in February, they had seventy-five people come in for help in the final two weeks of the month. March brought another 160, with about 150 coming in April, so the center was immediately back to its previous load. “I think this past Monday, we had fourteen come in.” She says Mondays are often busier due to events unfolding over the weekend.

She wants people to understand that meeting victim’s needs comes first. Action by law enforcement, if needed, comes later. They are working on partnerships with faith leaders which would allow the leader to call to request a worker come to the client at their church or other spiritual center.

With everything going on in the pandemic, the agency decided not to pull together a fund-raising event to celebrate their fifteen years. Through the month of May, they are asking that people donate $15 to commemorate their fifteen years. “We feel like everyone has given so much emotionally, mentally, physically, financially, for the last year-and-a-half. Fifteen dollars from people throughout the community can have just as much of an impact as a single large donation.”

She wants the larger community to take ownership of the center and its work. “Domestic violence is something that literally does not discriminate. It is across gender, across race, across religion, across economic situation. No matter which neighborhood you live in in Knox County, someone near you is a victim. Whether you know it or not, there is someone in your life who is a victim.”