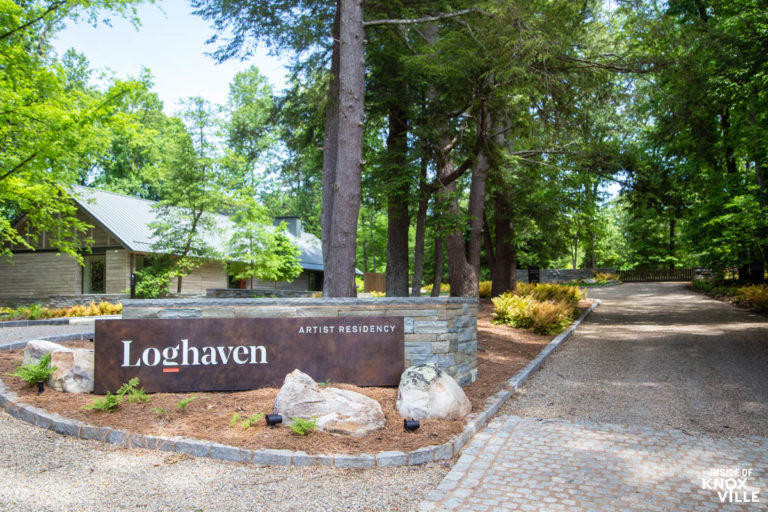 I’d heard mention of Loghaven in the last few years but didn’t really understand its history or its current purpose. I had no idea that it was so close to downtown, situated just about a three-minute drive from the Henley Bridge. I recently learned that Sanders Pace Architecture won a rare national award for their work there and I wanted to learn more.

Sarah Swinford, Loghaven Director, was kind enough to walk me around the property, show me the work that has been done, and tell me a bit about the history of the site. The history provided here was provided by her and an excellent paneled display on the property. I also spoke with Andrea Bailey, Executive Director of the Aslan Foundation, and with Brandon Pace, of Sanders Pace Architecture regarding their role in the project.

The modern history of the property dates to the early 1900s. Myssie Thompson, who had followed her husband about the company as he followed railroad jobs, followed him to Knoxville. In 1919, living on the Loghaven property, she determined to stay in Knoxville while he moved on. After temporarily losing the property, she regained it and added to it over the coming decades.

By all accounts, a very modern woman, she lived in the woods, while also circulating among Knoxville’s elite society. She began to build cabins on the property in the rustic style that became a popular reactionary movement during the Victorian era, with plans to rent them out for income. Her neighbor, John Hightower, also began work on a cabin in 1931 and it now is also part of Loghaven.

For forty years, Myssie Thompson owned and operated the community, serving as landlord to TVA workers building the Norris Dam and Alfred Clauss, a TVA architect who would build the nearby “Little Switzerland” neighborhood. Lowell Blanchard, host of the influential Mid-Day Merry-Go-Round and Knoxville News Sentinel Columnist Bert Vincent, who wrote the popular “Strolling,” column also lived there.

By the 1960s many residents were UT professors and their families. By the 1970s, it became a popular spot for students to live and getting a lease was described as extremely competitive. When Myssie died in 1975, at age eighty-nine, the property passed to her sons who sold it. In 1978, a recent UT gradate named Chris Whittle, along with partners, purchased the property as a community for himself and his employees. From there they launched a publishing empire that included Whittle Communications and would boast 600 employees by 1986.

By 2005, the property, including what is now High Ground Park, the site of Fort Higley during the Civil War, was owned by a developer who intended to build condominiums there. The community, conservation groups and Civil War preservationists opposed the move. City council tabled the developer’s rezoning request, and Loghaven continued in a sort of limbo.

When Jim and Lindsay McDonough attended a party in Myssie Thompson’s old cabin and learned the property was endangered, they took word to the Aslan Foundation on whose board they sat. In 2008, the foundation purchased 100 acres which included Cherokee Cove, Fort Higley, and Loghaven. They “recognized the area’s historic and aesthetic value and viewed the property as essential to Knoxville’s cultural heritage.”

After considerable thought and recognizing the history of the site as a spot that attracted “unconventional, creative people,” The Aslan Foundation established the Loghaven Artist Residency and determined the cabins would be used to support artists and creative works of all types. Sanders Pace Architects were brought in and together they rehabilitated five cabins, stabilizing, and improving them structurally and updating kitchens, bathrooms and adding air conditioning and heat. They also designed and built four new buildings, including the Gateway Building, a residence for a caretaker, a Performing Arts Studio, and a Visual Arts Studio. A sixth cabin will be rehabilitated in the future.

Andrea Bailey, Executive Director of the Aslan Foundation, pointed to the serendipitous way the foundation became aware of the property and said it was all close to being lost. She said the foundation took four-and-one-half years to consider the best and highest use for the property and felt having artists on site honored its past.

She said Sanders Pace was chosen as architects because of how they work. She praised their collaborative and innovative approach to their work. “They made an amazing campus, with the cabins, new structures and the protection of the environment.

Three weeks ago, the American Institute of Architects presented the 2021 AIA Architecture Award to Sanders Pace Architecture for their work on the project. It is the architecture professions highest national recognition and it “celebrates the best contemporary architecture regardless of budget, size, style, or type.”

Their work was recognized for its “exceptional design for a ninety-acre campus to foster artistic exploration and the creation of new work.
The design for the Loghaven campus combines new construction and innovation with careful rehabilitation of the historic log cabins on the grounds—creating a seamless dialogue between the new and historic architecture and the natural landscape and advancing the residency’s dynamism as a center for contemporary artistic practice.”

The architectural firm worked with Aslan over a period of six years of planning and design. In the press release, Brandon Pace said, “We have close relationships with all our clients, and it was particularly inspiring and rewarding to work with the Aslan Foundation. The project brings together elements that are central to our practice—respect for the unique nature and history of each site, design that grows out of the special character of the place, and the creation of spaces that serve and support users. The Institute Honor Award follows our colleague Michael A. Davis, AIA—who was instrumental in the Loghaven project—being recognized with a 2021 AIA Young Architects Award.”

I spoke with Brandon who said the group had never submitted for a national award before and that he thinks the jury was drawn to the history and beauty of the property and the connection to the community. He said they had their first meeting on the project in 2014 and “while we enjoy modern work, we really enjoy meeting the project in its place.” He said the project originally simply called for making the cabins “safe and comfortable.”

It turned into a major rehabilitation project as entire foundations had to be constructed for the cabins. For the new structures, he said they designed them to be distinct, but “in communication with” the older structures. They utilized rainscreen for energy conservation and cut blue stone foundations. The Visual and Performing Arts buildings use different but complementary materials.

Of the award, he said it is an honor to be placed among the architects that they admire who have won in past years. He said it is the “highest level of award a building can get in this country.” He pointed out that Aslan brought in great consultants in the fields of sustainability, lighting, acoustics, and landscaping.

On June 1, 2021, Loghaven will launch its inaugural open call for applications, accepting submissions from emerging and established artists across the U.S. who are 21 or older. The chief criteria for selection are artistic excellence and creative potential. For more information, visit
loghaven.org/residencies/apply.