Development Comes to the 300 Block of West Magnolia 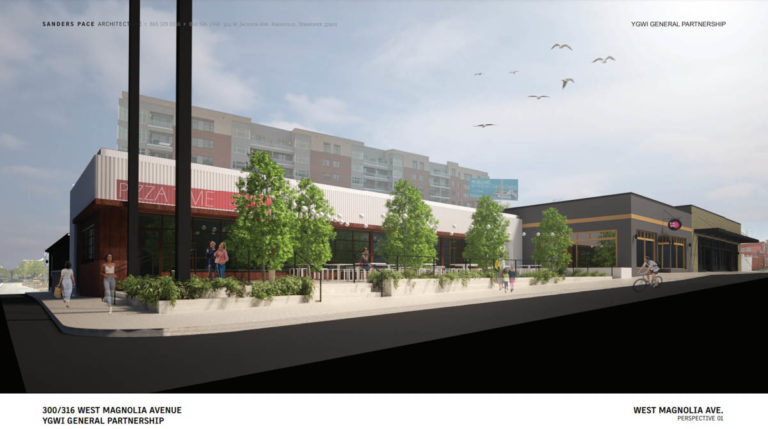 A duo of former Olympians, former gymnastic teammates and both named John, have stepped up to the challenge of developing 300 to 316 West Magnolia. The two have lived in the area for about twenty years and have undertaken smaller downtown residential development projects. They are excited to have the opportunity and have high hopes for the set of intertwined buildings.

John Macready is from Santa Monica California and is the grandson of Broadway, film, and television actor George Macready. He was the youngest member of the 1996 U.S. Olympic gymnastics team and two-time World Championship Team member in 1995 and 1997. After his gymnastics career, he worked investing residential and business real estate.

He first came to Knoxville for a small gymnastics camp. He came for a week, but in that short time, “met a girl. She was going to the University of Tennessee. I said, ‘I’m going to marry her.’ Went back, packed my U-Haul, and moved to Knoxville.” She graduated and they moved together to California. They were told they would be back, and he said, “never.” Three years later, wanting to raise a family somewhere other than California, they returned. The couple now has four children.

He and John Roethlisberger started the Flip Fest gymnastics camp, first in Knoxville, and then permanently in Crossville. The camp includes 150 acres and can sleep 350 people at a time. It also serves as a retreat facility, Lake Francis Retreats. It had been growing while he lived in California, so when he moved, he called John and suggested they both move to Knoxville.

When he moved to Knoxville, he lived in Park Place Condominiums in east Knoxville, one of the first school-to-residential developments in the city. “The camp has been our heart and soul, but we get the itch to do other things we are passionate about.” They began purchasing residential real estate, rehabbing for the purpose of rental properties.

Macready said for years the duo has talked of expanding more into real estate and have talked about owning a building in downtown Knoxville, saying they love old buildings and architecture. He said there probably is not a major downtown in the country they haven’t been to and they always talk about possibilities for development that they see when they travel.

A him about the buildings on Magnolia and he and Roethlisberger agreed to give it a try on a larger scale. Roethlisberger said, “We’re excited. We’ve got a long way to go and it’s still a work in progress.”

They purchased the buildings from Dewhirst Properties, and they said they’ve been very helpful and supportive. Roethlisberger says it reminds him of a coach giving help to a young gymnast, as Mark Heinz and David Dewhirst have so much experience in local development. “We’re trying to learn and grow and do this right.”

The unit at the western end of the building includes just over 10,000 square feet, “that we hope to be a grocery store.” He noted the increasing residential density of the area and said they feel a grocery store is needed. As an interesting historic note, they understand that a grocery store is precisely what was initially located there, operated primarily for employees of the railroad in the first half of the last century.

There are two units in the middle of the buildings, each coming in at over 3,000 square feet. The two see these spaces as very flexible, imagining small restaurants, retail or even office space. The entry to the rear, center space would be from the alleyway behind the building.

The section which was formerly devoted to Free Service Tire will have its bay doors replaced with glass and the space will be marketed as a restaurant. The two are installing a grease trap and building out a kitchen on the western side of this section. They are imagining a large outdoor eating space in front of the eastern end of the building.

To the rear of the building are two quite unique spaces. Fist, a large, 7576 square foot space. The site was once the “Rayl School,” a vocational school serving public schools. The current building, built in 1934, replaced that building. This section, along with the former and proposed grocery store on the other end of the building, is the oldest section, as pieces have been added through the years. It features extremely high ceilings and exposed steel trusses and will be lined on both its entire western and southern side with large windows, flooding the space with light.

There is a sliver of space to the rear of the proposed grocery store on the western end of the building which has a sort of speak-easy feel and they could see it as a micro-bar if someone had the right vision for it. Access is off the wide alley that runs behind the building.

J & S Construction out of Cookeville began the site work in early April, with completion targeted for September. Internal construction will mostly be completed to the specifications of the future tenants. Sanders Pace Architecture is providing architectural services.

The two are optimistic about the section of town which now has the Regas Condo development and its coming food hall directly behind their building. Vienna Coffee and Public House are nearby. Mews I and II are filled with residents and just down the street. Tako Taco and Mill and Mine are one block away. They say they agree with David Dewhirst and Mark Heinz that this will, over the next several years, become a downtown hub, perhaps becoming a spot where locals congregate as visitors take over other parts of town.

Any potential tenants are asked to contact George Brown of SVN Wood Properties at 865-637-7777.