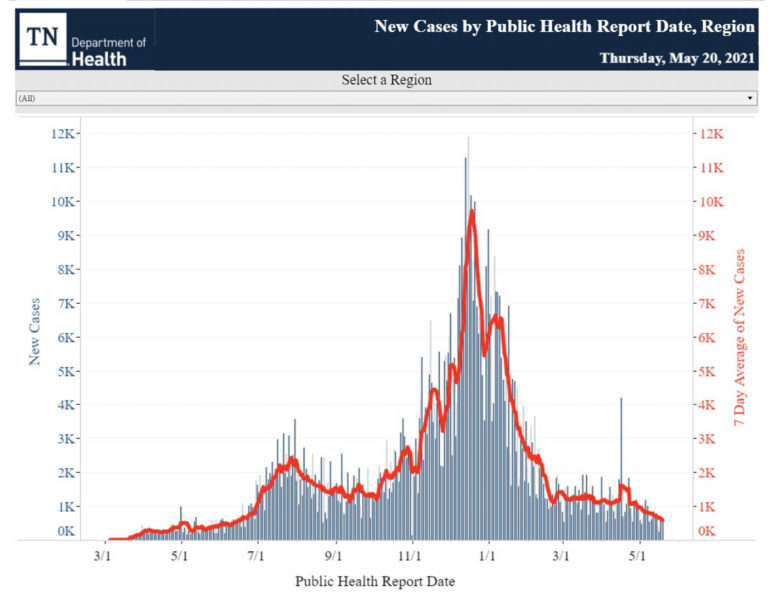 As we approach the end of my COVID-19 reporting, there is much reason to hope the worst of the pandemic is over for the United States, in Tennessee, and in Knoxville. There are ways that statement could be proven false in the coming months, either through new variants, low vaccination rates in particular areas, or both, but this is an optimistic moment. While we now appear unlikely to reach herd immunity via vaccination, the vaccine is clearly driving down cases, hospitalizations and deaths.

For the moment, while the news is also encouraging at an international level, with a current sharp downtown like several we have seen before, the picture over the next six months or year is murkier. Many countries have had little-to-no vaccination efforts and are at the mercy of a virus they can only control through measures many of them cannot afford to take. The longer the virus circulates, the more likely variants are to emerge. We can hope they will be a weakened version of their predecessors, but that is not assured.

165.9 million cases of COVID-19 have been confirmed across the world since the beginning of the pandemic. Of these, 146.6 million people have recovered, while over 3.4 million people have died. About 4.4 million additional cases were reported in the last week, a drop of 15% from the previous week. An average of 624.3 thousand new cases were reported each day over the last week, down from 734.1 thousand the week before.

Of these countries, Argentina may be the next major concern. Each of the countries on the list recorded a decline in new cases for the week except for Brazil (+8%) and Argentina, which recorded an alarming 40% increase on already high totals. India, which continues to report far more cases than any other country, nonetheless, saw a 24% decrease in cases from the previous week.

In pandemic totals, the five countries reporting the most cases in the world are the U.S. (33.8 million), India (26 million), Brazil (15.9 million), France (5.6 million), and Turkey (5.2 million). The per capita story is quite different for some of these countries. Among all countries (including those with extremely small populations) in per capita comparisons: the U.S. (#10), France (#22), Brazil (#37), Turkey (#57), and India (#106). At the top of the per capita list are countries many of us would struggle to identify on a world map: Andorra, Montenegro, Czechia, San Marino, and Gibraltar.

I checked in on Sweden, which is a long-faded topic of conversation from early in the pandemic, due to their perceived laissez-faire approach to the virus. They currently rank as having the ninth highest per capita case rate in the world (4th among populous countries). Their death rate ranks 33rd in the world (28th among populous countries). Compared to populous European countries, they have the 3rd highest case rate per capita and the 19th highest death rate out of 35 countries.

About 1.56 billion doses of the various vaccines have been administered internationally, an increase of about 190 million in the last week. The New York Times reports the following shot rates per 100 people for each of the continents: North America (56, but for the U.S. it is 84), Europe (36), South America (23), Asia (17), Oceana (9.2), and Africa (1.9). Seychelles leads the world in percentage of its population fully vaccinated (63%), while the U.S. remains fifth at 38%. China continues to lead the world in total vaccines given at 449.5 million, while the U.S. is second with 277.3 million.

The United States has reported over 33.8 million cases of COVID-19, including 201.1 thousand in the last seven days, a drop of 21% from the previous week, coincidentally, the second consecutive week to see a 21% decline. Almost 27.4 million people are considered recovered, while over 602,632 have died. Almost 5.9 million Americans currently test positive for the virus.

The U.S. has averaged 28,735 new cases per day over the last week, about 7,900 fewer new cases per day than a week ago. The daily average for new cases is the lowest it has been in the U.S. since June 20 (27,556). The average number of cases each day has steadily declined since April 14.

The death rate in the U.S. from COVID-19 also continues to decline, though more slowly, with a drop of 10% this week over the previous week. The U.S. is averaging 573 deaths per day from COVID-19, down from 625 a week ago. This is the lowest average daily death rate recorded since July 7 (565).

Over the last fourteen days, only three states, Wyoming (30%), Idaho (6%), and Arkansas (1%) are reporting increases in rates of infection. Each of these states are also well below average for vaccination rates, with Wyoming and Idaho tied for 42nd, and Arkansas tied for 45th (with Tennessee and others). New Jersey has shown the biggest drop over the last fourteen days with a 61% drop in cases. It has the sixth highest vaccination rate.

Yesterday, only one state (Florida) reported more than 2,000 new cases and nine reported 1,000 or more, down from five and thirteen, respectively, a week ago. The top states in per capita cases and deaths are not changing much as the new numbers drop rapidly. The top five states in per capita cases (pandemic totals) are North Dakota, Rhode Island, South Dakota, Iowa, and Utah. Tennessee dropped to sixth. The five states which have led in per capita deaths remained the same: New Jersey, New York, Massachusetts, Rhode Island, and Mississippi. Tennessee remains 21st in per capita deaths.

Vermont holds the top spot for first vaccinations given (66%), with Hawaii, Massachusetts, New Hampshire, and Connecticut rounding out the top five. Maine continues to lead in those fully vaccinated (51%), with the top five rounded out by Connecticut, Vermont, Rhode Island, and Massachusetts. Tennessee moved from a tie for 45th to a tie for 43rd, (with Georgia and Idaho) in first shots (38%), with Idaho, Wyoming, Louisiana, Alabama, and Mississippi ranking worst. Tennessee is tied with Louisiana, Georgia and Arkansas for 45th in those fully vaccinated (30%), trailed only by Mississippi and Alabama.

Yesterday, the state of Tennessee reported 420 new cases of COVID-19, bringing state totals to 708,549 confirmed cases and 151,152 probable cases. Over the last seven days the state has averaged 516 new cases, down from 712 earlier. This represents the lowest seven-day average reported for the state since June 13 (509).

Over the last fourteen days, the state has recorded a 35% decline in new cases, close to the U.S. average of -36% over the same period. 840,593 Tennesseans are considered recovered from the virus, while 6,744 state residents currently test positive for the virus. The current number of active cases is the lowest in the state since March 2, 2021 (6,403).

Hospitalization rates are dropping quickly, with 574 COVID-positive Tennesseans currently hospitalized. 206 of these are in ICUs and 97 are on ventilators. A week ago those numbers were 718, 258, and 121 respectively. Fifteen additional people were hospitalized yesterday, bringing the pandemic total to 27,716.

The state reported 11 deaths yesterday, bringing the pandemic total to 12,364. Over the last week, the state has reported 59 deaths from the virus, one fewer than the previous week. The state is averaging 8 deaths per day, similar to June 2020.

Testing in the state continues to decline, with an average of about 10.3 thousand tests per day last week, compared to about 10.9 thousand per day the previous week. The state reported 13,909 tests yesterday, bringing the pandemic total to almost 7.9 million. Also reported was an excellent 3.67% positive test rate, indicating perhaps the lower level of testing is adequate, nonetheless. Johns Hopkins University is reporting a 4.6% positive average over the last seven days.

The Knox County Health Department reported 10 additional cases of COVID-19 today, bringing county totals to 43,426 confirmed cases and 8,720 probable cases. The county averaged 13 cases per day over the last seven days, down from 13 the week before. Case levels are currently similar to last June. 51,216 cases are considered inactive, while 292 Knox County residents currently test positive for the virus, a decline of 160 from one week earlier.

Hospitalizations of Knox County residents bucked national and state trends to spike this week, rising from 14 a week ago to 26 on Monday. The number has dropped slightly since and is currently 23. 1,413 COVID-positive county residents have been hospitalized at some point during the pandemic.

Two deaths from COVID-19 were reported this week, bringing the county total to 638. There have been one or two deaths for each of the last three consecutive weeks. The deaths continue to come among those in a younger bracket, with one person who died this week falling between 18-44 years old and the other between 45-64.

The state is reporting an excellent 3.4% positive test rate for Knox County, down from 5.4% a week ago.

The COVID-19 metrics for the county were updated, with cases remaining green as they continue to drop. Testing remained yellow, as the volume of testing continues to decline. Health capacity remained yellow as vaccination rates declined. Hospital capacity and deaths remained green.

I’ve been including a link to the New York Times page for Knox County for several weeks, as it gives their detailed analysis of where each county in the U.S. stands. Their standards for each category are very strict. They continue to reflect the current risk level in the county as high.