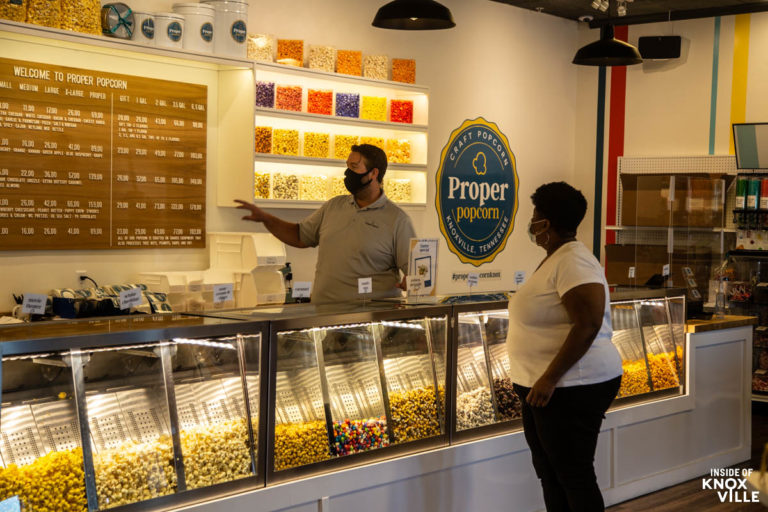 About eight months after Knoxville Chocolate Company closed its 29 Market Square location, a new business is working toward opening at the spot. Proper Popcorn, which has a shop on Kingston Pike (pictured in this article) in Franklin Square, has announced this will be their second location. The company is co-owned by three brothers and I spoke with Adam Johnson, the brother who is most hands-on operating the business.

Popcorn has always been a family favorite food for many years. Growing up I have memories of my parents popping popcorn after all of us kids went to bed. The fresh popcorn smell permeating the house while we try to sleep. As we grew older we would order gourmet popcorn for family gatherings throughout the year. Starting a popcorn shop seemed like a natural thing to do.

His brothers have lived in Knoxville for over a decade, while Adam lived in Nashville. About two-to-three years ago, the three started talking about opening a gourmet popcorn shop and, after about two years of preparation, Adam moved to Knoxville and the three opened the first shop. It was November 2019 and it seemed like the perfect time to start the business. That is, for about three months.

Adam laughed about their timing and pointed out a couple of silver linings. He said the fact that they had just opened meant they had few expectations. Business may have been bad after the pandemic, but they didn’t have a comparison point. They worked their way through and made do on a combination of in-store and on-line sales.

He also pointed out that the location about which they are so excited would not likely have been available without the pandemic, so it all worked out. He said they never lost faith both that people will want their popcorn and that Knoxville will rebound better than ever. He pointed out that football will not be allowed to go missing for long and they expect crowds in downtown stores this fall.

The business offers fifty different flavors of popcorn and sells bags that range from snack size, to the “proper,” which serves somewhere in the neighborhood of 20 people. They also sell tins of popcorn which may include from one to three different flavors. The west shop sells a large selection of chocolates, candies, gifts and games.

The downtown store will be smaller and will, as a result, focus more on the popcorn. It will not have as much of the vintage candy, but will have the vintage bottled drinks and a smaller collection of gift items. He said they will also have Knoxville-related items. As is the case at the west store, all popcorn will be made at the location. He said they have a fully functional kitchen at the location that will serve up downtown’s popcorn.

He said they had planned to grow from the beginning and downtown seemed like a logical next step. He added, “We are excited to be growing and opening a second location downtown at Market Square.” The group hopes to be open in late May or early June. You can follow them on Facebook and Instagram, and be sure to check out their webpage.