Knoxville Adventure Collective Invites You to Explore the Outdoors 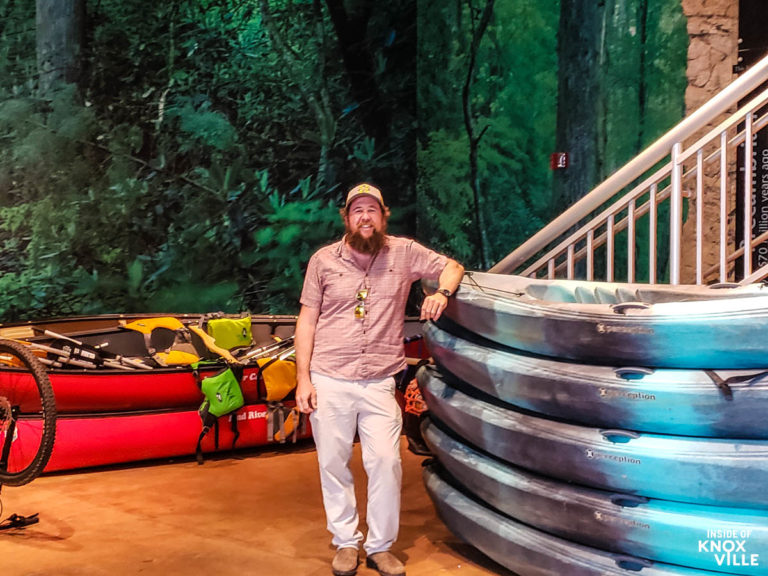 It was almost six years ago that I introduced you to a business offering biking, paddle boarding, kayaking and more right out of downtown. Just about the time the pandemic was gaining steam, in early 2020, Jon Terry bought the former Billy Lush and shaped it more to his own vision as Knoxville Adventure Collective at 900 Volunteer Landing Lane. The new business offers many of same services, but with significant changes.

Jon is from North Carolina, where he got a degree from Appalachian State University in Recreation Management. At 19 years old, he started work for the Nantahala Outdoor Center and continued outdoor work with SOAR in Balsam, North Carolina, planning outdoor adventures mostly for school groups from across the county. He coordinated much of the non-profit’s national program, with camps across the country, planning classes working out the logistics and leading biking, climbing and river excursions. They also led excursions to Costa Rica and Peru.

He moved to Knoxville in 2018 and lived initially in the Island Home area. He noticed the light amount of river traffic near downtown. He first worked full time for Blackberry Farm leading their hiking, paddling and biking program, but he also visited Billy Lush and saw a great potential in the business. He purchased the business in early 2020 and set a grand opening for April 2020. Everything locked down.

When he was able to reopen in May people were very reticent about group activities, so he planned and sponsored a solo adventure race, Sola de Mayo, which provided for solo timed runs, and bike and canoe courses which were self timed. Turnout was great and people were able to safely enjoy outdoor activities.

The popular sunset and moonlight paddle events continued as it was outdoors and spaced. By summer people were more comfortable with a larger number of activities and he resumed his shuttles to allow canoe floats from the Holston River Park back to Volunteer Landing. He bought new Mad River canoes and Perception kayaks, as well as Kona mountain and greenway bikes. He purchased a number of new paddle boards.

Those and other touches were important to him because he want customers to have a quality experience. He said he gets a lot of beginners and he wants them to enjoy their first outings so they will continue to experience the outdoors in different ways. He gets a good many tourists, but he feels many area residents don’t realize the business is there and just how easy it is to get out on the river and enjoy it.

The kayaks, canoes, bikes and paddle boards can be used directly out of the shop on the river and may be rented for an hour or two or all day. They may also be transported elsewhere for use. Customers can go out on their own or arrange for instruction or tours. He coordinates with Knoxville Outdoor Tours for people who want to have guided trail rides.

The shop has a few related items for sale. Jon says, “I try to have a little of everything you need.” The shop also has five taps for beer, which Jon keeps stocked with local or regional craft beers. He’s shifted from the island theme employed at Billy Lush and has a more regional/river theme. The space is available to have a catered event after an outing.

He’d like to see more small corporate groups using the facilities for team building outings which can be easy and fun. He has a new website where you can reach out to him to plan an event or a personal outing. Jon says he senses that people are ready to get out from behind their doors and experience the world again.

Of his place in his adopted city, he says, “If there isn’t a great fit for you locally, you have to create it.” He seems to have done just that.