Knoxville Outdoor Tours Offers A Pro’s View of the Trails 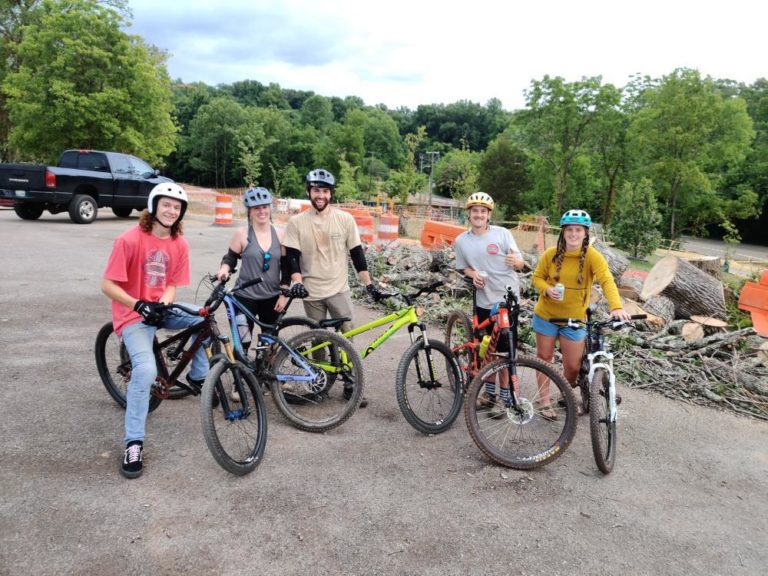 It may be Alex Clark’s roots in east Tennessee that make him so enthusiastic when he talks about riding the trails and his new business, Knoxville Outdoor Tours. His mother is from east Tennessee and his dad moved here to play sports for Tennessee Wesleyan. Once the two met, they married and raised Alex in Athens, where, importantly his mother is an entrepreneur, a bug she would pass on to Alex.

Alex attended U.T., getting a Supply Chain degree and got a great job out of college using his new degree. But he kept an idea book, just to jot down thoughts he might want to pursue at some point. In the meantime, he also became an avid mountain bike rider, riding in competitions across the U.S. and Canada and he says he always enjoyed sharing that with others. The idea book and the riding would eventually merge.

Alex inevitably became involved with the Appalachian Mountain Bike Club and has worked on a number of the trails in the Urban Wilderness. As a resident of south Knoxville, it’s a quick jump to hop onto his bike and hit a trail, and he says it’s something he does daily. But he jotted down a note in his idea book about something that was missing. “A staple of riding destinations is having guided tours. Knoxville is getting on the map for the outdoor scene in general and riding in particular” and that makes him proud of his city.

After months of exploring the various business models of other guided bike tours around the country, he thinks he’s hit on the right combination at the right time. While it is a struggle starting a destination business when travel is down, he said it’s a perfect option because on a bike you are necessarily moving fast and social distancing isn’t an issue. And who isn’t ready to bust out of their home at this point?

Since he started offering his guided tours of the various Urban Wilderness Trails through south Knoxville earlier this year, he’s already hosted clients from Tampa, Florida and from Indiana. He’s also shooting a promotional video with local filmmaker Devon Fails with Devon Fails Video Photo, which he hopes to use to promote not only the business, but Knoxville’s trails and craft brew scene.

He said it’s easy to stay in downtown hotel and enjoy the city, but slip out to take a ride on the south Knoxville trails and finish it off with a beer or meal at any of the growing number of restaurants and tap houses along Sevier Avenue. With the structure of the trails, there are easily accessible starting points that can make for very different kinds of rides.

He works with the clients before the ride to tailor the experience to their needs and interests. He said some are hard core and want to go all out for several hours, while others prefer reaching a summit pretty quickly and coasting downhill for most of their ride. So far, he said, most of the demand has been from intermediate level riders who want to enjoy the trails without having to worry about finding their way around.

He’s also formed partnerships with Tennessee Valley Bikes and River Sports Outfitters, which allows him to provide excellent bikes for customers if they don’t have or don’t want to bring their own. He makes sure the bikes are fitted to the riders and has them waiting, along with snacks and water for the ride, when the customers meet him at the trail head.

The goal is for people to enjoy the trails and then explore their river, Sevier Avenue, and downtown. I hope I can continue to be a good ambassador for Knoxville and the trails. I can share my knowledge to maximize their time. I very much appreciate all the work that has been done to make this possible. If I can show people how to enjoy the trails in a sustainable way, it is good for everyone.

You can check out the company and make reservations at the Knoxville Outdoor Tours website, and follow them on Instagram and Facebook. For the summer they are hosting free group rides throughout the Urban Wilderness (check Facebook for details). Additionally, they are offering 20% off for Knox County residents that would like to book a guided tour. “There are many miles of trails and many times even local riders may not have ridden them all – we offer intimate knowledge and history of all the trails.”