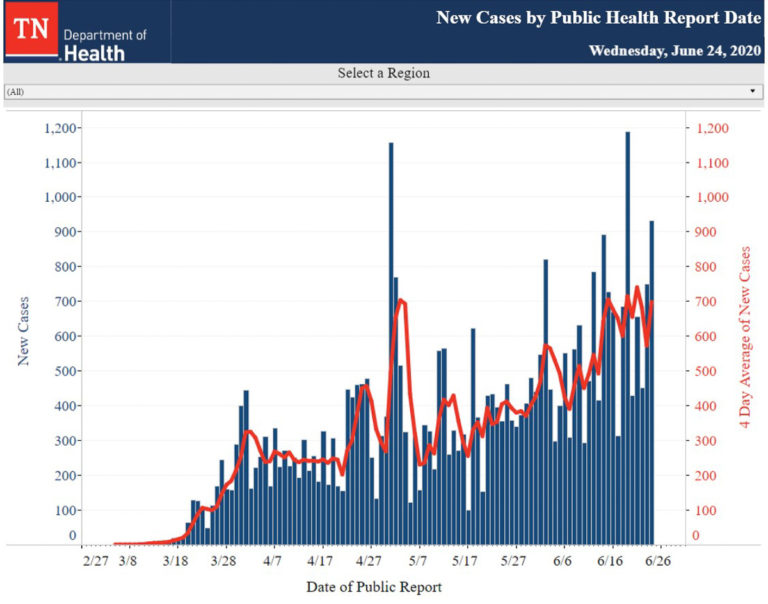 This comes to you on a day when the virus has become more personal to me. Until now I have only known the virus indirectly: A father of a friend died, but he lived in New York. I had started hearing friends knew people who had it. But now, a good friend has acknowledged a positive test. Please, my friends and readers, be careful.

The total number of worldwide cases since the beginning of the pandemic sits at 9,578,704 as of this writing. 486,123 deaths have been acknowledged and attributed to the disease. Yesterday, 172,383 new cases were confirmed, as were 5,071 deaths across the world. The number of cases added yesterday is the second biggest single day number since the beginning of the pandemic. All of the worst four single days have happened in the last week.

The average number of daily worldwide deaths is showing a slight sign of plateauing after rising for the last four weeks. The current seven-day moving average is 4,627, far better than the previous peak. It remains to be seen whether this momentary plateau can be held in the face of rapidly increasing world-wide cases.

As was the case yesterday, the three countries most contributing to the high numbers are Brazil (40,995), the U.S. (38,386) and India (16,870). On one hand, the world-wide increases might be said to be driven by expanded testing, but consider that India is reporting those daily numbers and they have performed about 1/18th of the number of tests the U.S. has performed on a per capita basis. Their number is necessarily much, much bigger.

There were 21 different countries reporting at least 1,000 new cases, yesterday. Of those, 14 reported 2,000 or more. While the numbers are going up in many places, the concentrations continue to be in the Americas, the Middle East and Southeast Asia. Half of the ten countries with the highest numbers yesterday are Latin American countries.

One notable continent missing from the highest totals is Europe. Other than Sweden (which reported 1,610 new cases yesterday), at #16, no other European countries currently report over 1,000 new infections for the day yesterday. The closest is the UK, which was slower to respond to and control the epidemic than other countries, and  it reported 652 cases yesterday, to rank 29th. The U.S. has thus far done worse in case comparisons since the epidemic was firmly established, but better in terms of death rates.

We have essentially negated any progress we made in the reduction of cases in month of April. Did we reopen too early? Did we not reopen carefully enough? Europe has, so far, reopened without the dramatic increase in cases we’ve seen, although they are seeing a new increase at this time. It is important for us to determine, as Americans, what has gone so dramatically wrong in this country as we dwarf other countries in cases and deaths and now seem to be handling what should have been the aftermath more poorly than other countries.

Deaths, however, continue to see improvement, though we continue to lose, on average, about 620 people per day. There are likely several simultaneous explanations. We are, no doubt, identifying more mild cases than before, which only explains how the death rate could go in opposite directions from the case rate. It is possible hospitals are better trained on timing of the use of ventilators and the use of steroids and remdesivir. Many believe that the surge in cases among the young means fewer deaths per case because they are less likely to die.

I hope we are trying desperately to determine the reasons because it is also possible the death rate could climb rapidly after a delay from the date the cases began increasing once more, or that the next group to be diagnosed in big numbers will be the older and more ill people who are infected by the current group of young infected people.

We do know that mortality rates increase when hospitals are overrun. The quality of care necessarily is diminished and decisions have to be made regarding who gets treatment. It happened in Italy and New York City and it is happening now in Arizona and is likely soon in Florida, Texas and California, all of which are setting records at very high levels, with numbers of cases.

Testing is also a concern, despite what we’ve been told officially for months. Demand is now overwhelming supply and lab capability in Arizona and we have no national coordination to get them the help they need from less-hit areas.

Put another way, there were 20,846 new cases in the southeastern United States yesterday. This total is larger than the number of new cases in any other country in the world yesterday, with the exception of Brazil and, of course, the U.S.

Texas, as of a few minutes ago, has announced it is pausing its reopening and working to free up additional hospital beds. Eighteen states are now requiring masks to one degree or another. North Carolina is one of the latest and is, so far, the only southern state requiring masks.

The state of Tennessee yesterday reported 932 new cases of COVID-19. Also reported were 625 recoveries and 14 deaths. Consequently, the number of active cases grew by about 300 to a total of 11,986. A total of 37,235 cases in the state have been confirmed since the beginning of the pandemic and 556 deaths have resulted from the disease.

In addition to landing the state in the top ten of most new cases, once again, as noted above, the 932 new cases yesterday is the third worst day for new cases since the beginning of the pandemic. The worst day was last Friday. The total new cases for the week sits at 2,789 after just four reporting days.

50 additional people were hospitalized across the state yesterday and the state reported administering almost 13,000 tests for a total of about 718,000. Regarding those tests, as you can see from the testing chart, we now sit at a 6.9% positive test rate. The goal is for it to be below 5%. It is the highest it has been since mid-April. This reflects increasing community transmission and a testing program that isn’t finding everyone.

The Knox County Health Department is reporting 39 new cases of COVID-19 today. This breaks Tuesday’s single-day record of 36 new cases and Monday’s record of 24. The three record-setting days in one week have helped drive our weekly total to 132, with two days remaining. That is already 42% higher than the previous weekly record of 93 set just two weeks ago.

Knox County has now reported 773 total cases since the beginning of the pandemic and the increased pace of positive cases has pushed the number of active cases to 172. There are currently 9 COVID-positive Knox County residents in the hospital. Hospital statistics are only updated on Friday’s, so there is no way, other than weekly to measure any impact there. There have been no additional deaths and the number of probable cases currently sits at 25.