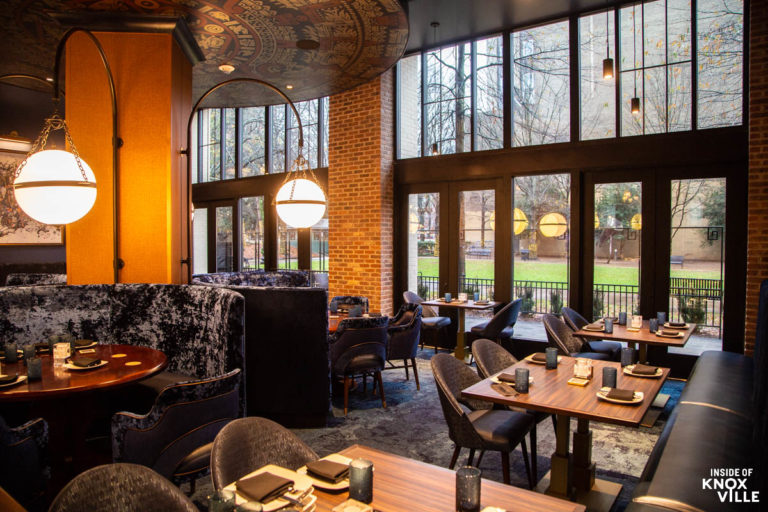 Vida, the most recent restaurant by Lori and Jim Klonaris offers an oasis of elegance on the bottom floor of the historic Holston Building at 531 South Gay Street. The space, which has been vacant for years through some failed attempts at redevelopment, was originally the lobby for Holston Bank which opened there in 1913 and occupied the entire building. The Klonaris family purchased the property a year ago for $2.4 million after wanting to develop it for some time.

The restaurant features outdoor seating on Krutch Park for up to 45 patrons. A hand painted sign, designed by Robin Easter and painted by Meghan Lingerfelt has been added to that side of the building and gas lanterns, iron fencing and a massive marble slab bench for waiting makes the space particularly appealing.

Just inside the door, the first of many works of art is on display and features a 500 pound marble sculpture titled “Princess Vida.” The striking work took Bill Cook, Jr., area sculptor, 275 hours over five months to create. He also made the copper feather headdress and clothing. The necklace features a re-purposed piece of the original railing from Holston Bank.

Mark Carson English painted a series of five panels for the restaurant which illustrate and add to the theme of life. Small touches, such as a beautiful  Brazilian-made skull add to the theme of life and death. A beautiful mosaic adorns the ceiling and a stunning chandelier dangles over the stairwell. As much of the art deco railing as could be preserved in place remains, and the lone piece that had to be removed was integrated into the welcome desk at the entrance.

Johnson Architecture designed the restaurant and S.K. Ballard Contract Interiors selected and coordinated the finishes, but the vision was Lori and Jim’s. The lighting is soft and purposeful and the furniture posh. There are no televisions and the atmosphere is intended, much like Kefi, to encourage conversation between friends. Ample marble is found throughout and broken pieces were replaced by Tennessee Marble Company in Louisville, which supplied the original stone a hundred years ago.

As with Kefi, Vida will feature small plates intended for sharing at the table, as well as a sophisticated cocktail program. Executive Chef Jon Galatin, formerly of the Oliver Royale, will work from a state-of-the-art kitchen which features a unique scrubbing system allowing all exhaust emitted from the kitchen to be fresh air and completely free of smells or grease. The menu, which has been in development by Lori for the last six months, is pan-Latin, featuring dishes derived from seven different Latin American countries.

Wines are primarily sourced from Spain, Chile and Argentina and draft and bottled beer is available. Salsa and chips, pescado and two different guacamoles are offered for appetizers. The main menu includes soups and salads, small plates, tacos, seafood, larger dishes for the table and deserts.

In addition to developing Vida, the couple has also developed a cozy and elegant bar in the basement of the Holston. I’ll have more on The Vault later this week.