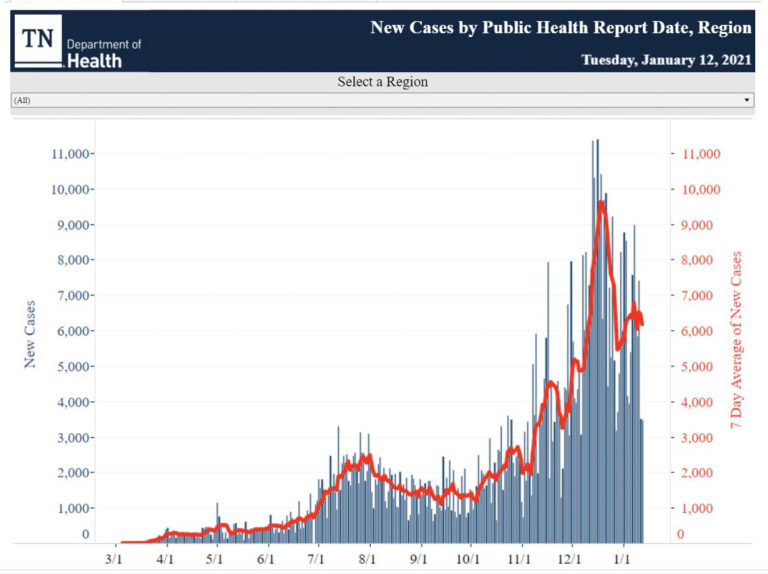 Welcome to the middle of the week. It’s hard to deny the political cloud hanging over the country in the wake of last week’s attack on the capitol, this week’s impeachment activity and the threats of violence for next week’s inauguration. We have carried a great deal of collective sadness and anger for a long time. Please remember to stop reading my COVID-19 articles periodically and to turn off the 24-7 news and social media as needed. We cannot survive on a constant diet of sadness and outrage.

The level of tests reported continues to drop and has now returned to holiday levels. I’m not clear what is fueling the drop in tests, beyond speculation that resources are being shifted to vaccinations, though that doesn’t seem to cover it for multiple reasons. I also wonder if people are realizing they have it, responding however they choose to respond, and simply not getting tested. I think many of the current probable cases are people who know that is what is going on, but just don’t see a reason to be tested.

The state reported 3,478 new cases yesterday, the third lowest total in the last six weeks. The new cases bring the state numbers to 569,671 confirmed and 91,203 probable cases. Of these, 579,345 are considered inactive and 73,518 Tennesseans currently have active cases of the virus. The seven-day average for new cases is 6,175 per day.

151 COVID-positive Tennesseans were admitted to the hospital yesterday, the highest I can remember for a single day. The total number of Tennesseans hospitalized with the virus since the beginning of the pandemic has reached 15,510. The net number in the hospital continues to decline very slowly and is now 3,050, eleven below the day before and almost 300 below the record set on January 1.

There are 741 COVID-positive Tennesseans in ICUs and 489 on ventilators. Each of these numbers are up from yesterday and the number on ventilators represents a record for the state. Hospital beds across the state are at 86% of capacity, while ICU beds are at 91% capacity.

Part of the reason for declines in the hospital census, unfortunately, is deaths. While 151 new patients entered the hospital yesterday, 146 died from the virus, bringing the total Tennessee deaths from COVID-19 to 8,011. The day was the second deadliest of the pandemic for the state and brings the daily average number of deaths to 107 per day.

The state reported just under 15,000 tests for the day, down about a third from the already-low total from yesterday. The state reported a 17.17% positive test rate, while Johns Hopkins University puts Tennessee’s seven-day average positive rate at 19.7% Both numbers reflect improvements in the percentage of positive tests.

Four additional deaths were reported today, bringing the pandemic total to 383 Knox County residents who have died of COVID-19. The four deaths reported today were spread over the age groups, with one person 45-64 years old, two people 65-74, and one 75 or older.

Benchmarks were updated, with more detail explanations to come tonight at the Board of Health meeting. Reduction or stability in cases is rated red, which surprises me a bit, given the low case numbers in recent days, so the explanation will be interesting. Testing, on the other hand is now rated yellow and that surprises me, given the low level of testing at the state level (and I assume locally). Public Health capacity is red, which makes sense given the Health Department announcement that that are unable to contact trace. Health Care capacity is rated red, as is death rate.

According to the state website, Knox County has averaged a 22% positive test rate over the last seven days. The state also reports that 3.02% of Knox County residents have gotten their first vaccine and .89% have gotten their second. Covenant Health is now providing drive-through appointments, releasing the following statement today, “Starting Jan. 13, 2021, Covenant Health began providing recurring, appointment-based, drive-through distribution of COVID-19 vaccine to individuals ages 75 and older at the Fort Sanders West campus in Knoxville. Vaccines were offered based on available supply and by appointment only through Covenant Health affiliations, and all appointment times are full.”

The Knox County Board of Health meets tonight.

As the Knox County Health Department made clear in their media briefing yesterday, they are not performing contact tracing and are only contact people who are positive if the Health Department learns of their positive test within seven days. This means the task of contact tracing in schools falls completely on parents reporting test results to the schools and the schools or parents notifying contacts. This seems necessarily to dictate that cases will be underreported, and spread will be worse.

The school system is reporting 234 active cases, up from 202 the previous day. The 234 includes 169 students and 65 staff members. The number is approaching the high of 266 recorded in December. The system reports 2,182 students and staff have recovered from the illness.

There are currently 1,782 in quarantine or isolation, including 1,552 students and 231 staff members. The number shot upward overnight from 1,258 the day before. It remains well short of records set in early December of over 2,900.

All metrics remain the same, with student and teacher attendance, bus and cafeteria service all rated green, while custodial service is rated yellow and substitute availability remains red. Schools on virtual only learning remain the same as yesterday: