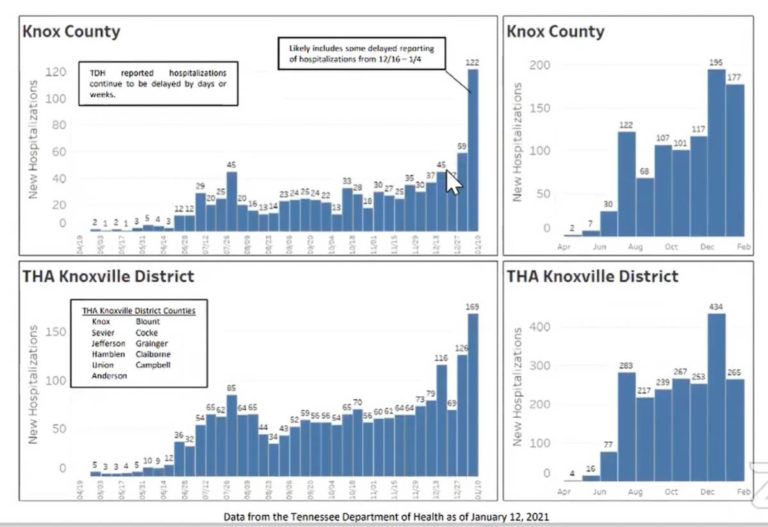 District and County Hospitalizations by Week and Month

The meeting began with the public forum, which included the following speakers.

As previously requested, the board could respond to the forum speakers. Dr. O’Brien thanked Mr. Hill for bringing up the issue of threats and said they all condemn threats, just as they condemn the ones the board has received. He noted they have had to request extra protection. Dr. Hurt thanked both speakers for their tone and for trying to find common ground. She said all violence and threats should be condemned.

Dr. Gotcher said that he agreed and said there have been threats against the board and their families and he assumed the threats were like those against the County Commission. Dr. O’Brien thanked the county commissioners who have spoken with him in recent weeks looking for common ground. He said he hopes that Commissioner Ward will not go through with his resolution dissolving the board.

Dr. Buchanan presented the current situation and updated benchmarks. She began by discussing vaccinations and Mayor Jacobs interjected that, while the KCHD is the primary distributor of vaccines at this time, it is anticipated that will shift to regular providers, such as pharmacies and doctors.  Dr.  Buchanan agreed and said that an online registration system should be available this week.

Mayor Jacobs also noted that Knox County is different because we are set up to be independent of the state Board of Health. He pointed out that smaller counties are not seeing the same “uptake” rate in their populations and so may have moved to more advanced phases than our county. Dr. Buchanan said some of those counties were also more in need. Dr. O’Brien asked about the move to 65 and up as a priority group and Charity Menefee pointed out that we do not currently have the 70,000 vaccines to cover that population in Knox County. The KCBH has been given 4,700 vaccines.

Dr. Buchanan discussed the benchmarks, reported here in the previous article. She said during the last 14 days cases had climbed, though not relative to some of the periods before and that we need to wait to see if current numbers are truly indicative of where we are. She said the pace of testing has remained stable during this period. She noted the downward trend in hospitalization numbers but added that we have averaged four deaths a day during this period.

Ani Roma mentioned the differences between state and local numbers and said it had been questioned. Charity explained that the primary difference is due to reporting times. At other times there are discrepancies in addresses and the reporting at one end or the other may different. She said deaths are reported as they get them, but the state, which reviews every death, takes longer to announce numbers due to the review process.

Dr. Buchanan reviewed the changes in contact tracing and explained that contact tracing at this level of transmission is not as useful. Additionally, she said resources had to be shifted to the vaccination effort. Ms. Wagoner pointed out that the school system continues to contact trace as they have from the beginning.

Dr. Shamiyeh gave the hospital report. He said initially the drop in cases was assumed to be related to a drop in testing, but since it has been persistent, it may be that a change has in fact happened. It seems to have stabilized and they are beginning to think it might be a real decrease. He said he is pleased with the numbers for the last several days but feels we must wait to see if it persists.

Upon being asked, Dr. Shamiyeh discussed antibody treatments which have been approved for specific groups and only for those not yet hospitalized. He said there are a lot of challenges to infusing COVID-positive patients, but that is being done, though complications limit how many can be infused each week. He speculated perhaps that has helped keep some people from being hospitalized and that may account for some of the drop in hospitalizations.

Dr. Shamiyeh said last week there was a stress to ICU capacity, but the situation eased. He said there was no point at which anyone needing ICU support could not get access. He noted the surge in deaths which started in mid-December and said that also may be a contributor to some of the dropping hospitalization numbers.

Dr. O’Brien expressed concern regarding photos he had seen of crowds of unmasked young people at “a downtown establishment” and implored the community to continue limiting gatherings and wearing masks. He asked that businesses review their practices.

The group discussed whether, as the first speaker in the public forum suggested, they might consider differences between particular bars or restaurants. Dr. Buchanan said that it is difficult enough to enforce as it is and that would make it more so. Ani Roma expressed concern that the regulation singles out particular types of establishments and that it may do more harm than good by causing some of the pushback we have seen. She said she does not want to see restrictions lifted but is concerned.

Dr. Shamiyeh said he is hesitant to lighten up just as we see our first sign of a reduction in cases. He also speculated that more people in the community know someone who has been hospitalized or died and perhaps that has changed community behavior. He also mentioned the snow as a possible help in discouraging people from getting together at Christmas. He said he does not want to get more restrictive but is hesitant to back off.

Dr. Souza agreed and pointed out we are about to have the return of UT students, which precipitated a surge last fall. Dr. O’Brien said he is feeling this may not be the time to lighten up, but we may soon want to simply follow the Tennessee Pledge. Dr. Shamiyeh cautioned that we do not react to these numbers as if they are far better when perhaps we’ve simply become accustomed to this level.

Dr. Buchanan recommended that the restriction be continued to February 4. The motion passed with everyone except Ms. Roma and Mayor Jacobs voting yes.

Dr. Souza motioned that the limitations on gathering sizes be continued. It was also extended to February 4 with everyone voting yes except for Mayor Jacobs.

The group unanimously passed a resolution condemning all threats of violence directed toward any group.