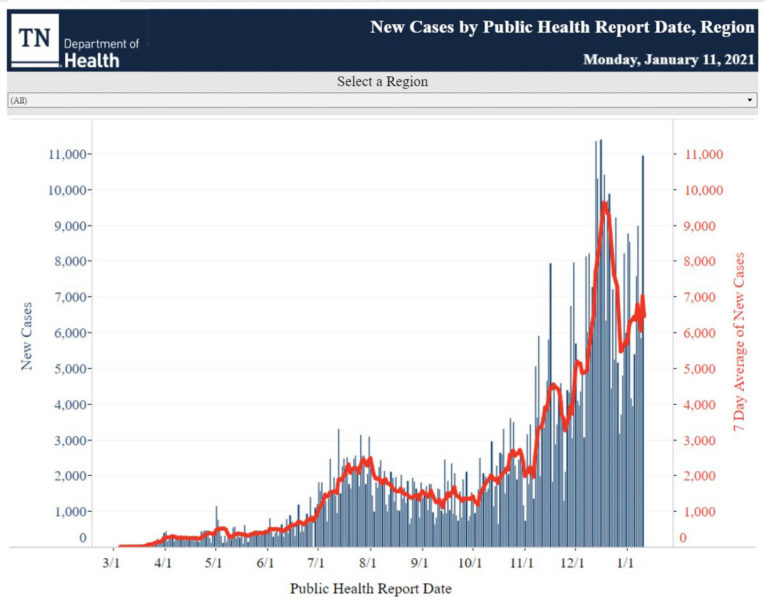 I hope everyone is doing well as we work our way through the first full work week of the year for many people. Work has been a theme for the last year. For some it has become easier, working from home in comfortable clothes, for others it has become more difficult as their jobs do not easily conform to the new virus parameters. Of course, many have lost work and, with it, pay. It is a reason to be thankful if we continue to work, even if it is harder, and a good time to remember and care for those whose work has been disrupted.

Rather than picking up momentum, state testing has dropped once more. My concern is that we have large numbers of friends and neighbors who are not being tested and may be positive and spreading the virus. I’m not sure what the hold up with testing would be this far out from the holidays. It may be impacted by the fact that many of the same people offering tests are now trying to administer vaccinations.

There is also another incredibly significant oddity to the graph used by the state to represent new cases. The number of new cases reported Sunday and Monday have been combined into one column listed for Sunday and no column has been added to represent yesterday’s numbers. The graph, therefore, shows a spike for a single day, which is more accurately, a two-day total. I assume they will make corrections to the graph when they catch the error.

The state reported 3,527 new cases of COVID-19 yesterday, bringing pandemic totals to 567,602 confirmed cases and 89,794 probable cases among state residents. 568,910 are considered to have inactive cases, while 80,621 currently have an active case of the virus. The state is averaging 6,449 new cases a day over the last seven days.

That bit of good news extends to ICU and ventilator numbers, which have also declined slightly. There are currently 732 state residents with the virus in ICUs and 418 on ventilators. ICU numbers were at their worst on December 30, with 806 COVID-positive patients. Ventilator use for the illness peaked to this point at 473 on January 7. As a result of these declines, capacity numbers are better, with hospital beds at 86% capacity and ICU beds at 90% capacity.

An additional 80 deaths from the virus were reported by the state, bringing that total to 7,865. After yesterday’s peak of 109, the seven-day average for deaths in the state dropped to 99. The drop was a result of January 4th’s 143 deaths rotating out of the seven-day span.

The state reported just under 21,000 tests, just over half the number reported the day before and the lowest daily total since the end of the holidays. Interestingly, even with the drop in tests, the positive percentage also dropped to 16.93%, still over three times as high as we’d like, but better than any recent numbers. As a result, the John’s Hopkins University reading of our seven-day average has also dropped to 20.6%.

The state has not updated the vaccination report since 1/7.

The state has released a new sign-up system for appointments that links to all the county sites. Only those in an eligible group who are currently being vaccinated will be able to sign up for an appointment. Knox County is not participating.

Taken as a whole, there are encouraging numbers, here, whether produced by anomaly or by lower testing, we’ll have to wait to learn. That said, case numbers and positive test results are down. Hospitalizations, ICU, and ventilator use is down. It may be temporary, but for now, it is encouraging.

Reflecting the previously discussed drop in reported tests, Knox County’s new case numbers also dropped. The county today reported 191 new cases, bringing the pandemic totals to 33,975 confirmed cases and 4,497 probable cases. Of these, 32,696 are inactive, while 5,397 Knox County residents have active cases of COVID-19. The number of active cases is just off yesterday’s pandemic high of 5,417.

In a statement issued by the health department, it was reiterated that Knox County’s demand is far outstripping demand for vaccinations. All 4,700 vaccines allocated to this point have been used or scheduled for use. Dr. Buchannan added the following:

We know it’s frustrating, and we wish we had more vaccine, too. We are glad so many people want the vaccine, but we just don’t have the supply right now. For instance, we don’t have enough vaccine to vaccinate every Knox Countian who falls in the 1a priority category, so be prepared that it could take many months to move through all of the phases.

Charity Menefee began today’s session by thanking those helping with the vaccination effort. She said she feels the pace will increase soon. She said there are currently no available appointments and they request the public not call. When more vaccine is available appointments will be opened. Vaccinations are currently being given to people in the top priority groups and over 75 years of age. She said supply will not likely match demand for several months.

She confirmed the local numbers reported above.

The number of active cases of COVID-19 reported in the Knox County Schools has dropped from 219 to 202. Of the 202, 141 are students and 60 are staff members. The drop came among the student group, which yesterday was reported at 159. 2,147 are reported as recovered, and 1,258 are in isolation or quarantine, up 130 from the previous day.

In an illustration that the metrics do not apply evenly across the system, two schools failed to make it through the first full week of school and have been temporarily closed to in-person learning due to issues with both teacher and student attendance. The two schools will be closed for one week.