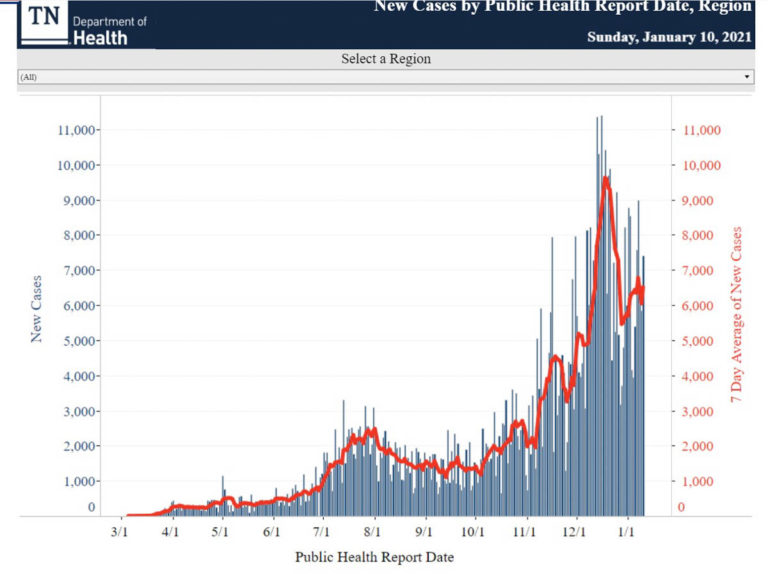 Welcome to a fresh week. Here’s hoping we can get through this one without an event that arrests our attention in front of a television. Wouldn’t it be nice to say, “Not much,” when asked what happened in the news over the course of a full week? Enough drama.

I hope your weekend was a good one. We watched Disney Pixar’s “Soul,” and I have to say it is far-and-away the best movie I’ve seen since I’ve returned to kid-friendly-only programing. I’m not sure why the kids liked it, though they did. It’s an interesting exploration of life and death with heavy doses of jazz, which makes perfect sense. It even features a Bob Dylan song though, for the life of me, I can’t figure out how it fit with the narrative.

The previous week saw a single-day record 760,624 new cases set on December 31. This past week, that pandemic record was exceeded three times, with new cases crossing 800,000 for the first time and doing so three times during the week. The new record high for a single day is 833,976 cases, set on January 7. The seven-day average now sits at a pandemic high of 724,988 cases per day, up over 100,000 from a week earlier.

The single-day record 15,220 deaths set on December 30 was not broken this week, as two days fell just short of 15,000. The average number of deaths each day, however, is now at an all-time high of 12,844 international deaths daily. The average increased by nearly 1,800 per day this week.

As vaccines are rolled out across the world, specific questions are being asked about the implications as increasing numbers of people are vaccinated. Here’s one look at real world situations for re-connecting with family. Fodor’s took a pretty extensive look at travel, including what’s allowed and what is smart.

Germany has enacted stricter rules to quell the virus, that include only one person at a time being allowed to visit a home where they do not live and some people are limited to staying within nine miles of home. For the first time, Chinese officials are allowing representatives from WHO into the country to examine the origins of the virus. Malaysia is one of a number of countries imposing stricter measures after a surge there. This with a total of 551 deaths for the duration of the pandemic, and showing the wide range of acceptable numbers determined by governments across the world. Malaysia has a population of over 32,000,000 people.

1,794 deaths were reported yesterday, with the average now at a pandemic high of 3,306, up from 2,696 a week earlier. The shuffle at the top for states reporting the most deaths continues, with Massachusetts and Illinois being replaced this week at the top by Texas and North Carolina. The states reporting the highest death tolls from yesterday were California (283), Texas (157), New York (145), North Carolina (142), and Florida (106).

Vaccinations continue to roll out much more slowly than previously hoped. After suggesting that 20 million people would have their first shot by the end of the year, only 6.7 million have been vaccinated as we approach mid-January, though over 20,000,000 vaccines have been sent to states. In the face of discarded vaccines due to the strict categories regarding who can be vaccinated, New York is expanding its list of eligible people. News also hit this week that a number of businesses got $1 loans via the PPE.

President-elect Biden has vowed the federal government will distribute 100 million vaccines in his first 100 days in office and has made dealing with the virus his first priority. The move represents a somewhat controversial decision to get the vaccine out more rapidly for first shots, as opposed to holding vaccine back for second shots.

State testing continues to be in a low-to-mid range average for the last several days. It’s recovered from the depths to which is fell during the holidays, but has yet to return to the pre-holiday level. This continues to impact case numbers, active case numbers and positive test results. Some recovery was evident last week, so perhaps this week will complete the return to high testing levels.

The new cases bring the pandemic total for the state to 564,674 confirmed cases and 89,195 probable cases. Of these, 565,197 are considered inactive, while 80,887 Tennesseans currently have an active case of the virus. There are about 6,500 more known active cases than the same day a week ago.

53 additional COVID-positive Tennesseans were admitted to the hospital yesterday, bringing the pandemic total to15,307 since the beginning of the pandemic. Reported current hospitalizations have dropped by about 300, with a most recent total of 3,079. Out of this number, there are 759 COVID-positive Tennesseans in ICUs across the state and 449 on ventilators. Each of these numbers are also off highs by about 20 to 40 patients. Bed capacity is at 83% and ICU bed capacity is at 89%, both improvements over recent numbers.

In the three reports since my last article, the state has confirmed 126 deaths on Friday, 86 deaths on Saturday and 81 deaths from COVID-19 on Sunday. Total pandemic deaths in the state have now reached 7,419. The seven-day average is a pandemic high of 109 deaths per day, up from an average of 73 deaths per day a week ago.

The most recent update (1/7) on state vaccination numbers puts the number of vaccinated Tennesseans at 215,427, or about 3.2% of the population. The site reports 13,208 vaccines were administered in the previous 24 hours. At that rate, all Tennesseans would be vaccinated in the next 501 days, or by May 27, 2022.

Since the last article, the Knox County Health Department has reported 395 (Saturday), 343 (Sunday) and 339 (today) new cases. New totals for the county are 33,784 confirmed cases and 4,442 probable cases. Of these, 32,436 are considered inactive, while the health department is reporting 5,417 active cases in the county. The number of active cases is just shy of the record of 5,429 reported on December 23.

After peaking at 205 COVID-positive Knox County residents in the hospital on January 5, the number fell for five consecutive days before rising again today to 180, still off the record.

Deaths reported since my last article include three Saturday, six Sunday and three today. Four of those who died were between the ages of 64 and 75, while eight were age 75 or older. A total of 373 Knox County residents have died of COVID-19. Deaths for the first eleven days of this month have outpaced last month’s record numbers by a total of 49 to 41.

The state is reporting a 22.5% positive test result for Knox County over the last seven days. The state vaccination website reports 3.1% of Knox County residents have gotten the first of their two shots to protect against COVID-19.

Representatives from Covenant Health held a briefing this morning with the intent of discussing vaccinations. They reported that 60-65% of hospital staff have been vaccinated locally and that it has improved morale significantly. While they still have a small number who are hesitant to take the vaccine, many who were previously hesitant are now getting the shot.

The hospital representatives said they have not seen any extreme reactions and the primary complaint has been soreness in the arm. They hope to have all willing hospital employees vaccinated with the first injection in the next couple of weeks and everyone completely vaccinated within the next five-to-six weeks.

They are currently developing plans with the Health Department and with local physicians for distribution to the general public (for those who meet the current criteria at the time) vey soon. They said predicting supply levels is still not possible as they are reliant on when the state gets new shipments of the vaccines.

Asked when the new vaccines should start making a difference in the community, they said there is no way to predict, but spread will only stop when the county approaches 70% immunity either through exposure or vaccination. They stressed that everyone must continue following the five core actions and that we are in no position to rely on the vaccine for community mitigation of the illness at this time.

With Knox County Schools students only attending in-person classes three days last week, there continues to be an unevenness in the data, which should soon rectify itself. The schools are reporting, as of Friday afternoon, 219 active cases of COVID-19 among students and staff. The number is  down slightly from the 226 the day before and includes 159 students and 60 staff members.

2,055 are considered recovered, while 1,128 are currently quarantined or in isolation. This number is up slightly from 1,068 the day before and includes 954 students and 174 staff members. All metrics remain green except custodial staffing, which is yellow and substitute availability, which is red.