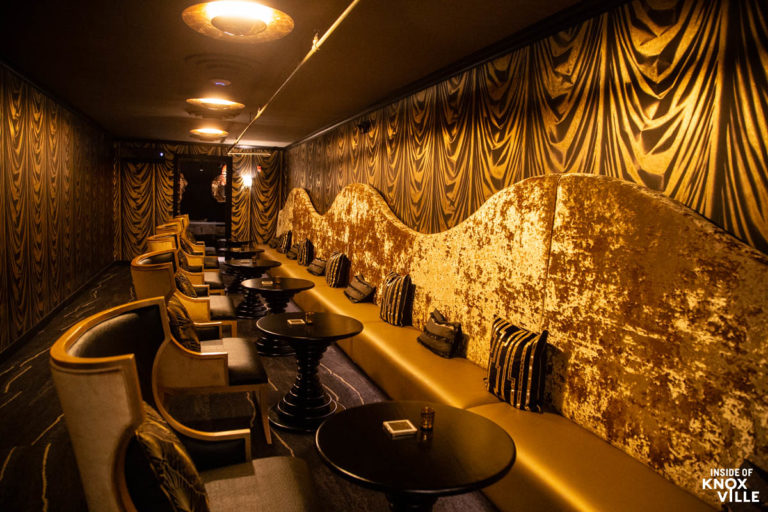 There are some projects that impress me and there are others that blow my mind. This would be one of the later. I first toured the space in 2014 and it looked nothing like a potential posh night club. The word “dungeon” comes to mind. My best thought was it could be a kitchen to serve the restaurant above.

New owners Jim and Lori Klonaris had bigger things in mind. The former “dungeon” is now home to The Vault, an elegant bar that seems like a throwback to an earlier, more elegant time, like Hollywood in the 1930s. Located at 531 S. Gay Street beneath Vida (which I profiled earlier this week), entry to the bar is via the patio doors on Krutch Park.

Starting with the marble stairs leading downward into the space beneath the sparkling chandelier, the ambience continues with a sitting area at the bottom designed to exude warmth and luxury. Former booths in which bank customers reviewed the contents of their safe deposit boxes, are now illuminated, and preserved small alcoves for seating. The hand-plastered ornamentation above the seating was in poor repair and a master craftsman was brought in to restore it to its original state.

Beyond the bar, seating is provided inside the original bank safe. Each of the intricate safe doors remain in place and have been lighted for display. At 6,000 pounds each, they would have been difficult to move. The room is lined in metal and cement above, below, and on each side, making the space have a rare, hushed quality.

Just through the back side of the safe, small, private, softly lighted seating lines the corridors. A second safe on the south side of the space has been preserved and features the two metal gates which were removed from inside the primary safe’s doors. The third, perfectly matched door was donated when a guest was taking an early tour and realized she’d had a duplicate in her garage for decades. The gates now surround the wine cellar, which lighted and visible through the bars.

The cocktail program created by Chris Williams features gin drinks made with gins from around the world. Matt Leonard, bar manager, previously served as bartender at the Peter Kern Library. In addition to the signature cocktails, the menu also features low and no-alcohol drinks, as well as beer, wine and a list of luxury alcohols.

The food menu includes seven different charcuterie boards, snack bowls with nuts popcorn and more. For something sweet, plates of seasonal cookies and cakes, a chocolate board, coffee cake and a flourless chocolate torte are offered.

Live music is planned to include acoustic or jazz which will be heard throughout the space via a high quality integrated sound system. The club is open to the public, but also offers the Reserve, special memberships with perks such as reserving a table and much more. The club is open seven days a week.