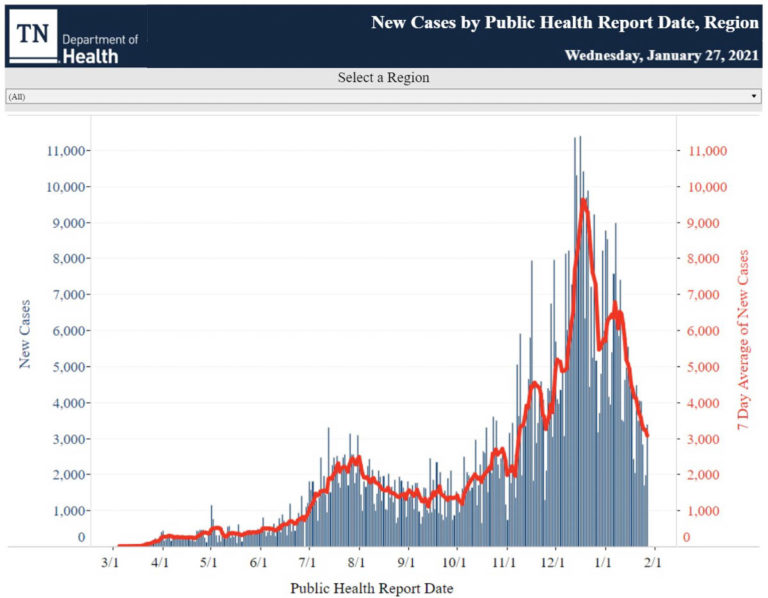 Good Thursday to you all. That was quite a snow, wasn’t it? We spent the morning delayed two hours from walking down the hall to our various classrooms at Urban Academy due to the inclement weather outside. It was a treacherous walk when the students made it but make it they did. One day they will tell stories . . . “When I was your age, I had to walk twenty steps down a long hallway while an imaginary snowstorm raged outside, just to get to school.” It might bear some explanation in the future, less bizarre world.

The state of Tennessee reported 3,400 new cases of COVID-19 yesterday, bringing totals to 609,183 confirmed cases and 106,623 probable cases. 668,021 cases are considered inactive, while 38,469 Tennesseans have active cases. The seven-day average for cases is now 3,074, the lowest reported average since November 8.

An additional 116 Tennesseans were hospitalized with the virus, bringing the number to 16,823 since the beginning of the pandemic. 1,999 COVID-positive Tennesseans are currently hospitalized, including 554 in ICUs and 337 on ventilators. It marks the first time total hospitalizations for the virus have been under 2,000 since November 17.

While the drop in hospitalizations is good news, it is worth noting that most people who die of the illness are in the hospital. That is worth mention because more people died of the virus in the state than were admitted to the hospital yesterday which would cause census numbers to drop in and of itself. Add people who were discharged, and the sharp drops make sense. It seems logical to me that the sharp declines in cases and hospitalizations will end soon, hopefully replaced only by slower declines, and that deaths will experience a sharp decline.

The number of deaths reported in the state continue to be quite high relative to our history with the illness. After reporting the largest single-day death total the day before, with 192 deaths for the day, yesterday’s total was 154. This is the third highest single-day total and the 346 deaths over the two-day period is far higher than the total for any other two day period. The seven-day average has moved up, as a result, to 109 deaths per day, tying the record set on two days earlier this month.

Testing made a recovery to previous post-holiday levels yesterday, with the state reporting just over 26,000 tests, leaving the pandemic total for state testing at over 6.2 million. For the day, the state reported an 11% positive test percentage, while Johns Hopkins University pegs the seven-day average for positivity at 13.4% and dropping.

The state is updating vaccination numbers more routinely and, happily, the pace is increasing. Much of the increase may not be visible to those of us who are waiting because the numbers are likely coming from the CVS/Walgreens agreement to vaccinate people in various sorts of senior housing. This should have an impact on our death rate in a relatively short fashion. When they are finished with that round, presumably, they will turn their attention to the next groups down, giving another outlet for vaccinations.

The state is now reporting, as of January 26, 528,630 vaccinations have been given. The number includes first and second doses. The day prior to this report, 40,406 were given and 160,153 were given in the previous seven days. If this pace were maintained to the end, 100% of Tennesseans could have their vaccine in the next 574 days or by August 23,2022.

The Knox County Health Department is reporting 200 new cases today, bringing Knox County’s totals to 36,786 confirmed cases and 5,513 probable cases. 39,051 are considered inactive, while 2,782 Knox County residents have an active case of the virus. It’s the lowest number of active cases reported in the county since December 7.

The decline in hospitalizations continues but, at least for the moment, has slowed. There are 93 COVID-positive Knox County residents in the hospital, one fewer than yesterday. 1,119 county residents have been hospitalized at some point during the pandemic. The number currently hospitalized is the smallest for the county since November 22 (90).

As noted with the state numbers, deaths are necessarily part of the reduction in hospitalizations. While death reporting and hospital reporting do not precisely line up, the county reported eleven COVID-related deaths for the day today and, presumably, those were people who had been hospitalized.

The 20 deaths reported in the last two days is comparable to the individual monthly totals of August, September, or October. 466 people have now died in Knox County because of COVID-19. Of those who died yesterday, one person was between the ages of 45 and 64, two were between 65 and 74 and eight were 75 years old or older.

The state is reporting a 12% positive test rate for Knox County. It is also reporting 3.64% of county residents have gotten their first shot only, while 2.14% have gotten both. I made an error in a previous article by thinking the second number is a subset of the first. In fact, they represent two groups, meaning the total percentage in Knox County who have gotten at least one shot is 5.78% based on the latest state numbers. I erroneously compared the first number (3.64%) to the state average, which is a total of the two. It’s only going to get more confusing when we begin use of single-shot vaccinations and try to report all the numbers together.

Charity Menefee began today’s meeting by expressing gratitude to the interpreters from the Knoxville Center of the Deaf. She introduced the new Knox County dashboard for vaccinations. It gives not only the percentage vaccinated, but a demographic breakdown. It also includes the phases. She pointed out that demand continues to far out-strip demand.

Tomorrow announcements will be made for appointments for 2,000 first vaccines to be administered next week. You may call 215-5555 for an appointment after the announced time. They hope to make the wait-list system available next week.

She confirmed the above numbers. She discussed the benchmarks, which were covered in this morning’s article.

As of yesterday afternoon, the Knox County School system is reporting 219 active cases, up from 203 reported yesterday. The number includes 168 students and 51 staff members. The number is up over the previous two days, but still below highs set earlier this month.

2,630 have recovered and 2,140 are now in isolation or quarantine, also up over the last couple of days, but down from previous highs. Included in this number are 1,960 students and 180 staff members. The only change in metrics from yesterday, moves the custodial measure from red to yellow.

The schools on virtual-only instruction remain the same as yesterday:

An interesting note on the UTK numbers: Numbers in this situation (at every level) fluctuate in ways that sometimes do not make sense. New information is received and numbers are adjusted. At first, I thought I must be going crazy or perhaps I had read the previous numbers incorrectly. Today’s UTK report offers a great example:

The University is reporting, as you can see on the graph above, 2,573 students and staff have recovered. Good enough. But if you look at yesterday’s article, in which I used the same graph, they reported 2,582 had recovered. The two numbers can’t both be correct. It underscores that many people are scrambling to put out all kinds of numbers they don’t normally assimilate. In many cases they are trying to do the job they were hired for at the same time. Mistakes and adjustments are made.

The university is reporting 86 active cases, up from 81 the day before. As they have been, active case numbers are increasing, but not rapidly, and not at near the levels of the beginning of last semester. Six new cases were confirmed yesterday, and 287 students and staff are in quarantine or isolation, a number that is also rising, but not near levels seen last semester.