Board of Health Meeting 1/27/2021: Slight Easing of Restrictions 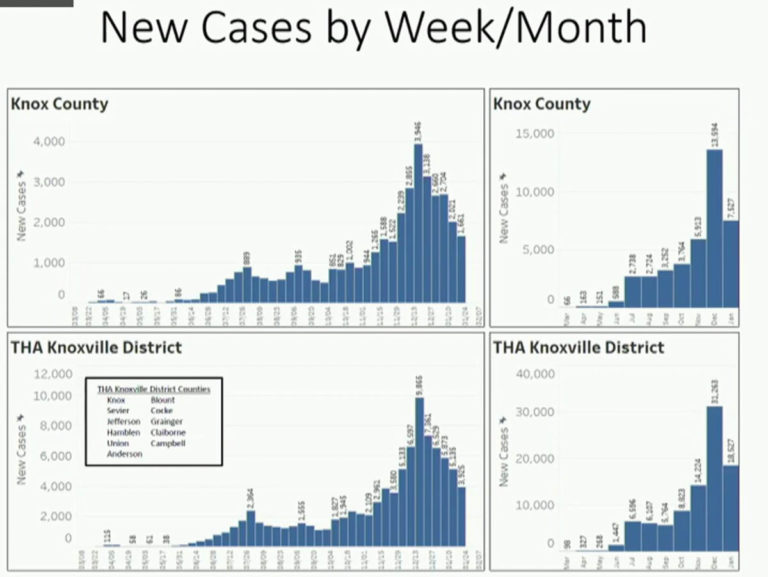 New Cases by Week and Month for the County and Region

Dr. Buchanan began the meeting with a presentation of the current situation (covered in previous article), as well as the benchmark information. She said 34,000 vaccinations have been given in the county, or 7.4% of population. She said the numbers will be updated weekly and are from the state Department of Health.

She noted that daily new cases dropped to 179 per day during this reporting period. That metric will remain yellow. Regarding testing, she noted the decrease in the community and at KCHD. Less than 200 per day are coming to the KCHD for testing, down from over 400 per day before the holidays. Lab turnaround time is about 1.5 days. The benchmark is yellow.

Public Health capability will be changed to reflect the reality that vaccinations are the focus. It is not given a rating at this time. Hospitalizations have dropped, though remain at a high volume, and that metric will be changed to yellow. Deaths continue at the same rate as the previous period and will continue to be rated as red.

The positive test rate has fallen from the mid 23% range to the 15% range. Given the lag between cases and hospitalizations and deaths, the hope is deaths will drop in the weeks following lower case counts. She urged people to continue to follow the five core actions to preserve the progress.

Dr. Shamiyeh asked if there would be a point at which contact tracing might once more make sense. Dr. Buchanan said it was a good question and she would discuss it with her team. She did point out that vaccinations must be the focus at this time.

Dr. Shamiyeh gave his report. Noting the numbers are particularly good, he said there is certainly a possibility for a future spike. He said the deaths continue, but the trend could be better soon. He said the snow may have helped, but he also said he thinks most people now know someone who has had the illness and maybe a serious case, and as a result they may have become more careful. Dr. Buchanan agreed.

Dr. Gregg, reporting for UTK, said the school has seen an uptick in cases, but nothing resembling the spike seen in the fall. He said saliva testing is running about .4% positivity rate, which is exceptionally good. He told the board that commuter students are also being encouraged to participate in the group testing. Dr. Sousa brought up a study of a public school system that seems to be taking similar precautions to ours and the study showed very little-to-no inside school transmission.

The group briefly discussed the mask mandate, though no one suggested lifting it.

The discussion regarding the 10 pm curfew for bars and restaurants was more robust. Dr. Gotcher said the positivity rate still being high, it made sense to him to continue it. A motion was made to extend the curfew. Dr. Sousa said perhaps 11pm might represent an accommodation to loosening the restriction without abandoning it. Dr. Shamiyeh said he is like minded since there has been progress, but he didn’t want to subvert our gains.

Ani Roma said she had talked to a bar owner on the strip who said the extra hour or two would make a difference. She mentioned watching sporting events which continue past the curfew for bars. Dr. Buchanan countered that the behaviors watching sports in bars are the behaviors that spread COVID-19. Ms. Roma said she feels the regulation being directed at one industry is contributing to some confusion. Dr. Shamiyeh said a general rule is that when you are in trouble, you shut down quickly and when things are better, you open slowly, so he would be more in favor of going slowly.

Ultimately, the motion was made to extend the regulation, but to change it to 11pm. Ms. Roma and Mayor Jacobs voted no, with everyone else voting in favor and it passed.

Dr. Buchanan discussed the most recent community health assessment, which was completed prior to the pandemic.

With that, the shortest Board of Health meeting since the beginning of the pandemic came to an end after just over an hour. You can watch the entire meeting below.