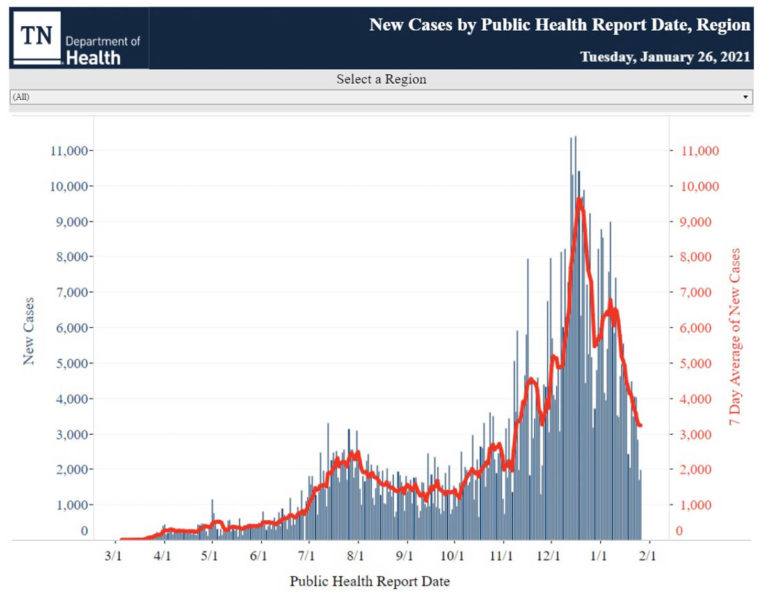 I hope you enjoyed the sunshine yesterday. Downtown was still slow, as it has been, but the sunshine made it feel a bit better. Urban Boy and I had a little basketball duel and I sat outside to do an interview, which felt a little more like my previous normal. I hope you are finding small bits or normal as we work our way through. Better days are coming.

The state reported 1,979 new cases of COVID-19 yesterday, brining state totals to 606,592 confirmed cases and 105,814 probable cases. 662,533 people are considered recovered or inactive, while 40,711 have active cases of the virus. Reported active cases have dropped by over 50% in the last five weeks. The seven-day average for new cases is 3,228, or about 1/3 of the number five weeks ago. It is the lowest seven-day average since November 8.

147 COVID-positive Tennesseans were admitted to the hospital yesterday, one of the highest single totals I’ve reported. It brings the number hospitalized to 16,707 since the beginning of the pandemic. That said, current hospitalizations continue to trend downward, though the drop seems to have slowed. 2,026 COVID-positive Tennesseans are currently in the hospital, about 30 fewer than the day before, but far below the 3,300+ of just three weeks ago. ICU and ventilator numbers also continue to decline and are now reported at 577 and 345, respectively.

Sadly, part of the reason for the decline in hospital census every day is deaths. Today, that is truer than other days, with the state reporting a single-day record of 192 deaths, bringing the total to 9,162 deaths from COVID-19 since the beginning of the pandemic. The rate of deaths in the state, after dropping for eight days, has now risen for the last six. The average daily deaths over the last seven days is 98.

Reported testing continues to explore new lows. The state reported 8,529 tests for the day yesterday, the fifth lowest daily total since last July. There can be no doubt that the low case numbers are at least partially explained by the small number of tests. In December, the state was routinely testing five times as many people per day. At current rates, that level of testing would have given us close to 10,000 cases for the day, yesterday.

The state updated vaccination numbers through 1/25, reporting 505,267 total vaccinations have been given, including 18,670 the previous day and 140,970 the previous week. 5.9% of state residents have had at least one shot. At this rate, we might expect to have all Tennesseans vaccinated within 653 days, or by November 9, 2022.

94 COVID-positive Knox County residents are currently hospitalized, with the pandemic total reported as 1100. This marks the first time the hospital census as dropped below 100 since November 13 and the lowest number reported since November 12. There are fewer than half the number in the hospital as was the case just over 3 weeks ago.

As mentioned above in the state report, the number hospitalized dropped significantly because of deaths. Nine additional deaths were reported today, the sixth highest daily total of the pandemic. Total deaths of COVID-19 in the county have now reached 455. Those whose deaths were reported today include one person between the ages of 45 and 64, two between the ages of 65 and 74, and six people 75 years of age or older.

The state is reporting a 16.1% positive test rate for Knox County over the last seven days. Surprisingly, it also states that only 2% of tests reported yesterday were positive. The state vaccination dashboard reports 3.59% of Knox County have gotten their first shots, while 1.98% have gotten the second shot.

As a general measure, many rural counties are ahead of the urban counties in vaccination rates. In the primary counties for each of the urban areas in the state, the rates are similar. First vaccine rates for those counties: Shelby County (Memphis) is at 2.79%, Davidson County (Nashville) is at 3.34%, while Hamilton County (Chattanooga) has given first vaccines to 2.88% of its residents. Looking through this lens, Knox County has a faster delivery rate than any other urban county in the state at this time.

After dropping yesterday, active cases reported by the Knox County Schools rose from 188 to 203. Of these, 152 are students and 51 are staff members. 2,619 students and staff have recovered, while 2,006 are in quarantine or isolation. This number increased by 229 over the previous day and includes 1,837 students and 169 staff members.

Metrics for the system remain unchanged, with teacher and student attendance, cafeteria and bus service, all rated green and custodial support and substitute availability rated red. Some schools are harder hit than others, however, and while one school dropped off the virtual-only list, two were added overnight. The current list includes:

The number of UTK students with active cases of COVID-19 has slowly risen since their return, from 54 on January 20, to 67 a week later. Active cases among staff have remained steady. The total reported today is 81. 2,582 students and staff have recovered, while 7 new cases were reported yesterday.