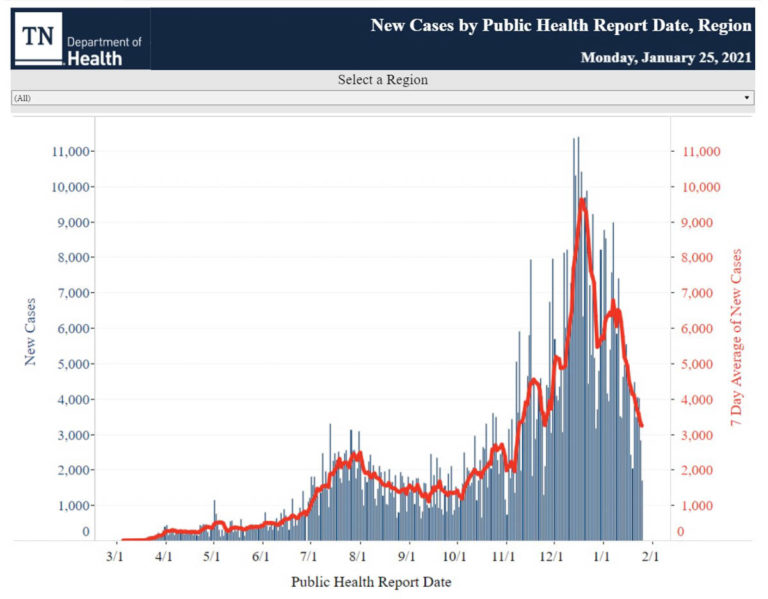 Be sure to wear your parkas today. It’s going to be a chilly 62 degrees in late January! I don’t know if it is global warming, a bizarre fluke or maybe just our traditionally weird weather in the valley, but it is a great chance to get outside and shake off the stir-crazies. Hopefully, when the weather is warm for good, maybe in June or July, we can do so with far less concern about a certain virus.

Hospitalizations also continue to drop quickly. 56 COVID-positive Tennesseans were admitted to hospitals across the state yesterday, bringing the pandemic total who have been hospitalized to 16,560. 2,067 are currently hospitalized, down from over 3,300 earlier this month. 592 are currently in ICUs across the state, while 361 are on ventilators. Both numbers also reflect significant drops.

Deaths have not dropped as rapidly as the other numbers, though they have dropped and should continue to do so if the case and hospitalization numbers continue to lower. 111 Tennesseans died of COVID-19 yesterday, bringing the total to 8,970 who have died in the state since the beginning of the pandemic. The seven-day average for deaths in the state is 78 per day, down from 80 a week ago (with a dip in between).

Just when it appeared testing may be stabilizing at 20 to 30 thousand tests a day; the bottom drops out again. The state reported 14,033 tests yesterday, bringing the pandemic total to almost 6.2 million tests given. The best news in testing is that the positive test percentage has dropped dramatically. For the tests reported yesterday, the positive test rate was given as 11.98%. After running around 25% earlier this month, Johns Hopkins University now reports Tennessee’s seven-day average for positive tests as 14.1%.

Tennessee’s vaccination dashboard has been updated with information through 1/24/2021. The state has given 486,197 total vaccinations, including 110,759 in the previous seven days. 5.76% of state residents have had at least one shot. At the current rate, the remaining residents of the state would be vaccinated in 832 days, or by May 6, 2023.

The Knox County Health Department is reporting 109 new cases of COVID-19 for the day. The cases bring Knox County’s pandemic totals to 36,483 confirmed cases and 5,389 probable cases. 3,079 Knox County residents have an active case of the virus.

Hospitalizations dropped again overnight, this time to 100 COVID-positive Knox County residents in area hospitals. It marks the lowest hospital census since November 23, when 99 were in the hospital.

Two additional deaths were reported, bringing the total Knox County residents who have died during the pandemic to 446. One of those whose deaths was reported today was in the 65-74 age cohort, while one was in the 75+ group.

The KPD cited three more bars for violating curfews, including regular favorites Billiards and Brews and Paul’s Oasis, along with It’s About Time Tavern. Each of the two regulars have dates in early February to review whether their beer permits will be revoked temporarily. The Knox County Commission did not disband the Knox County Board of Health last night, but kept it as an option to be reviewed in the future. The Health Department reported  72,000 calls were received last Friday by people in search of an appointment for the 1,000 doses of vaccine made available last Saturday.

Dr. Buchanan again thanked those who worked vaccination clinics last week, vaccinating 2,000 people, mostly those over the age of 75. She acknowledged the frustration and said those at the health department share the frustration. She said supply continues to be short. She said they continue to work to have an online system that can handle the volume of demand. She noted that when second vaccines are offered people must take that appointment. Rescheduling is exceedingly difficult at this time.

She acknowledged that testing has decreased due to fewer people asking for tests. She said it is roughly half of what it was a few weeks ago. She said she hopes it indicates a lower disease burden in the community. She confirmed the above numbers. She urged everyone to continue the five core actions to preserve the gains we’ve made.

Active cases reported by the Knox County School system are now dropping in the same fashion as numbers elsewhere. The system is reporting 188 active cases, including 136 students and 52 staff members. The number reflects a drop from 230 just three days earlier. 2,593 are reported as recovered, while 1,767 are in isolation or quarantine. This number includes 1,585 students and 182 staff members. This number has dropped by nearly 500 in the last three days.

All metrics remain green with the exception of custodial staff and substitute availability, both of which remain red. Schools on virtual-only education remain the same:

The University of Tennessee is reporting 71 active cases of COVID-19, up from 65 cases the day before. The total includes 56 students and 15 employees. Five new cases were reported yesterday.

The Student Health Center reported performing 99 tests last week, up from 89 the previous week. Of the 99 tests, 13 were positive.