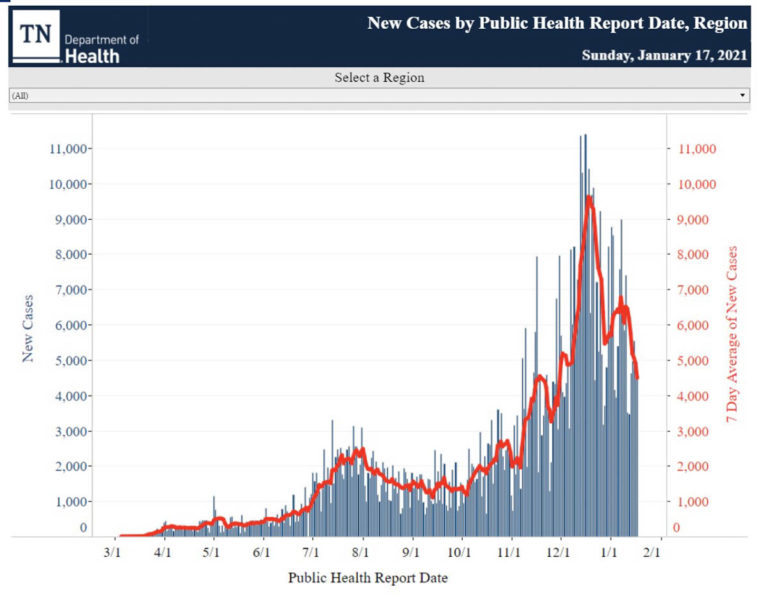 Welcome to another week. It seems like a dark time in our country. Our economy is imperiled, our physical health is threatened, and our political system is in crisis. It may seem hard to find hope, but it is there. There is some encouragement in our battle with the pandemic, though we have some distance remaining.

It is easy to despair and become angry. There is bitterness and anger in every direction, or so it seems. Today is our national celebration of Martin Luther King, Jr.’s birthday. It is a good day to remember his words.

May we all think about that as we formulate our next social media post.

Approximately 95.5 million people worldwide have been diagnosed with COVID-19, including about 4.7 million in the last week. The rate has slowed from the previous week when 5.2 million were diagnosed. About 68.2 million are considered recovered, while about 25.3 million have active cases of the illness, up from about 23.9 million a week earlier. Over 2 million people have died of the illness, including 94,999 over the last week, an increase of about 5,000 over the previous week.

After crossing 800,000 three times the previous week, this past week didn’t see a single day approach that number, with the highest daily case number coming Friday at just shy of 763,000. The week saw a dramatic turn downward for daily cases, with the seven-day average plummeting by week’s end. Average daily cases as of yesterday was 674.9 thousand per day, down from about 734 thousand per day a week earlier.

The rate of deaths has not slowed. During the past week, the previous record for most COVID-19 deaths in a single day, 15,220 on December 30, was broken three times. On January 13, 16,537 deaths were reported across the world, establishing the new single-day record. The average number of deaths each day increased by about 600 over the same day last week but showed some signs of leveling off at about 13.6 thousand per day.

Brazil, the country with the second largest death toll in the world, at over 200,000 confirmed deaths, has finally begun vaccinating it citizens after weekend approval of two vaccines. One is the Chinese vaccine which has recently been shown to be 50% effective. The U.S. vaccination program isn’t the only one off to a slow start. Here’s a look at what’s going on in Europe.

If you hoped to travel to Australia later this year, you might want to change your plans, as indications are they will likely keep the borders locked through the end of 2021. The South Korean government is claiming its vaccination program, which will begin next month, will give the country herd immunity by November. The WHO is focusing attention on the disparity between wealthy and poor countries in the vaccine rollout.

The United States has reported just under 24.5 million confirmed cases of COVID-19, including about 1.6 million over the last week. This is a slower pace than the previous week which saw 1.8 million cases confirmed. Just over 14.4 million Americans are counted as recovered, while over 9.6 million have an active case of the illness, or about 500,000 more than the same point last week. Just over 407,000 Americans have died of COVID-19, including about 24,000 over the last week.

Yesterday 174,560 new cases were reported, along with 1,846 deaths. Compared to the same day last week, this reveals a drop of about 39,000 new cases and an increase of about 50 deaths. The average for new daily cases is 221,610 and has dropped sharply over the week from a then record high of 250,402. While sharp declines in cases in the past have had identifiable causes, I’ve yet to find a reliable explanation for this decline.

With the 1,846 deaths reported yesterday, average daily COVID-19 deaths in the U.S. are now 3,416. While slightly higher than the 3,306 reported a week ago, deaths seem to have, at least momentarily plateaued. Should this continue, it would suggest that the drop in new cases is real and not a statistical anomaly. It continues to beg the question of what has happened. Behavior surrounding the virus does not seem to have improved and the vaccine rollout seems to be too early to have made the change.

The states reporting the most deaths yesterday changed only slightly from the list a week ago, with South Carolina replacing North Carolina among the top group. For the day the states leading in deaths included Texas (209), New York (204), California (201), Florida (132), and South Carolina (129).

Average daily hospitalizations in the U.S., while still high, have dropped over the last week and Johns Hopkins University reports the positive test rate in the U.S., with no appreciable change in testing rates, has dropped from 13.7% to about 10.9% in the last week.

Surprisingly, West Virginia leads the U.S. in the rollout of the vaccine, having rejected the CVS/Walgreens agreement accepted by all other states. Otherwise, most sources agree the rollout has been at the least, disappointing and at the most, disastrous. Last week’s administration promise of a release of the stockpile of vaccines turned to disappointment when it was revealed there is no such cache of vaccine.

The incoming Biden team says it will utilize the national guard in the vaccination effort and will jumpstart the CVS/Walgreens rollout. The incoming director of the CDC is predicting the U.S. will hit 500,000 deaths by mid-January. Early reports indicate about a 12% excess death rate in the U.S. for 2020. While it will be years before we understand much of what has transpired in the last year regarding COVID-19, studies are beginning to examine why some people are hit harder than others with similar ages and co-morbidities.

Over the three days since the last report, the state of Tennessee reported 5,557 new cases on Friday, 4,808 on Saturday, and 4,474 on Sunday. The average number of daily cases continues to fall rapidly and has now dropped to 4,494 cases per day. The drop represents more than 1,000 fewer cases per day than just a week ago. State totals now include 587,694 confirmed cases and 97,627 probable cases.

In the days since the last article here, the state has reported 79 deaths on Friday, 44 on Saturday, and 36 on Sunday. 8,391 Tennesseans have now died of COVID-19. The daily average for deaths has dropped from 109 just a few days ago to 87 deaths per day average for the last seven days.

Testing continues to lower but has stabilized at a low-average spot relative to last fall. Yesterday, the state reported about 29.7 thousand tests, bringing the pandemic total in the state to over 6 million. More importantly, test positivity rate in Tennessee, as it has in the U.S., continues to fall in the state, with a reported daily positive rate yesterday of 13.1%, far lower than pre-holiday Tennessee when we were giving more tests. Johns Hopkins University, similarly, is reporting a dropping average positivity rate for the state and now reports a 17.5% average for the last seven days.

The state’s vaccination dashboard was updated as of 1/14 and reports 330,775 vaccinations have been given in the state, with 16,657 the day prior to the report. At that rate, given that everyone will have to be vaccinated twice, the state would be projected to vaccinate everyone in the next 800 days or by March 29, 2023. The hope is that not only the pace will improve, but other vaccines may come online that only require one jab.

Since the last article, the Knox County Health Department has reported 220 new cases of COVID-19 on Saturday, 147 on Sunday and 274 today. This brings our county totals to 35,289 confirmed cases and 4,856 probable cases. Of these cases, 35,616 are considered inactive, while 4,122 are considered active. Remarkably, this is the lowest number of active cases in the county since December 14, over a month ago.

Deaths, which one would hope would drop soon if the numbers above hold, have yet to decline. Over the weekend, the health department reported five deaths on Saturday, two on Sunday and nine today. The total number of COVID-19 deaths for Knox County has now reached 407.

The state is reporting a 17.9% positive test rate for Knox County over the last seven days. This is nearly 5% better than that reported a week ago.

The Knox County Schools COVID-19 numbers are running contrary to current trends elsewhere, with increases reported steadily since the winter holidays. As of Friday, the system reported 213 active student cases and 64 staff cases for a total of 277 active cases in the system. The number represents a record for the school year.

2,292 are reported as recovered, while a near-record 2,702 are in quarantine or isolation. The number includes 2,444 students and 258 staff members and is second only to the number reached December 10, when the total was 2,894.

Metrics remain unchanged from last week, with all rated green except for custodial support (yellow) and substitute availability (red). Of the schools on virtual-only instruction, one has been added to the list, though two are scheduled to come off tomorrow. The current list: