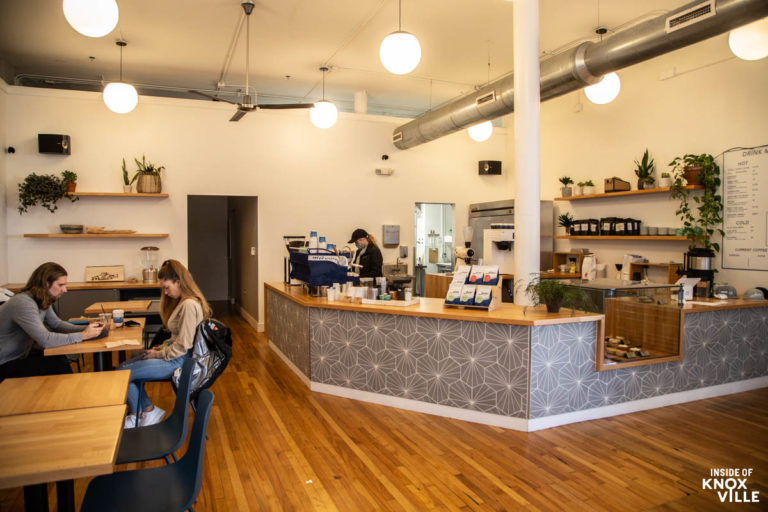 Mahalo Coffee, owned by Trevor and Ashton Baynes, has opened its second location in the previous home of Pearl on Union at 513 Union Avenue. Plans were set before Pearl closed that Mahalo would step into the remainder of the lease. It continues the run of high quality businesses the building has enjoyed and maintains the synergy of Union Avenue Books and an adjacent coffee shop.

I spoke to Trevor about the move and what brought the couple to this point. His story is a fascinating one. He’s from Knoxville and attended Central High School and Gibbs before leaving for Charlotte to pursue his dream of racing. He’d started with go carts at age five racing locally at Dumplin Valley Raceway and winning three world championships. By age seven he was driving in races across the country and by age twelve, he was racing cars.

At age fifteen, Chevrolet spotted him in Bristol and approached him to set meetings with racing teams. After success driving for various teams, including Dale Earnhardt, Inc, he won the 2011 Daytona 500, doing so the day after his 20th birthday. With that win, he became the youngest driver to ever win the event. It was his second start. He continued actively racing through 2018.

During these years, he’d started dating Ashton while she attended UT, though the two had met at Gibbs High School during his time there. She left for India in 2013, doing mission work there for three months and, upon her return, the couple were married in June 2013. The couple started Mahalo in 2019 as he sensed his driving career winding down.

He also raced trucks beginning in 2019, but soon realized it was difficult operating two very different businesses. With COVID restrictions in 2020, it became difficult to take his family along on the circuit, so he backed off racing to focus on the coffee business. While he says he may drive again, it is likely to be limited.

Noting the extreme contrast between the rush of racing cars and the quiet of a coffee shop, Trevor laughed. He said when he had the idea, he “expected a slow, calm pace,” but it wasn’t so. “On the first day we sold 640 coffee drinks. I worked a lot of 20 hour days for the first three months, close to 100 hour weeks.”

He said it has been that way since, with challenges on every front, running the business while working with staff recruitment and training, importing and roasting coffee. “It feels like it’s more challenging,” he said, pointing out that racing had become pretty routine for him and there was a significant amount of down time during the week.

The idea to pursue coffee as a second career had been brewing (sorry) for sometime. His crew chief, knowing what caffeine did to him (he wouldn’t stop talking on the mic during the race) forbade him to have the drink before races. He’s started brewing coffee and coffee drinks in ever-more-complex home machines and it had caught his interest.

The couple opened the first shop in Powell in July 2019 and has worked as a team since. Ashton organizes staffing and keeps the accounts, while they both do team building. He works at the company culture and coffee side. He says he’s always loved coffee and, being competitive, wants to source, roast and brew the best coffee in the city.

They are working with an importer to bring in the green coffee beans, which they roast in-house. Trevor said they have a spread-sheet generated every day showing available beans. They select only specialty grade coffees scoring 87 and up. Plans to travel to Costa Rican coffee farms with staff have been put on hold until the pandemic subsides.

They use a Loring Roaster which Trevor says is very precise and produces fewer emissions. He said it may be the only one in use in the state. They also have a food program which includes fresh pastries from Flour Head Bakery, including some gluten-free selections. They offer a bacon, egg, and cheese breakfast burrito and will be adding salads once business picks up.

He was fortunate to be able to see the success of the shop out the gate, as it was only about eight months old when the pandemic hit. He said the fact that they have a drive-through has been the single most helpful thing in helping them continue to do well over the last ten months. The downtown location is down tremendously over what Pearl did a year ago, pre-pandemic, and he knows it will take some time to come back.

Over the last year he says he feels they have really learned to do coffee well. They’ve also charted goals to be in hotels, restaurants and more. A focus for recent months has been on marketing and building business relationships. They hadn’t planned to be opening a downtown store. He said when Shaun (from Pearl) called him about the possibility, “I never saw that coming.”

Still, his vision includes growth. “As we grow, we want to do it right.. I would love to see five-to-ten shops, starting around Knoxville and then maybe moving out.” Regarding the tough business conditions at the moment he says, “We have chosen to dig in and fight hard. We went drive-in only for two months. We love people and want to engage, but we have to b e safe.”

To that end, they cut down on events they schedule for the Powell space and didn’t pursue their plans to have classes and events to educate the public about coffee. The cuppings and French press and pour over classes they had planned will be on hold until it is safer, but they are looking forward to those in the future.