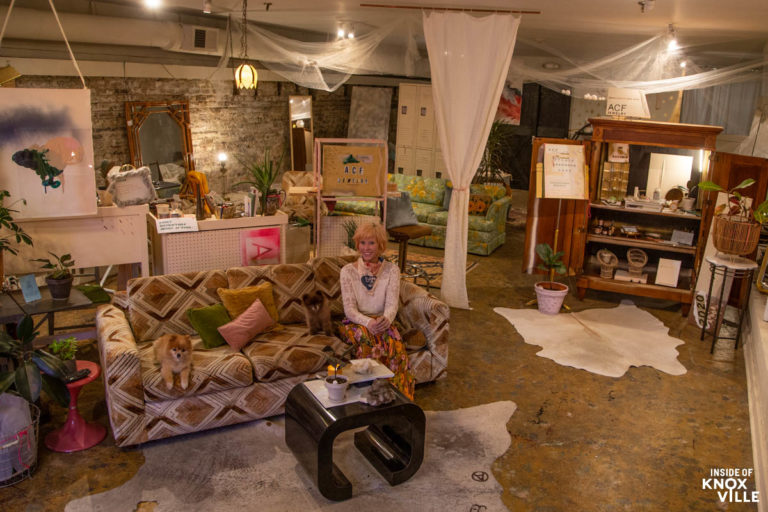 Tucked away in a charming basement in the Old City, Caroline Farris permanent space for her ACF Jewelry. Long a fixture in the area, Caroline has made the leap to full-time commitment to a location and a vocation she loves and has nurtured for years. That she’s able to do so in the Old City with its rich personal history in her family makes the move feel like coming home.

Born in Knoxville, Caroline’s father Kent was a physician and her, Susan, mother was a nurse until their respective retirements. She describes them as introducing her to the world of art as big supporters of local arts. She said they “introduced me to the bounty that Knoxville has.” They met at Vanderbilt University in the 1960s and by the time Caroline was born, there was a twenty-year gap between her and her siblings.

She describes herself as “always creative . . . doodling, sketching, dressing up,” and her first love was dance, which she did professionally as early as high school, before attending Miami of Ohio. While there she was given the opportunity to choreograph and work in production. She majored in Art History, with minors in business and metalsmithing. The business minor has given her a valuable perspective on her art as a business.

She moved to New York City in 2012, working in the fashion industry for 2 1/2 years. She said she’d traveled there often during college to dance and had become comfortable with moving about the city. She says of the experience now, that she’s glad she did it and enjoyed her time there, but ultimately missed Tennessee and realized moving upward in the industry would not lead her to positions she would enjoy. While there, she says she learned a lot, working with Cynthia Rowley from whom she says she learned a tremendous amount.

She initially moved to Nashville and worked in marketing, but Knoxville pulled her home. “I love Knoxville so much. It doesn’t try too hard and I think it is a great place to be.” She returned to work at Knox Mason, describing the restaurant business as a good fit for her constant need to be kinetic. She helped develop Emilia and eventually became the general manager. Even recently, she has continued to help design restaurant interiors and menus.

Through it all, she’d pursued her art primarily through jewelry making, founding AFC jewelry in 2012 and patenting her first design at that time. She sold her work in the West Village during her time in New York City and had a design picked up by Henri Bendel in 2018. During this period, she did trunk shows when she returned to Knoxville for holidays and once back, her jewelry was carried by Nanci Solomon at Rala. She called Nanci a “pioneer” in cultivating local talent and providing them an outlet.

Two years ago, recognizing that she’d have to focus her energy in order to make her artwork as a business, Caroline began devoting her full energy to the jewelry business. “I’m so fortunate to work a model I love.” She describes what she does as “hyper-custom, customer oriented, saying, “I get to be more about quality, not quantity.” She says it is a jewelry store, but not in the traditional sense as she operates by appointment and focuses on making pieces personalized to her customers.

Seeing three or four people a day, she says she loves “the intimacy. I love meeting people I would (otherwise) get to meet and taking care of them . . . I love that I can look around and say I have created a small community within my community. I want people to be comfortable here. It is an extension of my home.” She says this as Peter and Piper scurry about, accentuating the point.

Saying that she’ll have the façade painted soon, she’s happy to be in Knoxville’s former garment district. Her great-uncle was part of that industry in the John H. Daniel building across the street. She says her father came there to get custom-fitted suits.

One of her patented ideas that has been particularly appealing to customers for the last year-and-a-half is her “endless chain.” Saying, “I love engineering things,” she expresses her love for the design end of the business. The endless chain is a personally designed, clasp-less bracelet. After designing it with the customer’s input, the chain is soldered in place and is intended to be worn always. She describes it as “somewhere between buying a bracelet and getting a tattoo.”

She loves incorporating old jewelry into new designs, feeling jewelry becomes an both extension and expression of ourselves. She says customers return and show her pieces they’ve found. She repairs jewelry, as well, saying that recycling the metals is a very important part of sustainability. Her metal supplier allows her to have old pieces melted down to make new pieces.

She also has a selection of ready-to-wear pieces starting at $35. She’s open for appointments Tuesday through Sunday from Noon to 6:00 pm. You can see her work, leave a message or set an appointment on her website or via Instagram.