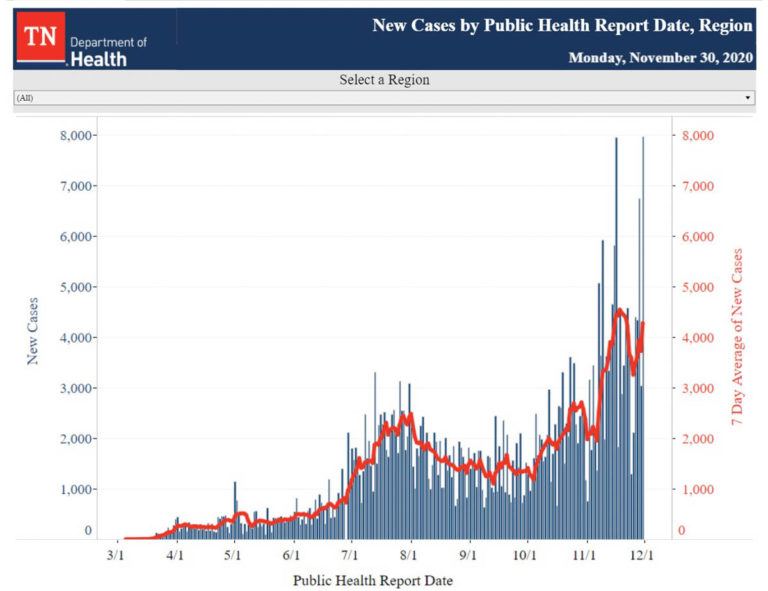 Welcome to December. It is usually a bustling, happy time of year for most of us. This year is going to be different. Even the elf in our house was found this morning dangling from a bottle of wine. Hard times call for hard measures.

Still, there is joy, and we need to seek it out. There is hope. Every day as we decide how to treat others, as we decide how carefully to follow the behaviors that will keep more of us safe for the holiday, we make the decision what kind of season this will be. Let’s make it one of great generosity, kindness and care for each other.

You could start your holiday season the right way today by participating in the local Big Give project. Last I checked, over $80,000 has been raised for 80 organizations.

The state of Tennessee reported the highest single-day number of new cases it has reported since the beginning of the pandemic, with 7,975 new cases yesterday. The number exceeded the previous high of 7,951 reported two weeks earlier. The new cases bring the pandemic totals for the state to 344,712 confirmed cases and 29,781 probable cases.

328,710 state residents are considered to have inactive cases of the virus, while 11,400 have active cases. As we begin December, the current seven-day average for cases in the state is now 4,277 new cases per day. One month ago, we began November with a daily average of 1,977.

Each number is a pandemic record. A month ago those numbers were 1,427 in the hospital, 436 in ICUs and 174 on ventilators. There are currently 263 people in the hospitals with pending test results. ICU bed availability has dropped to 9% across the state.

Reported test numbers, as you might expect given the surge in case numbers, increased dramatically yesterday to about 55.5 thousand, bringing the pandemic total to over 4.5 million. Even with the large increase, the state reports a 14.87% positive test result rate for the day. Johns Hopkins University reports a 14.2% average positive test result rate for the last seven days.

In other state news, Governor Bill Lee, while continuing to decline issuing a state-wide mask mandate, has urged Tennesseans to “double-down” on the five core actions for the holiday season. Meanwhile, Vanderbilt Hospital has temporarily suspended non-emergency procedures as they prepare for what they expect to be a surge in cases after the Thanksgiving holiday and what they fear may be a “super-surge.”

The Knox County Health Department reported its highest single day case total today with 437 new cases. It breaks the record of 373 cases set on November 17. The new cases bring the totals to 18,938 confirmed cases and 1,088 probable cases. 17,276 people are reported to have inactive cases, while the number of active cases has reached a new high of 2,578.

Following national and state trends, COVID-19 hospitalizations continue to set new records in the county. 129 COVID-positive Knox County residents are currently in the hospital, bringing the pandemic total to 593 for the county. Today marks the third consecutive day the number has set a record and the number currently in the hospital represents over 20% of the total hospitalizations from the illness for the last nine months.

In local news, County Commissioner Kyle Ward has renewed his efforts to change the Board of Health to an advisory body only. If passed, power to impose mandates or other restrictions would revert to Dr. Buchanan.

Dr. Buchanan chaired today’s meeting. She began by talking about contact tracing. She repeated the challenge the group is up against as cases expand quickly. She said they can’t surge staffing quickly enough when cases surge and lab results also slow during a surge. She shared the graphic including here showing how seven days can go by from symptoms to tracing even if everything goes well.

She said contact tracing does not work with spread at this level. She said they are revising the use of their resources going forward, particularly as they need to begin shifting staff time to administering the vaccine. At this point, she urged everyone who gets tested to isolate as soon as they experience symptoms and/or are tested and to contact their contacts as soon as they suspect they may have the virus or receive a positive test result.

She noted that the Board of Health will meet tomorrow at 5pm. She repeated the above numbers.

After missing five reporting days due to the holiday, the Knox County Schools reported a record 164 active cases in the schools as of yesterday afternoon (note: the graph does not display this most recent number, though the graphic above it is accurate). The new record follows the trend of recent days in which new records for active cases have been set almost daily. The new number includes 111 students and 53 staff members.

956 students and staff have recovered, while 2,160 are currently in isolation or quarantine. The number in quarantine or isolation includes 1,927 students and 233 staff members. This number is down from the high of 2,519 reported before the holiday.

The student attendance metric, which had been portrayed as yellow before the break, has now returned to green, while teacher attendance remains yellow. Both cafeteria staff and bus service remain green, while both custodial staff and substitute availability remain red.

Halls Elementary and Powell Middle School were changed to virtual-education only, increasing the current total to five schools not attending in-person classes: