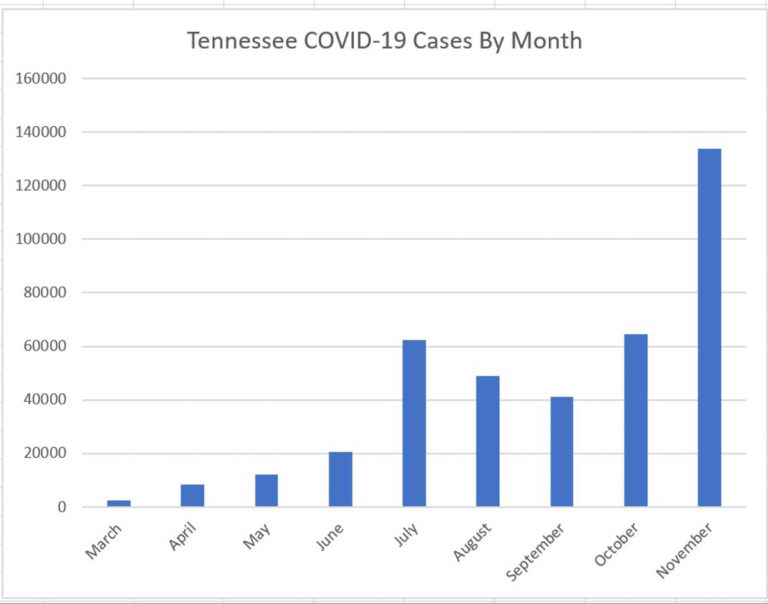 Today we’ll take our monthly look at the pandemic from a wider angle than the normal daily reports normally featured here. Backing up a bit from the daily numbers offers a different perspective. Scrutinizing the deluge of daily numbers for trends and meaning, this far into the pandemic can sometimes obscure what is more obvious from just a little distance.

There seemed to be a trend emerging last month, as cases in Tennessee rose to their highest level of the pandemic. A new high was set and a two-month trend was reversed with the large increase during the month. Further, the second half of October revealed a sharp increase over the first half of the month. Was it a quirk or a trend?

November answered that question very clearly, as the record set for cases in October was more than doubled in November. Rising from about 64.5 thousand new cases in October, the state ended November with 133.8 thousand cases, an increase of 107%.

Testing was extremely erratic through the month, meaning that day-to-day comparisons were difficult, making trends more difficult to establish. The highest test volume reported for a single day was recorded this month, with about 61.5 thousand tests. It was followed eight days later with a daily test volume of about 5.8 thousand, the lowest daily total since last spring. It’s hard to compare numbers of cases on days like those. The most troubling sign with cases is that we roughly doubled our positive test result rate, from about 7% at the beginning of the month, to over 14% at the end.

At the end of October, the state was averaging 2,369 new cases per day and by the end of November, the daily average had risen to 4,277. At the end of October, the single day record for the state was 3,606 set on October 23. That record was exceeded seventeen different days in November. As if to punctuate the trend, the final day of November set a single day record for new cases at 7,975, well more than double the record set the previous month.

Unfortunately, deaths have maintained a more-or-less steady trajectory from the beginning of the pandemic. Tennessee did not really have widespread deaths until July and the numbers have risen since. October set a record for deaths in the state, at 899 and November shattered it that record with 1,249, a 38.9% increase.

Further, almost 57% of those deaths came in the second half of the month, meaning deaths continued to escalate through the month. With hospitalizations setting almost daily records throughout the month, it seems likely that deaths will increase even further in December. While outcomes are better for those who get the illness and those who are hospitalized, the volume of patients being admitted offsets any hope for a reduction in deaths.

At the end of October, the state was averaging 36 deaths per day. After rising to almost 60 during the month, the average at the end of November was 43. A single day record was set on October 30, with 78 deaths for the day. That number was exceeded three times in November, with the record currently set at 92 on November 25.

Knox County has forged unique patterns from the beginning of the pandemic with both cases and deaths. For the first three months, cases were startlingly low, almost as if we had some sort of immunity. June seemed like a wakeup call as cases nearly doubled, from about 12 thousand to about 20 thousand. The real shock came the following month when July brought over three times the total of the month before.

From that point forward, we saw a slight decline, an increase, and then a decrease. It seemed we were stable one side or the other of 3,000 cases per month in the county. Perhaps we grew complacent, accustomed to that level of increase. When we looked at last month’s numbers, I mentioned that the second half of October produced more cases than the first and wondered if that might indicate a coming increase.

To put it mildly, it did portend a surge in November. While cases did not double in the county month-over-month, the increase was large. October produced 3,252 cases, while November would see 5,364, an increase of 64.9%. Worse yet, nearly 3,200, or almost 60% of those cases came in the second half of the month, meaning cases are still increasing.

As with cases, Knox County has displayed a unique pattern with its reported deaths. Five deaths over two months was followed by zero deaths for two months. It contradicted everything we’d been told to expect from the virus. While large numbers of people died elsewhere, we seemed to have escaped the kinds of deaths seen in larger cities.

After experiencing an increase in cases in June, but having no deaths, it seemed the charm might continue. July shattered that storyline, with 34 deaths, nearly 7 times the deaths for the four months of the pandemic that preceded it. After that shock, however, deaths dropped, and July remained our largest death total.

At one a day on our worst month, we still seemed to have avoided the worst of the virus. Deaths for the next three months settled into a range of 19 to 27. October saw a drop in deaths from September and, particularly with better treatment, it seemed we had again dodged the worst of it. The caution I gave last month was the same as with the other statistics: the second half of October produced 71% of the deaths. Deaths were increasing despite the monthly total dropping.

November was, by far, the worst month of the pandemic for Knox County, both in cases, but most importantly in deaths. The sixty-two deaths for the month nearly tripled the previous month. It nearly doubled the number of deaths in the previous record-setting month of July. And, like the previous month, most deaths occurred in the last two weeks, with 37, or 59.7% being reported on or after November 16. Deaths are increasing.

Further, we know that hospitalizations have been increasing through the month. Coming into the month, the record number of hospitalizations for the county at any one time was set on October 25, with 77 COVID-positive Knox County residents in the hospital.

Ending the month with twice the number in the hospital and rising case and death counts, it appears unlikely December will be better in any respect. A vaccine is on the way, but not in enough quantity to make an impact for several months. What happens next is up to us. The number of cases, hospitalizations, and deaths this winter will be dictated by our choices and our behavior.