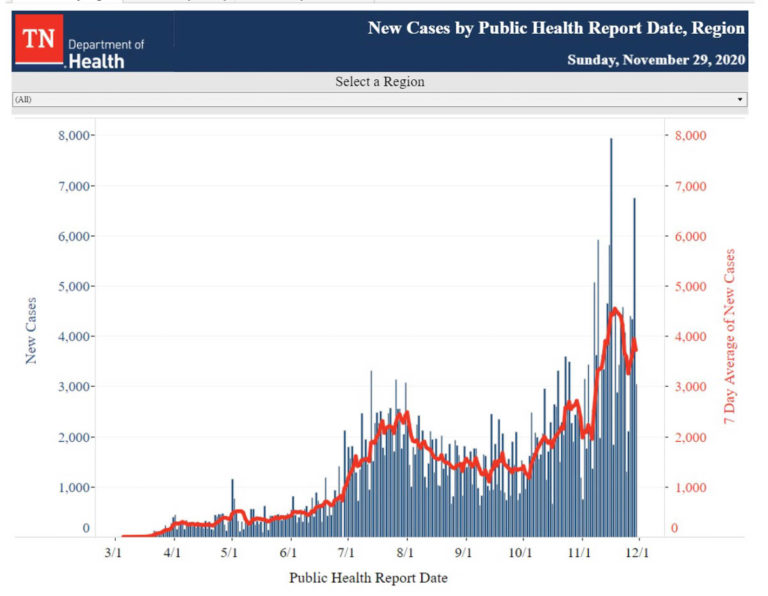 I hope you had a good long weekend, with a chance to be thankful and to express your gratitude to those you love. If you gathered with a large family group, as is many people’s Thanksgiving tradition, the Dr. Birx recommends that you get tested later this week, while Dr. Fauci suggested you quarantine and avoid vulnerable people in the meantime.

We had some of the traditional foods, while gathering in a group of seven – our household, plus Urban Daughter, Urban Son-in-Law and his mother. We sat outside, used disposable utensils and plates, and wore masks when not eating. But we saw each other, enjoyed good food and were thankful. We also solved a mystery that might be helpful in your household: Realizing the elf doesn’t have wings, and has arms that are less than optimal for climbing, Urban Boy decided Santa must slip into the house each night to move him around the household. Very logical.

As with national, state, and local data for today, the Thanksgiving holiday impacts the numbers. While Thanksgiving was not celebrated late last week in other countries, the U.S. has an out-sized proportion of cases and deaths, meaning the disruptions in testing and reporting here is enough to shape international numbers.

Unlike recent weeks, no new daily records for cases were set this week. The high for the week was just under 642,000 on Wednesday, about 20,000 below the record set November 13. Is it possible that record will stand permanently as shutdowns continue across Europe and a vaccine is drawing nearer a reality?

New highs for deaths continue to be set, with a record 12,243 deaths reported on Wednesday of last week, breaking the record of 11,747 set the day before. The global daily average for cases is 576,999 per day, down slightly from its peak of 590,319 reached last Wednesday. As deaths lag cases, the upward trend in deaths is likely to continue even if the plateau in cases proves to be real.

The wide-spread nature of the epidemic is clearly illustrated by the fact that 56 countries reported at least 1,000 new cases for the day, the same number of countries as last week. Of these, 22 are in Europe, 19 in Asia, 6 in South America and 5 in Africa.

The international focus continues to be on vaccines. Moderna will submit its request for approval in the U.S. today and reports a 94% efficacy rate, no severe side effects and a 100% prevention rate for serious illnesses. It should be available to about 10 million people in the U.S. by the end of the year. Other lesser known companies like CureVac in Germany are also nearing distribution, though at smaller numbers, projecting 100 to 300 million doses for 2021.

In further contrasts to the U.S., Hong Kong has imposed stricter measures in response to 76 new cases among its population of about 7.5 million. They have closed karaoke centers, limited gyms to 2 people at a time, closed restaurants and bars at 10 pm and limited seating at restaurants to 2 people per table. We’ve learned a large amount during the pandemic and here’s a look at what has worked in various countries (hint: massive testing and contact tracing – like Slovakia, which tested its entire population of about 4 million over 2 weekends).

Almost 13.8 million Americans have been diagnosed with COVID-19 since the beginning of the pandemic, up about 1.2 million from last week, the same increase as the week before. About 8.1 million of those cases are considered inactive and about 5.4 million cases remain active, up by about 600,000 over the same day last week. Just over 273,000 Americans have died of the illness, an increase of about 10,000 from the previous week.

The U.S., as it has for months, continues to far out-pace any other country in both cases (13.8 million to India’s 9.4 million) and deaths (273K to Brazil’s 173K), even with the likely artificially reduced numbers from the past week’s holiday. Both gaps have grown wider over the last week. Cases in the country are now averaging 163,649 per day, down from about 175.1 k a week earlier.

The current daily average for deaths 1,481, down from 1,548 a week earlier. The decrease is likely due to a decrease in reporting over the holidays. 2,332 deaths were reported last Wednesday, the highest daily total since May 6 when 2,582 deaths were registered. Based on soaring hospitalization rates in recent days, some health experts are suggesting daily deaths could reach 4,000 per day by the end of December. Only two states (Texas and Minnesota) were the same from a week earlier among the top states for deaths reported yesterday. The top states for the day were Pennsylvania (65), Florida (59), Minnesota (57), Texas (54), and Massachusetts (46).

Health Secretary Alex Azar said today that two vaccines may begin administration in the U.S. before Christmas. If both Moderna and Pfizer get approvals for their vaccines, as many as 75 million people in the U.S. could be vaccinated by the end of March according to Dr. Larry Corey who is coordinating U.S. vaccine trials. In the continuing whip-lash saga of school openings and closings, New York City has reversed course and will reopen schools in phases over coming days. This comes as the city abandons their previous criteria of 3% positive test rates. The rate in New York City is currently 3.9%.

The U.S. COVID-19 hospitalization numbers set a new record yesterday with 93,238, eclipsing the previous record of 91,635 set the day before.

For the duration of the pandemic, the state reports 337,175 confirmed cases and 29,343 probable cases. 325,993 people are considered to have inactive cases, and 6,628 have active cases of the virus. Over 16,000 cases were considered active a week ago and with 26,000 new cases reported this week, it seems odd it has dropped so precipitously.

If we were given same-day results, it would be impossible, as all of the 26,000 from the week would still be active. I can only guess that many of the results being reported are so delayed that by the time the case is reported, the patients are near the 10-day window for recovery. If we are that far behind, it likely means 10s of thousands of people are currently positive in the state and have yet to get a positive test.

Thirty-five additional deaths were reported since the last article: 7 on Friday, 15 on Saturday and 13 on Sunday. Given that the numbers are dramatically lower than previous days, I suspect there were coroner’s offices around the state that did not report on the holiday weekend. As a result of the lower numbers, the seven-day average for deaths has fallen to 41 per day down from 53 per day a week ago. Total deaths in the state are now 4,554.

Thirty-five additional COVID-positive Tennesseans were admitted to the hospital yesterday, bringing the pandemic total to 12,040. For Saturday, the state reported 2,199 current hospitalizations for the illness, near the record high of 2,237 reported the day before. Of these, 582 are in ICUs and 279 are on ventilators, also both second only to the previous day. The number hospitalized continues to run just short of twice what it was a month earlier. ICU beds continue to the be closest to capacity, with 11% availability.

Numbers of tests reported have ranged from relatively high totals for Friday (34.9K) and Saturday (43.7K), to a lower number on Sunday (18.7K). If tests are reporting a week after administration, we may see low numbers later in the week due to gaps at the end of last week. The state reported a 16% positive test result rate for yesterday, while Johns Hopkins University is reporting a 14.2% seven-day average for the state.

In the three days since the last article, the Knox County Health Department reported 288 new cases on Saturday, 282 on Sunday and 148 today. Saturday and Sunday were the fourth and fifth highest daily totals of the pandemic. All five have come in the last two weeks. The new cases bring the county totals to 18,501 confirmed cases and 1,078 probable cases.

Hospital totals for COVID-positive Knox County residents set records yesterday (125) and today (126). The total hospitalized since the beginning of the pandemic is now 593. As with the state numbers, the number hospitalized now is nearly double the number a month ago (67).

Two additional COVID-19 deaths among Knox County residents were reported Saturday, with another Sunday and four today. One person was between 18 and 44, two were between 64 and 75 and four were over 75. Knox County has now recorded 167 deaths from COVID-19 since the beginning of the pandemic. A third of those deaths came this month.

The state is reporting a 15.5% positive test rate for the county.

I’ll wait until publication of this afternoon’s data to return to updates for the Knox County Schools.