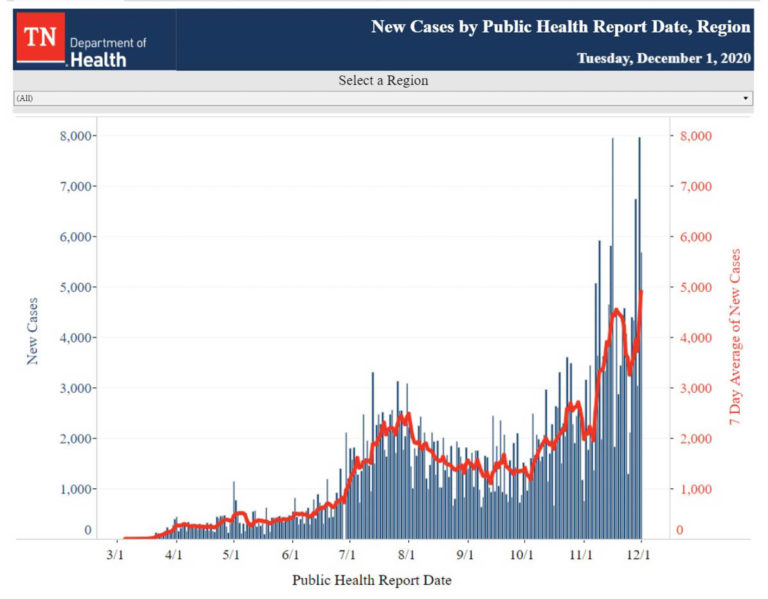 It’s mid-week and, while there is plenty of virus news to get to, let’s remind ourselves what is right outside our doors. A beautiful late fall day is practically begging for us to get outside, soak up some vitamin D, and enjoy the crisp air. We got enough flakes earlier this week to enjoy the sight of them floating downward around the city and now we have the sunshine. Enjoy while you can. Don’t forget to take breaks from the news. Ignore me for a few days if you need to! I’ll be here when you get back.

It’s worth noting before we get into today’s numbers that the White House Task Force in their weekly statement, issued some of their strongest language to date. According to the group:

We are in a very dangerous place due to the current, extremely high COVID baseline and limited hospital capacity; a further post-Thanksgiving surge will compromise COVID patient care, as well as medical care overall . . .

If state and local policies do not reflect the seriousness of the current situation, all public health officials must alert the state population directly . . .

It must be made clear that if you are over 65 or have significant health conditions, you should not enter any indoor public spaces where anyone is unmasked due to the immediate risk to your health; you should have groceries and medications delivered . . .

If you are under 40, you need to assume you became infected during the Thanksgiving period if you gathered beyond your immediate household. Most likely, you will not have symptoms; however, you are dangerous to others and you must isolate away from anyone at increased risk for severe disease and get tested immediately.

The state of Tennessee reported 5,693 new cases yesterday, bringing the case totals to 349,543 confirmed and 30,643 probable cases. 336,131 state residents are now considered to have inactive cases, while 8,774 are considered active. With over 13,000 new cases announced in just the last two days, it is illogical that there could be fewer than 9,000 active cases. Perhaps I’m figuring the number incorrectly? It is possible I should use the combined active and probable cases, which would change the number significantly, though it doesn’t seem likely that probable cases are being included in the active numbers.

The only explanation I can determine is that many cases are being placed directly into the inactive case numbers because the results come after the entire active period has expired. If this is true, we are in deeper trouble than the numbers can tell us. It means those people potentially spent their entire active period without a positive test. It means the waves of positive cases following them are currently spreading the virus.

I’ve asked the Health Department for an explanation. Local numbers do not seem to have the same disconnect.

Thirty-six additional deaths were reported from the virus, bringing the pandemic total to 4,638 Tennesseans who have died of the illness. The state is averaging 37 deaths per day, which is down sharply from the high of 59 reached on November 25. Initially it seemed the drop might simply be a reporting issue due to the holidays, but it seems that would have cleared by now. It’s worth watching and hoping that it marks some kind of sustained drop.

113 COVID-positive Tennesseans were admitted to the hospital yesterday, the first time I recall the daily number crossing 100. The pandemic total for hospitalizations is now 12,209. As of Sunday (the most recent day with updated numbers), 2,377 COVID-positive Tennesseans are in the hospital. As with most recent days, it represents a new high number. Of these, 608 are in ICUs and 305 are on ventilators. A month ago the numbers were 1461 hospitalized, 415 in ICUs and 172 on ventilators.

ICU capacity is the tightest it has been since I’ve monitored it, at 8% availability. Hospital beds are also becoming tighter at 13% availability. With numbers this tight on average across the state, it is only logical that there must be some area hospitals at or over capacity.

The state reported test results for just under 36,000 tests yesterday, bringing the total to just over 4.55 million over the last nine months. The thirty-six thousand tests is a high-average number for recent test reports. The state noted a 15.17% positive test rate for the day. For the third consecutive day, Johns Hopkins is reporting a 14.2% positive test rate for the state.

After reporting the highest single-day number of daily cases for the county yesterday at 437, the Knox County Health Department reported 377 new cases today, second only to yesterday since the beginning of the pandemic. This brings the cases totals for the county to 19,315 confirmed cases and 1,106 probable cases. 17,645 people are considered to have inactive cases, while 2,597, a new high, remain active.

The health department also reported seven additional deaths today, tying the daily record set on November 17. There have been 26 deaths in the county in the last seven days, which is more than the entire month of October and one shy of September. Of the seven deaths reported today, 1 was a person between 45 and 64 and six were over 75 years old.

Knox County Benchmarks were updated today and for the first time, each and every one is red. Cases and Testing remained red from last week. Public Health Capability and Hospital Capacity were each rated red for the first time. Deaths remained in the red zone.

As a part of the benchmark update, the positive test result rate was updated to reflect a seven-day average rate of 20.17%.

The Knox County School System is reporting a record 186 active cases of COVID-19, including 124 students and 62 staff members. The number is an increase of 22 over yesterday’s record number.

983 students and staff have recovered from the illness and the second highest total of,  2,486 students (2,162) and staff (264) are in quarantine or isolation. The high remains 2,519 registered just prior to Thanksgiving break.

All metrics remain the same as yesterday: Student attendance is green, teacher attendance is yellow, bus and cafeteria support are each green, and custodial and substitute availability remain red.