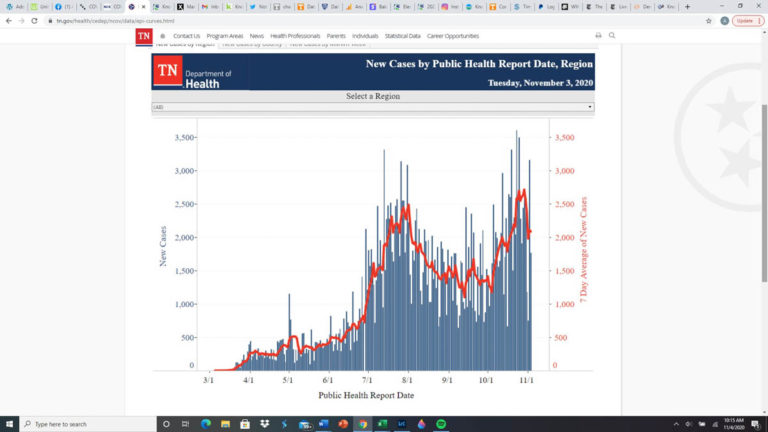 Good afternoon. Incredibly, a raging pandemic isn’t the primary topic of conversation across the country this morning. That would be the election, of course. I didn’t get everything I wanted and, I suspect, not many of us did. Clearly, we are an extremely divided nation, and the lines are hard. On the great side, a greater percentage of Americans voted than at any time since 1900.

Further, there were no significant reports of violence, intimidation, or fraud. If we can see this thing through the vote and any transfer of power that may come with it, we can be proud. Maybe then we can find a way to come together in ways that have recently eluded us.

Tennessee state reporting appears to have recovered from the glitches over the weekend. We’ll see some impact through next weekend in average but, on whole, we appear to have returned to the previous patterns, with fluctuations in testing and cases, and increasing hospitalizations and deaths.

The state reported 1,770 new cases of COVID-19 yesterday, bringing the totals since the beginning of the pandemic to 250,991 confirmed cases and 15,366 probable cases. 237,736 cases are inactive and 9,801 people currently have active cases of the illness. The seven-day average for new cases in the state is 2,084 per day.

There were 75 additional deaths reported in the state, second only to October 30 (79), for the highest single-day death total in the state since the beginning of the pandemic. A total of 3,454 deaths in the state have been attributed to COVID-19. The current seven-day average is 36 deaths per day.

67 additional hospitalizations for COVID-19 were reported yesterday, bringing the state’s pandemic total to 10,407 since the beginning of the pandemic. The updated numbers for November 2, the most recent day with solid numbers, indicates record numbers of COVID-positive Tennesseans are currently in the hospital, ICU and connected to ventilators. 1,480 are in the hospital and, of these, 455 are in ICUs and 196 are on ventilators.

Reported tests plummeted to the low-end of the range we’ve seen recently, with about 40% of the previous day’s totals at 13,772 tests processed for the day. The state reported a very concerning 13.52% positive test result from the tests. Unfortunately, Johns Hopkins has not updated their Tennessee graph for the day, so there is no updated 7-day average available.

The Knox County Health Department reported 118 new cases today, bringing the pandemic totals to 13,599 confirmed cases and 687 probable cases. Of these, 12,853 are considered inactive and 1,284 are active. The number of active cases has declined recently, though they remain high relative to the longer term.

There were no additional deaths reported today, leaving that number at 109 for the county. The state website is reporting an 11.3% positive test rate for Knox County. The White House Task Force has now placed Knox County at the top of the list of red zones in the state of Tennessee.

Benchmarks were updated, but unchanged from last week: Cases, Testing, Hospital Capacity and Deaths were all rated yellow, while public health capacity was rated green. The county reported a slightly higher positive test rate of 11.77%.

The University of Tennessee is reporting 58 active cases among students and staff, a number in line with numbers reported for the last month. 1,762 students and staff are considered recovered. Six additional positive cases were identified yesterday.

There are currently 328 students and staff in isolation or quarantine, the highest that number has been in two weeks, though well below numbers seen earlier in the semester. Of these, 55 are employees of the university and 273 are students. No additional clusters have been reported and testing at the Student Health Center has remained steady at about 150 tests per week. In the most recent week reported, about 15% were positive.

Active cases have remained higher after fall break than before and continue to increase slowly in the Knox County Schools. The system is currently reporting 75 active cases, up from 70 the day before. Of these, 55 are students and 20 are staff members. 569 students and staff have recovered.

Isolations and quarantines continue to be the larger hurdle, as they are currently at their highest level since the beginning of the school year. 143 staff members and 1,160 students, for a total of 1,303 are currently in isolation or quarantine. The number is up 35 from the previous day.

All measured metrics remain the same as yesterday, except for substitute availability which has, once more, dipped into the red level. South Knoxville Elementary School remains the only school on completely virtual learning.