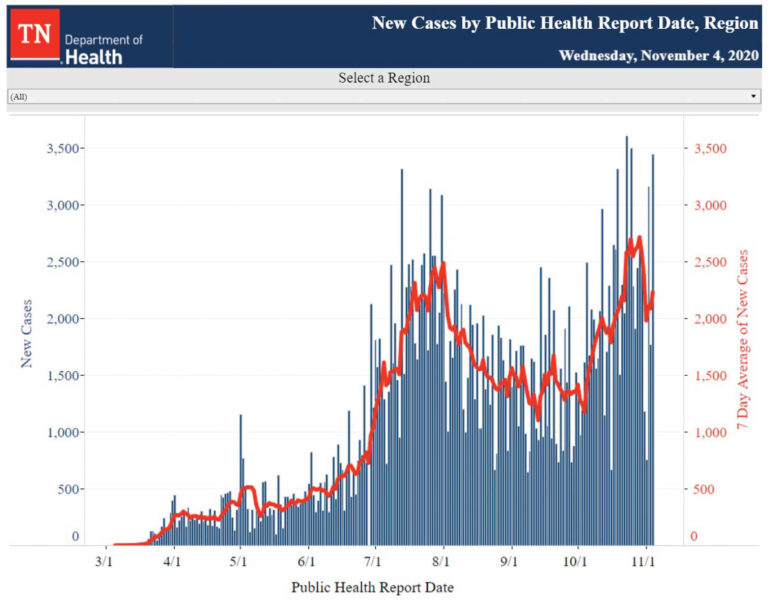 Well, a weird year just won’t quit, right? This appears to be as close a presidential election as we’ve ever seen as far as individual states deciding the electoral college are concerned. I know we’re all watching it and anxiety is high. That said, it is important not to behave as if this is the only story. There is also a virus afoot and it is rampaging across the country as we watch the vote counts. It has not slowed down and is, in fact setting records not seen in this country or any other since the beginning of the pandemic.

The state of Tennessee reported 3,445 new cases of COVID-19 yesterday. Totals have now reached 254,058 confirmed cases, and 15,744 probable cases. 240,587 people now are considered to have inactive and 9,993 people currently have active cases. The total is the third highest single-day total for Tennessee since the beginning of the pandemic.

In an indication of how widespread the new cases are, this number only ranked 10th in the country for yesterday, whereas a few weeks ago it might have ranked at the top. The current daily average in the state is 2,226 per day.

24 additional deaths from the virus were reported bringing the total to 3,478 Tennesseans who have died of the illness since the beginning of the pandemic. The state is averaging 33 deaths per day.

77 additional COVID-positive Tennesseans were hospitalized yesterday, bringing the pandemic total to 10,484 hospitalized. Based on data from 11/3 (the most recent updated data), the state continues to set records with COVID-positive hospitalizations, ICU and ventilated patients. The current numbers are 1,548 hospitalized, 461 in ICUs and 203 on ventilators. As a reference, a week earlier, the numbers were 1370, 409, and 182. A month earlier, they were 862 hospitalized, 270 in ICUs, and 131 on ventilators. Statewide capacity does not seem to be an issue at this time.

The Knox County Health Department is reporting 182 new COVID-19 cases today, the fifth highest daily total of the pandemic for the county. The case totals for the county are now 13,741 confirmed cases and 698 probable cases. Of these, 12,881 are considered inactive and 1,447 are currently active.

For the day, there are 69 COVID-positive Knox County residents in the hospital, a number close to the high number for the pandemic and in the elevated range where it has stayed in recent week. The total hospitalized since the beginning of the pandemic in the county has now reached 491.

Dr. Buchanan opened the meeting by recommending that families get outside while the weather is good. She is suggesting virtual cooking lessons to share family recipes with family members you may not be able to see in person. She urged people to get a flu shot. She noted that the Board of Health will meet this TUESDAY night. She confirmed the above numbers.

She reviewed the benchmarks, which I covered yesterday. All are yellow, except for public health capacity, which is green. She noted that the hospitals called their rating a “stable yellow,” meaning it is cause for concern, but is stable at this time.

The University of Tennessee is reporting 65 active cases among students and staff, which is in line with recent numbers. 1,770 in the university community have recovered. 8 new cases were reported for the day. There are 54 employees and 291 students in quarantine or isolation, the highest that number has been since September 26.

The Knox County School System is reporting 74 active cases, including 51 students and 23 staff members. The number is down one from yesterday but remains on the high end of the spectrum for the year. 578 students and staff have recovered from the illness.