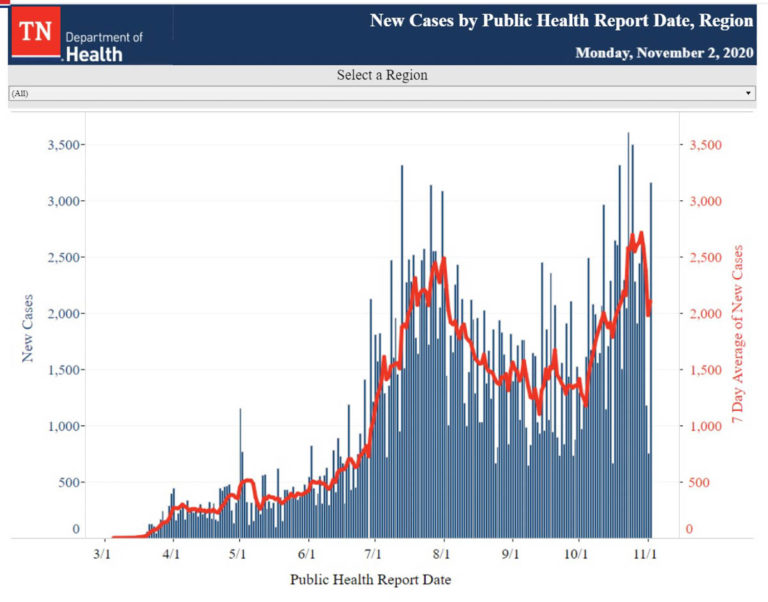 It’s a beautiful day for casting a ballot! Do so if you haven’t already. It’s ok to raise your hand if you are tired of me saying that. After today it will be out of our hands. Here’s hoping it is settled quickly.

I think there are still a few glitches in the data which will likely take a few days to work out. Some of the data reported here (from late yesterday) appears to be a combination of data from more than one day. It’s hard to say as, for example, reported testing was far higher than the most recent days, but not has high as a dozen or so other days going back. I’ll report the numbers as they appear and, hopefully, the data will settle further from here.

26 deaths were reported yesterday, which likely was a combination of more than one day. The total who have died of the illness in the state has now reached 3,379. While the glitches may still be impacting averages for the next several days, the current seven-day average of deaths is 31 per day.

Hospitalizations are still notably incorrect. New admissions have not been updated and continue to be listed as 1 for the day. The census numbers do seem to be updating. As a reminder, I have decided to report the number from two days before give time for the inevitable adjustments that happen after the initial number is produced. By that number, there are 1,435 COVID-positive Tennesseans in hospitals across the state, more than at any previous point. Of these, 434 are in ICUs and 194 are on ventilators, each number close to or over previous highs.

The number of tests reported rocketed upward. After two days around the 10,000 mark, the state reported over 37,000 new tests, bringing the pandemic total to over 3.7 million tests given. On that group of tests, the state reported an 8.44% positive test rate. Johns Hopkins is reporting a seven-day average positive rate for state testing at 9.7%.

64 COVID-positive Knox County residents are currently hospitalized, a number consistent with the last four weeks, though off its peak of a couple of weeks ago. 475 COVID-related hospitalizations have been recorded for county residents since the beginning of the pandemic. Two additional deaths were reported today. The four reported in the last two days were all among people over 75 years old.

According to the state website, the positive test percentage for Knox County has averaged 10.6% over the last seven days.

Charity Menefee chaired today’s meeting and began by expressing thanks to all who voted and all who worked to allow them to vote. She confirmed the above numbers.

The University of Tennessee is reporting 60 active cases, including 55 students and 5 staff members. 1,750 students and staff have recovered, and 5 new cases were reported. 309 are in quarantine or isolation, including 35 employees and 274 students.

There are no new clusters.

The Knox County School System is reporting 70 active cases, including 24 staff and 46 students. Post-Fall Break numbers continue to run higher for active cases than those prior to the break. 558 students and staff now have inactive cases.

The number in quarantine or isolation is the primary current concern, with the numbers higher now than at any point during the pandemic. 147 staff members and 1,121 students, for a total of 1,268 are currently in quarantine or isolation. These numbers, which started out much lower after break, have surpassed pre-break numbers over the last week, leading to today’s record number.

Even with the higher isolation and quarantine numbers, metrics for teacher and student attendance throughout the system remains in the green rating, as does cafeteria staff attendance. Metrics for custodial staff and substitutes are currently given a yellow rating.