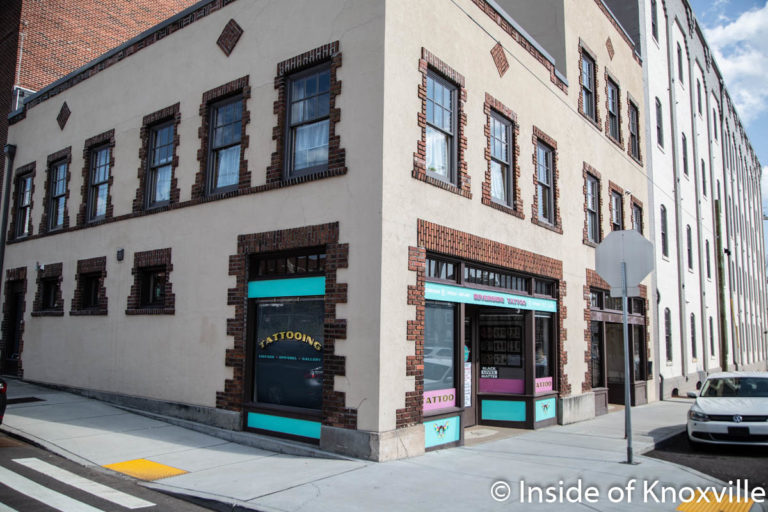 Riverside Tattoo Company slipped into the Old City just a few weeks before COVID-19 shut the city down. Its warm and friendly vibe was put on hold for a while, but now there are back, within limits, of course, and operating out of the lovely building on the southeast corner of Central and Depot. I stopped in to see what was going on in this no-longer-new business to catch up a bit.

I spoke with Nick Moran, owner, and one of the working artists. He said he opened the business January 10. It’s his second shop and the fourth location. It moved here from Newport, Tennessee, where it was located near the French Broad River. He originally opened a business in 2012 in Morristown before switching to Newport and later moving to Boston.

Interestingly, he had wanted to make the move to Knoxville for some time, but waited for the passage of Recode Knoxville before making the move because tattoo parlors were not legal downtown prior to its passage. (Yes, I know there was at least one operating previously, but it was apparently technically against code.) Jeffrey Nash directed him to Mark Heinz, who suggested the space from which they now work. He said the space was entirely too big – until they opened and it wasn’t. He now senses they could use more space.

Nick was born in Knoxville, but with parents in the Air Force and then climbing the corporate ladder, they lived a lot of places, though mostly in east Tennessee as he was growing up. Originally wanting to be a rock star, he toured bringing in $10 to $15 a day and met musicians who did a side gig offering tattoos. He tried it and fell in love with the art, apprenticing from 2010 to 2012 before opening his first shop.

In 2017, east Tennessee called, and he returned, moving the Newport business to Knoxville in 2020 He missed a larger downtown and its amenities.

He loves the energy of old places and the authenticity of being in an organic and authentic space. The Old City felt perfect and he feels that many of his potential customers live there and in nearby areas. He started in January with three artists. Each of them brought their own clientele and business was steady. Just as they were working on their windows and becoming more visible, the quarantine hit.

They were closed for 40 days and continued work on the space. Knox County was one of the first to allow tattoo parlors to reopen and Nick said he’d always operated a very safe practice, so the new procedures didn’t really change much. His artists have worn masks at times, anyway, so it didn’t seem like much of a change. It has limited the number of people they can have in the business at any one time.

That said, since reopening, demand has been extremely high for tattoos. Where he used to stay booked two weeks in advance, he and two of the other artists are now booked through the end of the year. He says there have been large numbers of new clients, which he speculates may be because they have more time, or money from the stimulus, but says there are probably multiple factors.

He’s looking forward to becoming more connected to his new community when the worst of the pandemic is past. He’s joining the Chamber of Commerce and plans to participate in and sponsor events. They’ve already donated to one fundraiser (a day’s profits) for Nashville tornado victims and they plan to do more as other causes “touch our hearts.”

There’s also a small merchandise shop inside the business which includes tshirts with vintage tattoo designs. They also have a project in which Beth Meadows and other artists paint plywood cutouts of those vintage tattoos and the resulting items are sold in the store for the artists. You can learn more about the Plucky Panther project here.

He’s been joined by eight other artists, all of whom were chosen not only for their skill, but for their common desire to be Knoxville’s friendliest tattoo parlor. The goal is to do excellent work and never have a complaint. Saying they will work to ameliorate any discomfort and accommodate any needs, even the space was designed to be open and airy. They offer food and drink and they have sunglasses on hand for clients who are sometimes lying on their backs looking up into the lights.

If you’d like to learn more about Riverside Tattoo Company, you’ll find them on Facebook, on their website and on Instagram. You can view samples of their work and get links to each artist through Instagram. It’s the format that Nick says gets by far the most traction for the business.