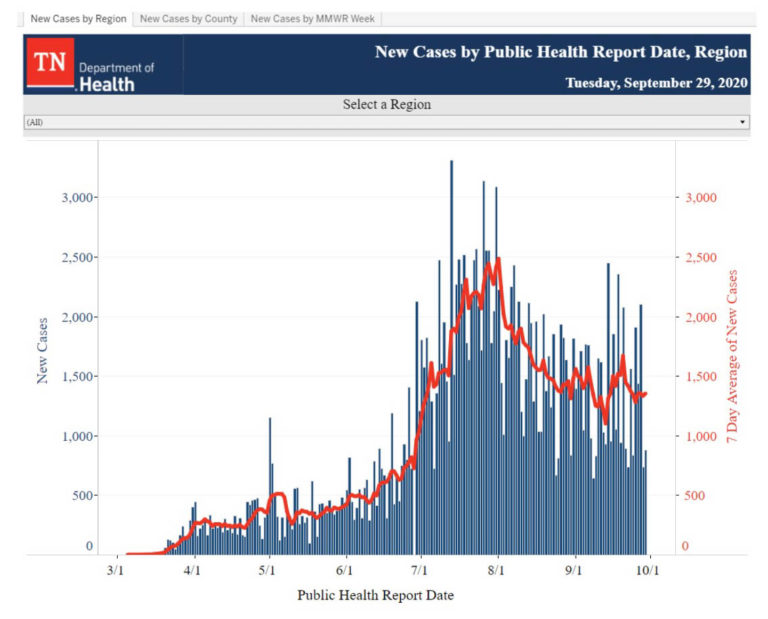 We’ve made it to Wednesday! The rain has stopped, we’ve reached the best part of the first presidential debate, and the air is slightly crisp. After tonight’s Board of Health meeting, I’m going to feel pretty good about looking toward the weekend. Check out the meeting, if you like, at 5:00 pm on CTV (or their website) or the Knox County Youtube Channel.

The state of Tennessee reported 879 additional cases of COVID-19 yesterday, bringing the total to 187,197 confirmed cases, and an additional 7,414 probable cases. 177,945 people have recovered and 9,252 people remain ill. 31 Tennesseans died yesterday of COVID-19, bringing the pandemic total to 2,420.

53 additional Tennesseans were hospitalized yesterday, bringing the pandemic total hospitalized to 8,672. Hospitalizations, which have trended downward significantly in recent weeks have, at least for the moment reversed course. The 806 COVID-positive Tennesseans currently hospitalized is roughly equivalent to the number on September 17. Of these, 253 are currently in ICU and 116 are on ventilators. These numbers have slowly declined over recent weeks and have yet to show a significant reversal.

For a second consecutive day, reported testing was at a low level, with 12,958 tests reported, moving the state total to near 2.9 million since the begging of the pandemic. For the day, the state reported a 7.43% positive test result rate, while Johns Hopkins reports a 5.6% seven-day moving average positive rate for the state.

The other big news in the state yesterday, was action by Governor Lee who extended the state of emergency through October, but removed most restrictions on gatherings. Restrictions were also eased, but not removed, on senior centers and nursing homes. The governor’s office said the previous restrictions are still a good idea, but are now recommendations. They encouraged people to continue wearing masks and keeping social distance.

Benchmarks, which are updated on Wednesdays, have not been updated as of the time of the publication of this article. They should be updated later today and discussed at tonight’s Board of Health meeting.

The University of Tennessee continues to report significantly lower number than was the case two weeks ago. There are now a very modest 75 cases reported among the university community, including 72 students and 3 staff. There were 8 new cases reported today and 1,420 students and staff have recovered from the illness.

There are currently 313 in isolation, as compared to well over 2,000 just more than two weeks ago. Of those currently in isolation, 37 are university employees and 276 are students. No clusters have been identified within the last two weeks. Follow up testing is underway for the pooled testing groups which came back positive, so new information should be forth-coming very soon and the number will almost certainly increase, but the amount of the increase will be interesting to follow.

The Knox County Schools are reporting 61 active cases, including 20 staff and 41 students. The number is down 4 from yesterday, but up from 44 the same day last week. 268 are reported to have recovered, while 1,002 are in isolation or quarantine. Of the 1002, 890 are students and 112 are staff. The number in quarantine or isolation has dropped by 26 from yesterday, but is up slightly from the 979 reported the same day last week.

Benchmarks remain the same, with most indicators in the green, but custodial attendance and substitute availability remaining in the red. Both Halls High School and Vine Middle Magnet School are currently on virtual-only instruction.