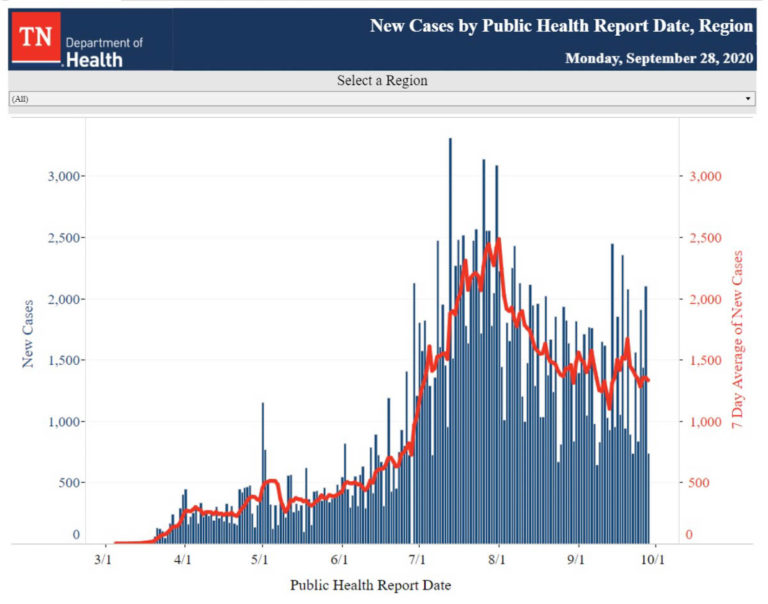 Happy National Coffee Day. I’m not sure how I’m going to celebrate since I pretty much drink coffee every day all day. Maybe I’ll savor it just a little more. It’s probably not good for me to drink so much coffee, but then, at least I’ve resisted adding morning whiskey, so that’s something. Drink coffee responsibly, Knoxville. But drink what you need to get through the days and hours. Some of them are long.

Yesterday, the state of Tennessee reported 737 new confirmed cases of COVID-19 and 12 deaths from the illness. The total for cases is now 186,499 confirmed cases and 7,233 probable cases. 2,389 Tennesseans have died of the illness and 176,030 cases are considered inactive. 8,080 residents of the state remain ill.

42 additional people were hospitalized yesterday, bringing the pandemic total to 8,619. Hospitalizations, which have trended significantly downward for the last six weeks, have increased overall the last several days. There are currently 795 COVID-positive Tennesseans in state hospitals, 251 of those are in ICU and 101 are on ventilators.

Reported tests, as anyone who follows the case and testing numbers would expect, dropped dramatically, yesterday. Almost 43,000 tests were reported the day before, followed by about 15,000 today. It explains the dramatic drop in cases from one day to the next and, likely, is a macro explanation for the same up-and-down pattern we see at the county level. The state reported a 5.42% positive test rate for the day and Johns Hopkins University is reporting a 5.6% seven-day average of positive tests.

Like the state, Knox County is reporting a sharp day-over-day drop in cases, from 111 yesterday to 51 today. The 51 new cases brings the pandemic total to 9,828 confirmed cases and 427 probable cases. Of these, 8,592 are considered inactive, while 1,530 are currently active. There are currently 38 COVID-positive Knox County residents in the hospital and 369 have been hospitalized since the beginning of the pandemic. There are no new deaths reported today, leaving that total at 83.

In other local news, the Knox County Commission took up their resolutions last night after literally hours of public forum (the meeting lasted over 8 hours). Ultimately, the group passed a resolution simply stating that they recommend reducing the power of the Board of Health, a resolution which a council member noted, does nothing. The group recognized over the last week that they have no power over a group created by state law.

They do, however, have the authority, granted by the state statute creating the board, to name a community representative to the board and they did so, naming Ani Roma to the post. Of the two dozen or so self-nominated citizens, only eight remained in the City County Building when the item came up for discussion close to midnight. Despite previous indications they would do so, no commission members proposed additional names. After three quick ballots, Ani Roma was named the community representative. Her winning two minute speech (lightly edited):

I am employee of Knox County Schools, work full time as a health educator and I have Masters degree in Educational Leadership. I’m also a local small business owner, producing events (Dirty Bird Events). In addition to these two occupations, I regularly volunteer in a variety of ways throughout the community. My children attend school in Knox County. I represent a variety of areas of our community, as a local business owner, an educator, a parent and a community volunteer. I worked for nine years in Fountain City, was a coach for youth sports and I helped break ground on the first adaptive trail system on Sharps Ridge. I routinely frequent south Knoxville where I am a member of the Appalachian Mountain Bike Club and a frequent trail user. I want you to know that I am dedicated to the long-term wellness of our community, not just during the pandemic.

Charity Menefee chaired the meeting and Dr. Grey, representing local hospitals, joined her. She talked about visiting local parks as a great opportunity to maintain distance and get some exercise while enjoying the fall air and staying safe. Testing continues at the main location of the Health Department on Dameron Avenue.

Dr. Grey noted that he had been in the conference two months ago. He acknowledged that there has been a deluge of data and it often conflicts. He expressed appreciation for the collaboration of local medical providers. He said the Health Department is to be thanked for spearheading the efforts and that the work during this pandemic will result in better systems when facing future challenges. He noted he has sent all five of his children back to school.

He said the pandemic, thus far, peaked in late July and early August and hospitals did about the same. Hospitalizations have now increased slightly, which he attributed to Labor Day infections. He said the number of COVID-19 patients are manageable, but the hospitals are very busy. He said restrictions are still in place for visitors at the hospitals. He urged early flu vaccines and continued efforts to fight COVID-19. He asked for kindness across the community.

The University of Tennessee continues to report diminishing numbers of active and new cases. There are currently 73 confirmed active cases among the UT community, including 69 students and 4 staff. 1,408 people have recovered. New cases are now running in the single digits each day, including 6 yesterday. 298 are currently in isolation or quarantine, including 35 employees and 263 students. No additional clusters have been identified.

Dr. Plowman began by noting that students are required to get flu shots and that Massey Hall has now been opened for quarantine or isolation. This marks a week of pooled testing. She noted to the downward slope in new and active cases. Dr. Crawford, Vice-Chancellor for Research said they collected and tested 574 samples and tested them in groups of five. 21 samples were referred for follow up. About 20% have not been processed. This is a lower rate than that found in Massey Hall.

Dr. Crawford pointed out this indicates a number of students who have the virus are not symptomatic and the concern is that they will spread the illness to vulnerable friends and family. Positive test numbers will only come from the follow up testing.

There does seem to be an emerging pattern with Knox County Schools reporting. It appears that active cases, isolations and quarantines rotate off over the weekend, but no new cases are added, leaving a drop from Friday to Sunday and increasing numbers through the week. The best comparison, especially on Monday is the same day a week earlier, so I’ll try to be sure to give that context each time. Additionally, the bar graphs don’t always seem stable, so I’ll use the numbers I’ve previously reported.

As of yesterday afternoon, Knox County Schools are reporting 65 active cases, including 46 students and 19 staff members. This reflects a 30% increase from yesterday’s total of 50 and about 45% over last week’s 45. 257 students and staff have recovered.

There are currently 1,028 in quarantine or isolation, including 921 students and 107 staff members. The 1,028 is up from 885 yesterday and 975 last week. Benchmarks for both Cafeteria attendance and substitute availability remain in the red category. Vine Middle School has been switched to virtual learning until October 7, joining Halls High School, which is on virtual learning until October 5.