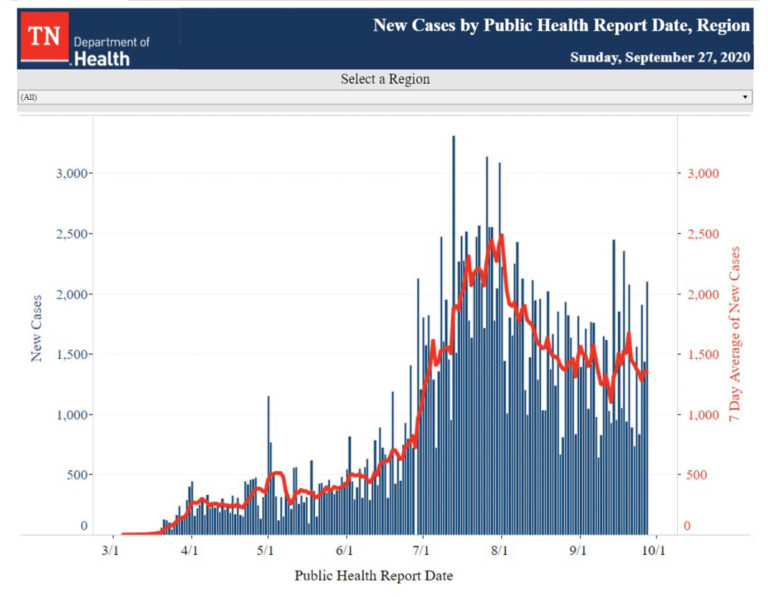 I hope you all had a great first weekend of fall. I hope all your teams won and you were able to chill. Mostly, I hope you were able to get away from the news and lower the stress a bit. It’s important. That and staying well. Please stay well.

Yesterday, 251.9 thousand new cases were reported, along with about 3,900 deaths. The rate of both has remained remarkably stable, with the cases reported up about 3,000 since the same day last week and deaths almost identical. Two weeks ago also had just fewer cases than last week and the same number of deaths. This week, as was the case last week, there were three days with more than 300,000 case added.

Average cases per day now sit at 283,643 and was at the same level last week, though the chart reflects a slightly higher number (290,000). The reason for the difference is likely that reports come in late and are added retroactively. An example is Spain, which is not reporting on weekends.

India continues to lead the world in both daily deaths and cases and now ranks behind only the U.S. with 6.1 million cases for the pandemic total. It ranks 3rd in deaths behind the U.S. and Brazil. It looks likely to top both lists in coming weeks, though its rate in both categories has slowed slightly.

While Latin American countries are still highly represented (6) among those top 33 countries, their daily case an death numbers are, as a group, dropping. Europe is the area seeing significant increases with the largest number of countries represented in the top 33 at 11. It would be 12 if Spain had reported for the day. Five countries are in the middle east. It’s a concern, as the shift corresponds with cooler temperatures in the northern hemisphere, which is much more highly populated than the southern hemisphere. If cooler temperatures are going to produce a surge, this could be the beginning.

33,782 new cases were reported yesterday, along with 276 deaths. Compared to the same day last week, there are about 500 more cases and 16 fewer deaths, showing the relative stability of the numbers. The current seven-day average for new daily cases is 41,461, about 150 more than last week on the same day and within a couple thousand of where it was a month ago.

The average daily death rate is now 759 deaths per day, and also remarkably stable, only six above last week and 23 below where it was two weeks ago. Texas (35), Georgia (32) and Arkansas (23) led the country in reported deaths yesterday. Ten states reported at least 1,000 new cases yesterday, as compared to eleven each of the last two weeks on the same day. Of these, three reported multiple thousands: California (2,513), Wisconsin (2,217) and Tennessee (2,104). Midwestern states have seen some of the largest recent increases. The rest of yesterday’s top ten in order: Florida, Illinois, Texas, North Carolina, Missouri, Minnesota and Utah.

Wisconsin saw its largest single-day case number this weekend. Some interpreted events this weekend as suggesting a second stimulus check could still be sent to Americans and stocks rallied. CDC Director Redfield was overheard on a phone call saying of Dr. Atlas, President Trumps new close advisor on the White House Task Force that “everything he says is false.” The two have increasingly clashed over issues including the wearing of masks.

Numbers of reported tests continues to bounce on a daily basis, with yesterday’s number the third highest ever reported at almost 43,000, bringing the pandemic total tests to over 2.8 million. The state reported a 5.51% positive test rate for the day and Johns Hopkins University is reporting a 5.7% seven-day average.

The Knox County Health Department is reporting 111 new cases today, the highest number it has reported since September 19. Saturday and Sunday, the health department reported 107 and 76 cases respectively. The pandemic total for the county is now 9,777, with an additional 420 probable cases. 8,512 people who were ill are considered inactive.

There are now 41 COVID-positive Knox County residents in the hospital, the most at a single time since September 12. The total hospitalized at any point during the pandemic has now reached 363. For the weekend, there were five new Knox County deaths reported, including two for today and bringing the total to 83 deaths attributed to the disease.

In other local news, an updated version of the letter released on Friday, now includes an additional 90+ signatories. The Knox County Commission meets tonight to consider two proposals. The first would add a member to the board. The second one would essentially express displeasure with the direction of the Board of Health mandates and recommend that they follow the Tennessee Pledge and do not exceed its requirements. The second was toned down in the face of likely legal hurdles.

The University of Tennessee is reporting 95 total active cases, including 89 students and 6 staff. The number remains dramatically lower than just a couple of weeks ago. 1,385 UTK community members are reported to have recovered. Isolations or quarantines have also dramatically dropped and now total 343, 40 staff members and 303 students. No new clusters have been reported.

This week should be a pivotal week in determining what is happening at the University of Tennessee. Medical professionals have stated that they see no way the dramatic drop is possible if all cases are being found. With the systematic surveillance testing underway on campus, we should begin seeing an answer this week: Were there a large number of hidden cases or has the illness suddenly come under control?

The Knox County Schools are reporting 50 active cases, down from 66 on Friday, but up from 32 last Monday. We may be seeing an emerging pattern in which the schools know of fewer cases at the beginning of the week, but learn more as the school week progresses. The number is up dramatically from last Monday, but down from Friday, so whether there is a pattern dictates whether today’s numbers are good or bad news.

Of the fifty cases, 35 are students and 15 are staff. 257 are considered recovered. There are currently 885 students and staff in isolation or quarantine, including 800 students and 85 staff members. Friday the number was 1,091 and a week ago it was 753. Again, there appears to be a pattern of increases through the week. Today’s number is higher than a week ago, but lower than Friday.

Halls High School remains the only school relegated to complete virtual instruction. Both the custodial staff and substitute availability benchmarks are in the red zone to start the week.