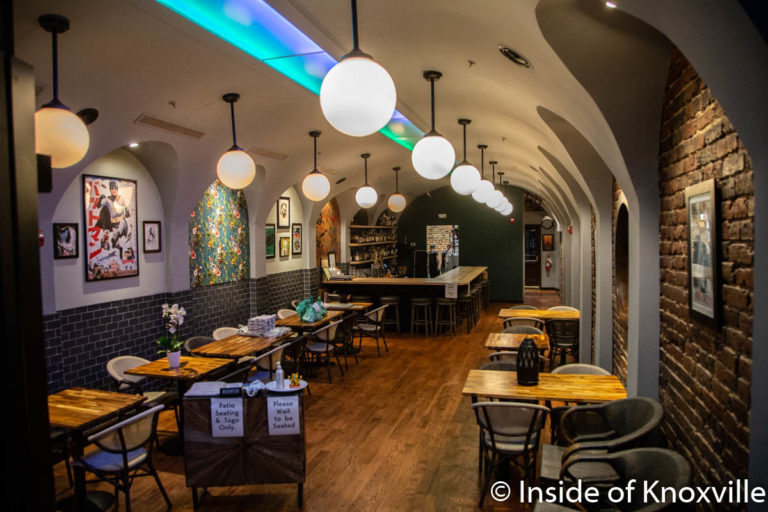 A favorite downtown restaurant has moved to a new location and is open for outdoor dining. As I first reported last March, Kaizen owners Jesse Newmister and Maragaret Stolfi made the decision to move to a larger location and, just as they began making the move, the pandemic hit. It might have appeared to be a case of bad timing. Or was it?

“When everything first happened, it was nerve-wracking. It felt like terrible timing. But, now, we actually have an outdoor space and it turned out perfectly,” Stolfi said as the three of us sat down to discuss the move. The two decided, as she put it, to “double down and move forward.” Early indications are the move has already paid off.

Jesse said business, which has been exclusively take out since last March, has been steady at about 40% of previous sales. Combined with PPE, that has been enough to keep moving forward with work on the new space and to pay their employees. They were able to keep their back-of-house employees working and shared all tip money between the others. In the end, they retained their team.

They opened the new kitchen week before last, but continued to do carry-out only until they got a flow going in the new kitchen, which is several times larger than the other and has all new equipment. Last week they moved to seating outside and in their first full week in the new space, had their second biggest week ever.

Where the previous restaurant could seat 48, but generally had somewhat fewer, the new restaurant currently offers outdoor seating for fifty and that will expand to 120 when distancing is no longer necessary. And that is before indoor seating which will drive the total even higher. At that point, the total will rise to about 170.

Jesse said the restaurant was slammed over this last weekend. The old restaurant had an order line that was about 36 inches long and the new one is strung about seven feet across a window. Before opening, Jesse said he hoped to never see that filled. He saw it full the first week and said more tickets were sitting nearby. They powered through it, but Jesse has realized they must hire additional help and cooks and servers are on the way.

They’d hoped to be open sooner, of course, but the inevitable delays pushed opening day back. The city’s malware issues caused some slowdown and waiting for permits has been a recent them. They opened unable to serve beer or alcohol, got the beer permit mid-week last week and just got approval for liquor and wine, yesterday.

The two had told me they wanted to carry the feel of the old space with them into the new space. They and the staff now love the new location. Margaret confessed she didn’t think it would feel like home for a while, but “this feels natural and right, much faster than I expected.”

For now, Jesse said the menu would remain the same. He didn’t want to introduce a new restaurant, kitchen and menu at the same time. Once the new staff is aboard and the restaurant is running smoothly, new items will be worked into the menu. He said they’ve been brainstorming and have a list of dishes ready to add.

Beyond the doors of the new restaurant, Jesse and Margaret both are very pleased to be working near so many good friends and business owners. That three businesses – Hen Hoc, Honeymouth and Kaizen – have opened within a couple of week period adds to the excitement on the block. They’ve already experienced the synergy as they gain customers from Honeymouth’s grand opening last Friday night, Pretentious gained customers because of the wait at Kaizen and later, Pretentious rolled a keg of beer over when Kaizen ran low.

Notice the dining room as you walk through as they’ve turned it into a very attractive space. Alex Jaynes of Able Trade and Alex Jaynes Woodworks built the bar and liquor shelving. More touches are planned as they find time, including a landscaping makeover for the patio. There was more they wanted to do, but they said they had to narrow their focus to what had to be done to open the doors. Ultimately, they want the outside patio “to look like the roadside stands we ate at in Thailand.”

They are operating the same hours as the previous location, open Tuesday through Saturday, 11:30 am to 3:00 pm and 5 pm to 10 pm. Reservations are strongly encouraged, though walk-ups are accepted as space becomes available. Online orders for carry out are still accepted, though they had to cut those orders off early last weekend as they became overwhelmed.