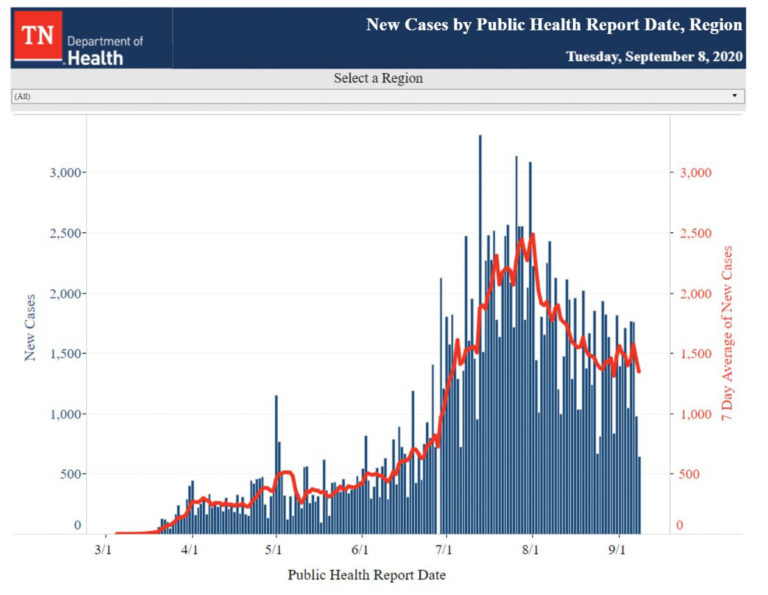 It feels like cheating to say it’s mid-week after we got Monday for free. What the heck? Let’s cheat. Halfway to the weekend. Find a little joy over the next couple of days then treat yourself on the weekend. Presumably, there will be actual big-boy college football on this weekend! We can pretend all is normal for a few hours.

The state of Tennessee reported 645 new cases and 27 additional deaths yesterday. Almost 166,000 Tennesseans have become ill with COVID-19 since the beginning of the pandemic and 1,896 have died of the illness. Hospitalization numbers increased for the second consecutive day, to 862, still well below previous peaks. Numbers of critically ill COVID-19 patients also increased for last two days, but remains far below their peak.

Just over 148,000 cases are now inactive, leaving about 16,000 Tennesseans still considered to have an active case of COVID-19. There are 4,410 probable cases across the state. The state reported a 14.29% positive test rate, yesterday, while Johns Hopkins reports a seven-day positive average of 7.1%.

Presumably because of the holiday weekend, the number of tests and new cases reported by the state of Tennessee (and many other states) dropped dramatically, yesterday. Tennessee reported only 6,201 tests, less than 25% of the number of tests from three days earlier. The result was predictable in that case numbers dropped dramatically and positive test rates jumped. Expect both to return to closer to previous numbers after the holiday shakes out. Two weeks from now we’ll know how well we navigated the Labor Day holiday.

The Knox County Health Department reported an additional 100 cases overnight, bringing the total to 7,756. Active cases dropped by 54 to 1,798. It’s difficult to know the number shuffling behind-the-scenes, as people are reassigned to various categories, but total hospitalizations increased by 1 overnight to 294, while the current hospitalization number increased from 42 to 47. There are 277 probable cases and no additional deaths were reported, leaving that total at 64. 6,171 cases are now inactive.

Benchmarks were updated early this afternoon and, as one might expect, the benchmark for new cases being stable or reducing went from green to red, due to the dramatic recent increases in numbers. The testing metric, which relates to the volume of testing and the turnaround time for results also turned to yellow. Turnaround time has been improving, so there must be concern with the number of tests. We’ll get more explanation tonight at the Board of Health meeting.

Active cases rose overnight at UT from 600 to 622, a more modest increase than they’ve recently experienced. The increases continue to be, overwhelmingly, in the student population, as only 6 of the number of active cases is among staff. 335 are inactive, an increase of 32 from yesterday. The number in self-isolation hardly increased, going up by 2 to 2,014. That number includes 68 employees and about equal numbers of on-campus and off-campus students. 22% of that total has had a positive test, but a slightly larger group has symptoms.

Dr. Plowman is scheduled to address the Board of Health tonight and, given her somber tone in yesterday’s briefing, her comments might be interesting. She promised there would be more interventions coming.

There is some encouraging news from Knox County Schools: After several weeks of school, numbers have dropped. At least initially, the feared waves of spread have not happen. There have been cases and the schools are struggling in particular ways, but not due to massive increases in spread.

The school system reported 45 active cases yesterday afternoon, divided into 31 students and 14 staff. Last week ended with 50 cases. It could be that newly diagnosed cases from the weekend have not been reported. We’ll soon know. 123 have been moved to the recovered category and 829 remain in isolation.

The isolation numbers are a concern, with 751 students and 78 staff unable to attend in-person classes. While the number of staff in isolation has remained steady or fallen, the number of students continues to increase rapidly. Last week ended with 573 in isolation, meaning there was a 31% increase in those three days. While in-person school may be sustainable at that level, the rate of increase has to be curbed or it will quickly make classroom instruction very difficult. A week ago, the number was 497.

An additional concern is reflected in the benchmark ratings. Whereas substitute availability has been, and remains, red, custodial staff, which had been yellow, has now been changed to red. Custodians are a particular concern, given the need to sanitize classrooms and public surfaces so much more often. The other metrics, including student and teacher attendance, bus service and cafeteria attendance, are all green.