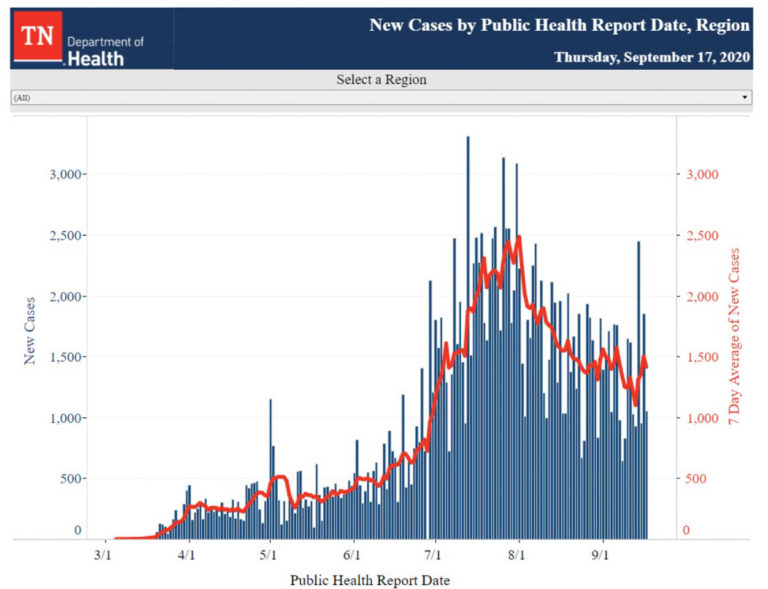 It’s the weekend. I hope you all find time to relax and get away from the news. It appears we will get more football this weekend, so maybe watch some of that, if its your thing, and mute the political ads. Urban Girl is now officially front-seat-legal, so she has requested her first ride be to Pigeon Forge and Gatlinburg, just to look out the window at fun things. It’s a little sad, but that’s what she picked, so that’s what we’ll do!

The state of Tennessee reported 1,053 new cases yesterday, bringing confirmed cases to 172,453. There are an additional 5,687 probable cases.

13 additional deaths were reported, bringing that total to 2,164. 57 COVID-positive Tennessee residents were admitted to hospitals. The net for the day, however, produced a drop in total hospitalizations to 735 hospitalized. Of these, 252 are in ICU and 122 are on ventilators. Each of these totals have dropped pretty steadily for the last six weeks.

The state reported about 27.5 thousand tests, with a positive test result rate of 5.84%. Johns Hopkins has the seven-day positive rate for the state at 5.8%.

The Knox County Health Department is reporting 77 new cases, returning us to the up-and-down pattern we’ve seen before, which must be a test result flow oddity (the last six days numbers are 121-63-219-66-151-77). The new cases bring the total of confirmed cases to 8,884. An additional 356 probable cases are being reported. The oddity with probable cases is that they have grown every day since the beginning of the month and they should, rightfully fluctuate.

The University of Tennessee is reporting 412 active cases today, down from 435 yesterday, and down from 672 a week ago. Of the current 412, 398 are students and 14 are staff. 894 students and staff have recovered from the illness.

Yesterday, I mentioned that active cases had dropped further than could be possible given the increase in recovered cases. I spoke to Owen Driskill at UT who ultimately determined that the discrepancy is related to removing duplicate isolation forms submitted by students, inflating the active case number. When the duplicates are removed, they are not moving them to recovered, thus the numerical anomaly. I asked if they might start including a new case number each day.

Dr. Plowman noted that the spring calendar was released (starting later, ending earlier, removing spring break). She also noted that the new surveillance testing program has begun. She noted that students formerly living in Massey Hall had been very cooperative as they were moved and said she appreciated their spirit as they were inconvenienced.

She reported 15 new cases today, data not included on the website.

Dr. Gregg said the numbers look encouraging, but he fears they appear that way because students are avoiding testing. He said this will ultimately make it worse, as the disease will spread more widely. He seemed relatively certain that is what is happening. If everyone participates in the new testing program as requested, they are expecting an increase in cases.

Contact tracing staff has been increased. Their data indicates the spread among students is coming from social circles and residential settings. He said many students are completing self-isolation forms several days after developing symptoms or getting tested and that is a problem. He also said some are dismissing their symptoms as another illness and spreading the illness until they get tested.

Provost Zomchick said the calendar had been put together after consulting a range of stakeholders. The most important consideration, he said, was fulfilling the mission of the University while keeping students safe. The assumption was that the situation was the same in spring as it is now. The later start moves one week further through flu season. Spring Break was eliminated to avoid mixing between campus and a large number of other communities.

Knox County Schools are reporting 48 active cases, including 39 students and 9 staff. The total number reflects an increase of 1 from yesterday, but is down by 10 from the same day last week. 184 have recovered and 937 are in quarantine or isolation. Of the 937, 867 are students and 60 are staff members. The number in isolation/quarantine has increased by 35 since yesterday and by 66 since a week earlier. The increase has come more from students than staff, though both have increased.

Since yesterday, the custodial metric has gone from yellow to red, while the substitute metric has switched from red to yellow. The other metrics remain green and no further schools have been closed.