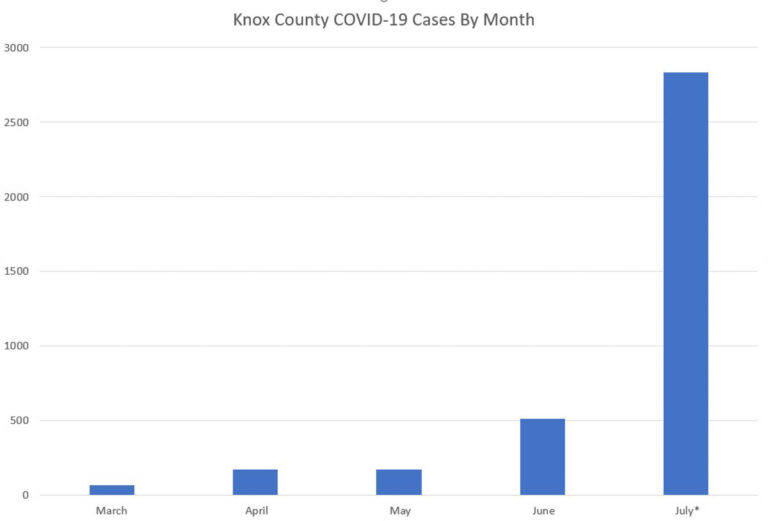 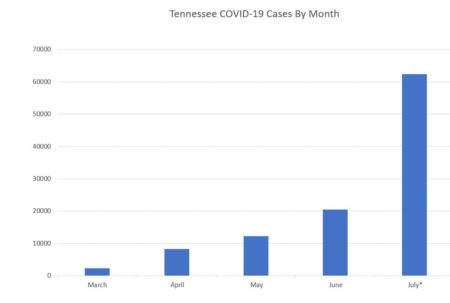 I wanted to take a moment, now that the final numbers are in to share the charts for Tennessee and Knoxville with the data aggregated by month. I’d been asked to share a chart or graph providing the information that way as the days have gotten more numerous, making those charts messier. We also now have enough months that it makes sense to use the longer time periods.

I’ll not say much about the charts. We’ve discussed the numbers in detail in the afternoon posts (and this afternoon’s will be late as I have a mid-day obligation) and these charts are simply a summary of the data presented differently. Viewed monthly, the truth becomes clear just how serious a month we’ve just concluded both state-wide and county-wide. I don’t have the information to put together monthly charts of the other statistics like testing and hospitalizations, but hopefully these help.

Controlling the spread of the virus is contingent on several efforts. On the one side, you have the personal responsibility we can all take to wear masks, maintain social distance, clean surfaces, wash our hands and stay home if ill. On the public health end of the equation, there is testing, reporting and contact-tracing. Contact tracing simply involves talking to a person who has had a positive test result and asking them with whom they’ve had significant (10+ minutes within six feet with no mask) contact and then talking to those people. Pretty simple.

The difficulty comes when the numbers of positive tests proliferate quickly. That problem can be compounded if those people are hard to contact, are uncooperative or have had numerous such contacts. Take an example of a day in which 150 new positive tests are obtained. If each person has ten contacts, that makes 1500 people who need to be contacted quickly. The longer the time lag, the worse the result.

With that in mind, I’ll relay a story shared with me last night from a reader. I’ve edited lightly for clarity and I’ve edited some of the details in order to preserve the anonymity of those involved:

I learned yesterday that one of my son’s housemates has COVID-19 with minor symptoms. They both work at a restaurant outside of downtown. My son was not contact-traced by the health department, however his employer requires anyone living in a household with a person who tests positive case to get tested and not return to work until they have a negative test result. My son is scheduled to get a rapid test at a local clinic on Wednesday—the soonest they can test him . . .

They still live in the same house, although my son has the upstairs and the friend and his girlfriend have the downstairs. They share a laundry and kitchen but don’t usually cook together. They don’t share a bathroom.

The two work as waiters. To be quarantined for a 14-day wait-and-see period would mean he’d be out half a month’s pay. And for him to live elsewhere would mean coming home to stay with me (I’m 66 and have asthma) and his 77-year-old immune-compromised step-father. I’m not urging that, but there’s no good solution . . .

Her son is faced with bad choices. Even if he tests negative and returns to work, he only gets one day of work this week. Admittedly, it would be tempting to lie to his boss and say he’d already gotten a negative test in order to go back to work.

He . . . is not going to work knowing he might be infected. I can help him though. Not all workers have family help, so who knows how many are on the job right now knowing they have been exposed and waiting for test results? Or just ignoring the risk and not even getting tested?

There are a number of concerns in the story. It’s an example of how our numbers can be lower than is accurate as people might choose to avoid a test that will sideline them from work for at least ten days. And that is if the young man follows the dictate of his boss – which is incorrect procedure according to the health department.

Dr. Buchanan repeatedly says if you have contact with a positive case, you need to quarantine for fourteen days. She often adds: You cannot test your way out of quarantine. A test taken too early would be negative. It’s fourteen days with no test required. How many will avoid that because they can’t financially afford to do otherwise or they simply don’t want to quarantine? How many bosses misunderstand this? Dr. Buchanan says a number of area doctors misunderstand the guidance regarding quarantines.

And then there is the issue that her son was never contacted by contact-tracers. They live together and work together. That seems like a pretty close contact. And what of the other workers at the restaurant? Were they contacted and the roommate overlooked? That doesn’t seem likely. It’s a concern.

The reader suggests that the “lack of access to free, rapid-results tests leads to Covid spread, especially among low-wage workers.”

I have no way of knowing if this is common and I’m accepting this person’s word for what has happened in this particular situation. I believe her. If nothing else, the story illustrates the lack of understanding of what is expected when we are exposed, the excruciating financial decisions some people are being forced to make and the easy way in which contact tracing can simply break down. Each of these realities presents an obstacle to our way out of the current situation.