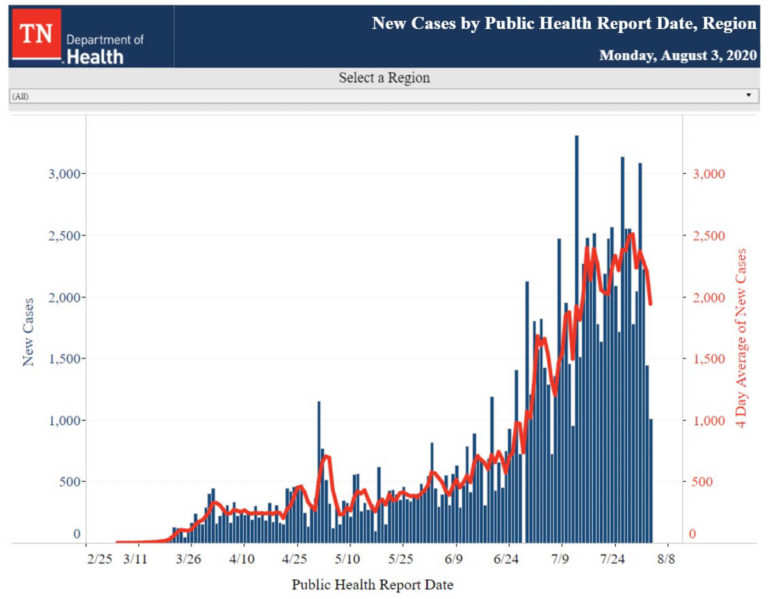 There is some strangeness in today’s numbers, so I’m going a little lighter on searching for links and take time for a closer look at some of the data. On the surface there would appear to be news that is almost too good to be true. I’m no statistician or epidemiologist, but I am a person paying pretty close attention. I’ll welcome anyone who can help me understand to look at the current data in a different way.

Since the beginning of the pandemic, 18,515,908 people have been diagnosed with and reported to have COVID-19 and 699,093 of those people have died. Yesterday an additional 199,893 cases were reported, along with 4,368 deaths. A bit over 11.6 million people have recovered and about 6.1 million people are currently ill.

Compared to the same day last week, there are about 18,700 fewer cases reported in the world. The seven-day moving average dropped by almost 2,700 in a single day to its current level of 256,765. This continues the trend of declining global cases started about July 30 after the increase had begun to slow. What’s happening? The world numbers are being curved almost exclusively by the United States. We’ll look at that more in depth below.

The 4,368 deaths yesterday compares to 4,232 on the same day a week earlier. The seven-day moving average of deaths continues to very slowly increase and now sits at 5,731, roughly where it was on April 30. After dropping dramatically, the number of daily deaths are now closer to the peak in mid-April than to the trough in late May. Countries reporting the most deaths yesterday include India (810), Brazil (572) and the U.S. (567).

The big change is in the U.S. numbers which dropped by 7,500, or about as much as the total of the other three. Brazil and the U.S. together dropped the number by 14,000. So have things suddenly gotten better in each of the countries after being on a dramatic upward trajectory? I don’t have the time to get into Brazil, but we’ll look at the U.S. next and try to see what is happening.

As of this writing, there have been 4,887,648 Americans diagnosed with COVID-19 and 159,596 have died. Yesterday, there were 48,646 new cases and 546 deaths in the country. About 2.45 million have recovered and about 2.3 million people remain ill. For the second consecutive day, the number is lower than it has been since July 5 (I misread the chart and said July 7 in the previous article).

The seven-day moving average has made a pretty sharp u-turn as naturally occurring phenomenon go. The seven-day moving average now sits at 60,987, down about 1,800 from yesterday and about 8,200 from ten days earlier. The curve is moving downward almost as fast as it moved upward in the period just prior to the peak. While the number continues to be higher by an order of magnitude than most countries ever saw, it is striking to see it suddenly and quickly drop.

The 567 deaths were slightly fewer than the week before (597) and the trend there hasn’t changed as dramatically, though the curve has leveled off in the last three days. The current average number of deaths per day is 1125 over the last seven days, having dropped by 4 per day across the country. The current total is comparable to May 25.

With smaller total numbers, there must necessarily be smaller state numbers. Thirteen states reported at least 1,000 new cases, which is down slightly from the sixteen a week ago. Much of the difference is at the top, where four states, rather than six as a week ago, reported multiple thousands. Even among that group, none were near the 9,000+ level seen last week, nor certainly at the 10K+ level we’ve seen multiple times in recent weeks.

So, what has produced the sharp drop in cases? There are a limited number of possibilities.

This would not be unprecedented for a virus. They do mutate, and often to less virulent forms. Given the continued spread and increase in numbers elsewhere, that does not seem likely and I’ve seen no articles or study that suggest it.

This also happens, for example, each year when the weather becomes warmer, the seasonal flu fades to much lower numbers. There was early hope this would be the case with COVID-19, but the month of July made it clear that this would not be the case.

This one could have some credence. In recent weeks, more states, even ones that resisted initially, have instituted universal masking rules. Alabama and Arizona came on board a few weeks ago and a number of counties and cities in Texas have done the same. California has tightened its restrictions considerably in places with large out breaks, as well. So, has there been enough cooperation with the restrictions to make a difference? Maybe. I’d like to hope it has helped. I’m sure we’ll see studies or data analyses on those variables soon.

This brings us to the way we count cases. We count them by testing and adding up the positive results to get our number. If the amount of testing remains constant, but the virus is spreading less, we see a drop in positive test results and, so, the total number of new cases. For example, if we are testing 100,000 people every day and our positive result rate drops from 8% to 5%, this would dictate that the number of positive daily tests was 8,000 a day and it dropped to 5,000 a day.

Alternately, if the rate of testing drops to 10,000 a day and our positive test result remains the same, our total cases would drop to 800 a day. Even if the virus spread at twice the rate, we would still have 1,600, rather than our original 8,000, simply because we tested less. 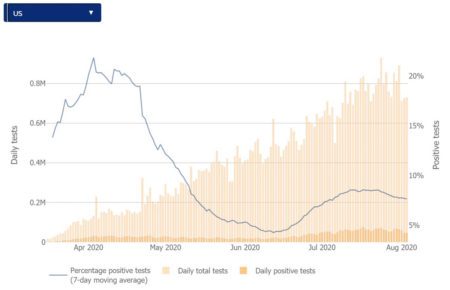 Take a look at this chart for the U.S. It is from Johns Hopkins University, the same site I use every day to show Tennessee’s testing and positive test result rate. We don’t have a seven-day average for total tests for this chart or the others. To my eyes, it looks like we’ve had a bit of a decline in tests over the last ten days, but I can’t be sure. The positive test result rate also shows a decline, though it is still above target levels at 7.7%.

But let’s take a look at the states driving the recent high case numbers. I’ll put their charts in order cases and testing side-by side. Take a look. 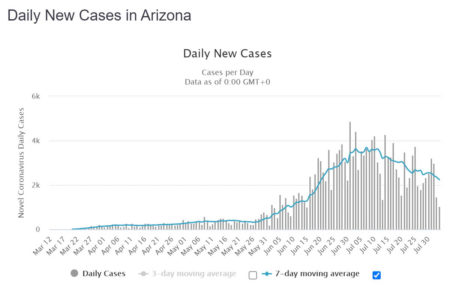 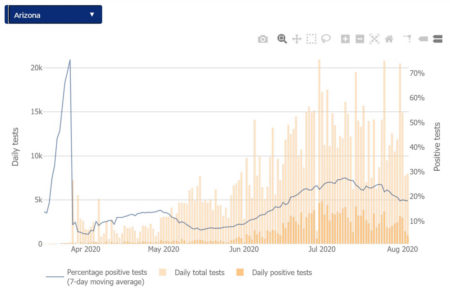 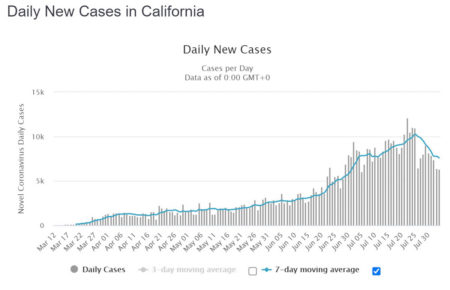 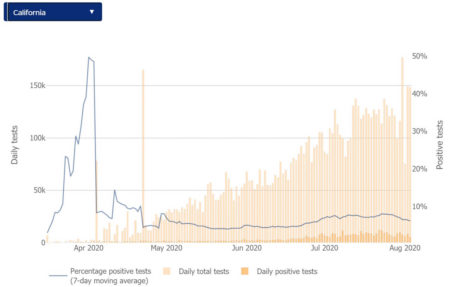 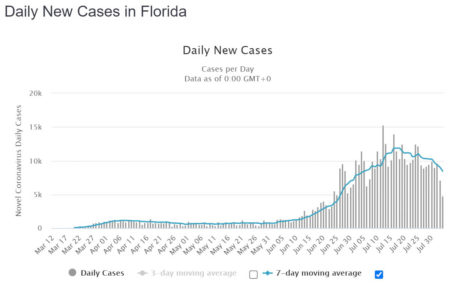 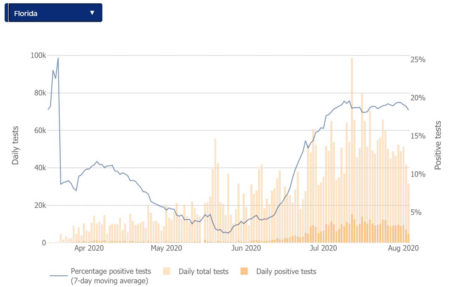 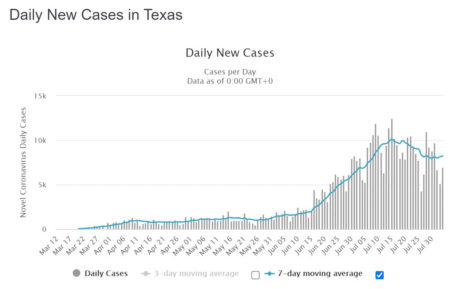 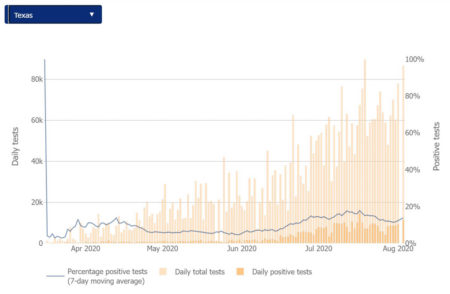 While, again, it’s hard to say from a glance, it appears to me that testing has declined in Arizona, certainly Florida, and probably Texas. California appears to be about the same. Positive test results have declined to about 20%(!) in Arizona, to about 6.1% in California, have more or less stabilized at over 18% in Florida and it fell before rising again to 13.8%.

So, if I’m looking at the charts correctly, in Arizona and Florida, any drop would seem to be mostly due to a decline in testing. In Texas it might be some of both, and in California it appears more likely due to the drop in positive test result rates.

How much of a difference has it made? Consider that these states have had enough cases to rank in the top five to ten countries in the world. So, it has made a lot of difference. The dates of peaks don’t line up perfectly, but over the last four weeks for Arizona and 1 to 3 weeks in the other states, these states have seen a total drop in seven-day rolling averages of 9,425. It’s enough to explain the entire drop in U.S. cases and more than enough to explain the drop in world cases.

Since I’m late getting this article out, the chart above is from yesterday and these numbers were published today.

The state of Tennessee is reporting 1,805 additional cases and 25 deaths today, bringing these totals to 112,441 and 1,117 respectively. With 2,381 recoveries, the active case number drops for the day and now sits at 38,065. An additional 92 were hospitalized, and that total has risen to 1,093, which is in a tight range for where it has remained for two weeks. There are 340 pending cases in the hospitals. About 18,000 were tested, bringing that number to almost 1.6 million.

Given the above discussion, take a look at Tennessee’s daily number of new cases reported above and then at the chart below showing testing and positive results. The case numbers have leveled off or dropped, but it appears testing has done the same, with relative low testing numbers over the course of several days and data missing another day. The positive test result rate remains about the same, at 8.7%

Translate all of that locally and I’m wondering if our testing has dropped or if lab returns are so slow that it is impacting our case count which has, likewise dropped precipitously. As noted above, perhaps it is the local mask mandate? Have enough of us followed guidance to move the needle that much?

In any case, numbers have been dropping for about the last week. Today, the health department reported 54 new cases, the lowest in three weeks, bringing our total to 4,165. 2,047 people have recovered and 2,175 cases remain active. 35 Knox County residents are currently hospitalized with COVID-19, up four from yesterday.

Due to the length of this post and the pending benchmark information and board meeting tomorrow, I will not publish an article tomorrow morning.