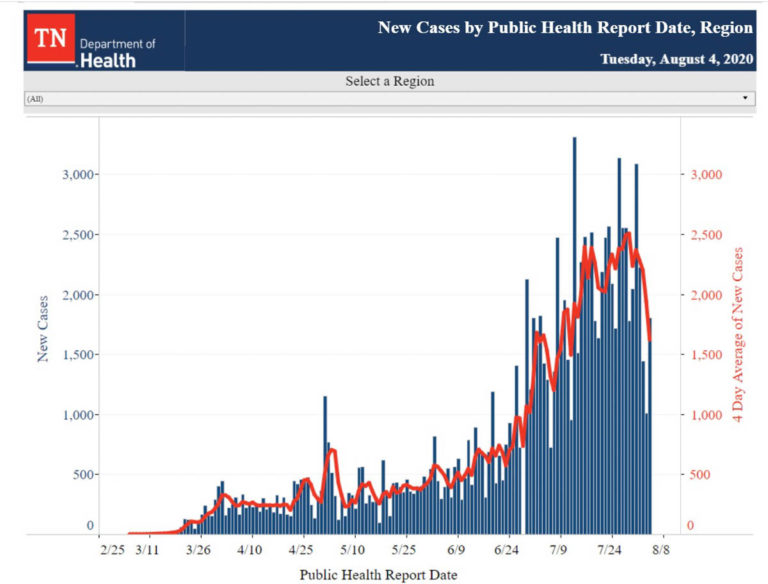 Did you get outside last night? It felt just a touch like autumn and I don’t think I’m hallucinating. Just from personal impression, it seems we’ve had more delightful nights this summer than usual. I’m usually looking for a cooler spot this time of year, just to feel cooler air on my skin. Whether it’s the top of the Smokies, the depths of a cave (we did that last summer) or a quick trip to a cooler city, it just helps wade through the Knoxville summer. This year, it seems it has come to us. Small pleasures to relish!

18,765,357 people have been diagnosed with COVID-19 and 705,583 people have died since the beginning of the pandemic. Of those, about 12 million people have recovered and 6.1 million remain ill. Yesterday an additional 256,144 cases were reported, as well as 6,292 deaths attributed to the illness.

The 6,292 deaths represents an increase of about 400 over the same day last week. The result is an increase in the seven-day average number of deaths to 5,818 deaths per day. A week ago the average was 5,686, so the number of deaths continues to slowly rise and is comparable to the rates at the end of April. The countries driving a large portion of the deaths included Brazil (1,394), the U.S. (1,362) and India (842).

At the same time the countries at the top far outpaced any others, there were 27 countries around the world reporting at least 1,000 new cases. Eight of the twenty-seven are in Latin America, forming the largest geographic concentration among the countries. The Philippines is notable for one of the highest rates of increases, which is a concern as it has been only lightly hit to this point and it has a large population of 110 million.

The U.S. isn’t the only country with disagreements over masking resulting in patchwork rules. The Netherlands has refused mask mandates, but Amsterdam is now imposing them, for example. France continues to add financial support to its wine industry, which is reeling primarily to tariffs imposed by the U.S., followed by a massive drop in U.S. demand due to the closure of bars and restaurants. Though the daily increase (121) seems small by American standards, it represented the highest single-day total in Greece since April and has caused officials there to be concerned with Greek “complacency.”

Relative to the same day a week earlier, cases have dropped by about 10.5 thousand, causing the seven-day average to continue to plummet. The current seven-day average for cases is 59,477, the lowest it has been since July 11. While still nearly twice as high as our original peak, if truly reflective of new cases, the trend is the best news the U.S. has had in months.

The number of deaths is slightly larger than the same day a week earlier (+32). The seven-day average continues its increase of the last month, but is showing some flattening over the last three days. The current average daily deaths is 1,130, up from the low 500s a month ago, but still much lower than the peak of over 2,200 in mid-April.

New York City has instituted quarantine checkpoints for those entering the city. Not all domestic economic news is bad as the U.S. as the services sector has shown surprising strength in July. The New York Times reports that testing is up, but results are continuing to be backlogged, prompting six states to band together to work on the problem.

As yesterday’s report was so late, I included the afternoon state data, so that remains the same, though I’ve updated to the graph above. The recap: The state of Tennessee is reporting 1,805 additional cases and 25 deaths today, bringing these totals to 112,441 and 1,117 respectively. With 2,381 recoveries, the active case number drops for the day and now sits at 38,065. An additional 92 were hospitalized, and that total has risen to 1,093, which is in a tight range for where it has remained for two weeks. There are 340 pending cases in the hospitals. About 18,000 were tested, bringing that number to almost 1.6 million.

Testing continues to appear to drop in the state, though it has been at very high levels. The positive test rate continues to remain outside the target range and stubbornly around the same level, currently measuring 8.8%.

Locally, the Knox County Health Department reported 131 new cases today after a significant dip yesterday. Today’s number is more in line with what we’ve seen over the last couple of weeks. The new cases bring the pandemic total to 4,296 for the county. 2197 are reported to have recovered and active cases sit at 2,203, up 236 from a week ago.

Thirty-five Knox County residents are hospitalized, slightly lower than a week ago and the same as yesterday. No additional deaths were reported, so that number remains at 40. There are 144 probable cases.

I asked the Knox County Health Department to respond to several questions, some related to yesterday’s article regarding the drop in new case numbers. Here’s what they had to say:

We can’t speak for what the state as a whole is seeing. Regarding Knox County, we will be able to speak more in depth about the metrics regarding testing volume and turnaround time for this week tomorrow during our benchmark presentation. That said, over the past few weeks, the volume of testing we have seen in Knox County has continued to trend consistently. Likewise, the turnaround time for results we have seen over the past few weeks also has trended consistently.

While these recent days of lower new cases could lead to feelings of cautious optimism, we know there is the opportunity to be other factors at play. We are not aware of any issues, but we have asked the State to see if there is anything they are noticing that could be impacting the reporting of positive labs. If no issues are identified, the lower volume of new cases that we have recently seen is encouraging.

There could be several reasons for this and since we don’t know the full story and context we can only speak in general terms. First, the health department is not always immediately notified of a positive case. Sometimes positive cases are first reported to a provider or a lab. Those groups then have to notify public health. Once public health is able to make contact with a confirmed case (We aim to reach out within 24 hours of notification, but that doesn’t always mean public health is able to get ahold of the individual on the first attempt), they ask the case a series of questions regarding who they have been around and where they have been. The information received is only as good as the information that is provided. If a case doesn’t provide contact tracers with the names of their close contacts, then we are not able to reach out to them. KCHD attempts to reach out to close contacts within 48 hours of notification, but these individuals do not always answer on first attempt.

You are correct. We are recommending that anyone who is tested for COVID-19 quarantine until their test results come back (This is also stated in a regulation passed by the Board of Health on July 15). This is to prevent further spread of the virus. If someone gets tested and then reports to work prior to getting their test result, they could potentially be spreading the virus before they learn they are positive. As we have said before, we encourage businesses to take a look at their policies to ensure that they are adhering to the five core actions and that employees stay home awaiting test results and/or if sick. Ultimately, this will help the business long-term as there will be less opportunity for spread within the company. A healthy workforce is a productive workforce.

Charity Menefee chaired today’s conference. She started with an example of how to safely gather. She said make it a smaller group and outside is preferable, with chairs spaced six feet apart. If it is a child’s birthday party, she suggested fun masks and encouraged everyone to wear masks. She mentioned tonight’s Board of Health Meeting. She mentioned the testing currently at the Jacob’s Building at Chilhowee Park, from 9 – 3 M,W,F. She noted that next Monday testing will not happen.

She confirmed the above numbers and shifted to benchmarks. Regarding the case benchmark, she said this indicator remains red. She said there was one three-day period of significant increases, but the number of cases looks somewhat better. She said the lower case counts could reflect other issues, but they don’t know of any. They have inquired with the state.

Regarding testing, the light changes from yellow to green. She said testing is going up and return times are remaining consistent. She said the health department is now getting results within 48 hours. The Public Health benchmark remains green as they feel comfortable with their tracing effort. The benchmark for deaths remains red as half of our deaths have been in the last 14 days.

The hospital benchmark remains yellow. Available beds, ICU beds and Ventilators remain close to what they were, though slightly less. Dr. Gray, Chief Medical Officer at UT Hospital then addressed hospital systems. Across the state, he noted there has been a dramatic increase over the last month, but it has flattened in the most recent days. The death rate is now 1% of cases in the state. Curves are flattening across the state in hospitalizations.

He notes there are about 300 new cases in our eleven county region per day, but there seems to be some flattening. Hospitalizations have decreased in the area and a slowing is evident. The hospitalization rate is about 44 per 1000 cases, which is an improvement from 50 per 1000. He reiterated that the hospitals are safe and they are not overrun. Visitations remain restricted to one person per patient.

He pleaded for blood donations to Medic, including particularly from people who have recovered from COVID-19, as the platelets are used in treatment. He also repeated to please limit gatherings and continue the behaviors. He expressed concern about Labor Day gatherings, as well as school starting.