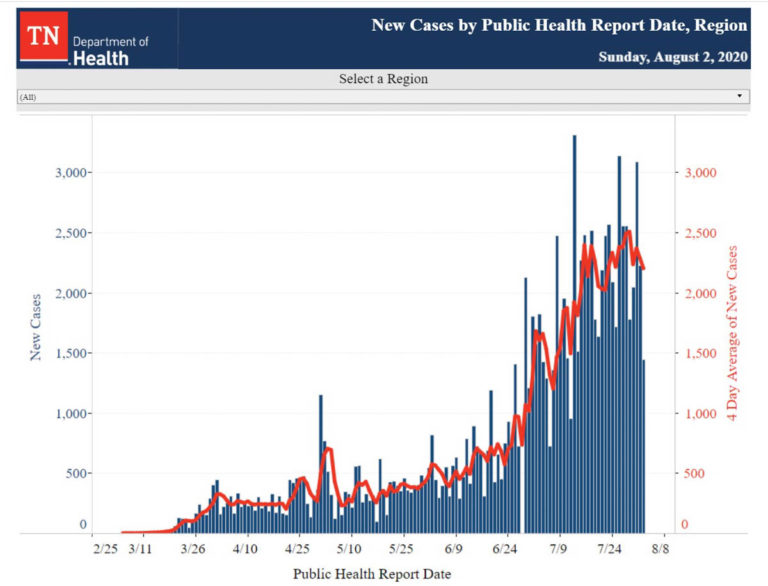 Welcome to the first full week of August. I never want to wish my life away, so we’re looking for joy as we go. We had a couple of great cookouts this weekend (with only our household) and enjoyed great vegetables from the Market Square Farmers’ Market and great meat from Hen Hoc Butcher Shop. While I don’t want to wish my life away, I do find myself pleased that another month has passed and we are (hopefully) closer to getting back to living our lives fully. Urban Boy (age five) said of a vaccine, “I will take the shot and then fly to New York.” Me, too, Urban Boy, me too.

Since the beginning of the pandemic there have been 18,302,593 documented cases of COVID-19 across the world and 694,029 deaths attributed to the illness. Yesterday there were 218,149 cases reported and 4,421 deaths. Just over 11.5 million people have recovered and there are currently about 6.1 million active cases.

Compared to the same day last week, there were slightly fewer cases and the seven-day moving average is now 258,881, about 1,900 fewer new cases per day than the number at which we ended last week. It’s an encouraging sign that the global curve has once again bent, and hopefully headed downward.

Compared to the same day last week, there were slightly more deaths yesterday attributed to the illness. The average daily deaths across the world remains at 5,671, slightly less than where the number stood a week ago (5,701). Countries leading the world in reported deaths yesterday were Mexico (784), India (758), Brazil (514) and the U.S. (467).

The number of countries reporting at least 1,000 new cases yesterday, declined to twenty, the lowest it has been recently. The large number of cases among the top few countries continues to drive the global number: India (52,783), the U.S. (49,038), Brazil (24,801) and Colombia (11,470). Spain, which has seen recent sharp increase, didn’t report, yesterday. The U.K. and Japan are seeing increasing cases and are edging closer to the 1,000 threshold.

In an emotional announcement, the Secretary of Health for Portugal announced the first twenty-four hour period in Portugal without a death from COVID-19 since March. Mexico has made a national decision to start school this month via televised lessons, with no in-person instruction. The WHO says they believe COVID-19 has about a .6% fatality rate, about six times deadlier than the flu.

As shown in the graphic above, new daily cases continue to decline, though they remain at almost twice the rate they were earlier in the year when businesses were closed across the country. The current daily average for new cases is 62,767, down from a high of just over 69,000 about nine days earlier.

The number of deaths continue to rise, though slowly. Yesterday’s 467 deaths is the lowest since the previous Sunday, when they were 462. The current average number of daily deaths from the illness in the U.S. is 1,130, an increase of 73 per day over the last week. States reporting the most deaths yesterday include Texas (75), Florida (62), Louisiana (57) and California (38).

Over the weekend, Dr. Birx said said the U.S. epidemic is in a dangerous new phase of wider-spread cases, including rural areas, after which President Trump saying she, “took the bait and hit us,” and calling her warning “pathetic.” Another study details the plunge in emergency room visits during the outbreak, a fact that has concerned some professionals that people may not be seeking care that they need. With job losses in recent months, about 2,000,000 Americans have lost their health insurance since June according to a new analysis of census data.

Thirty-two additional people were hospitalized yesterday. 1,057 Tennesseans are currently hospitalized with the virus, up from 1,016 two weeks ago. The number has remained fairly stable during that time. An additional 266 cases are pending. In trends, cases continue to remain in the low-to-mid 2,000 range and deaths continue as they have for about three weeks, to average in the mid-teens.

The state reported over 80,000 tests for the weekend, continuing to test on a massive scale, with tests now totaling over 1.56 million. The positive test result rate continues to remain over 8%, currently sitting at 8.7% according to data supplied by Johns Hopkins University.

Locally, the Knox County Health Department reported 114 new cases today. Sunday’s number dipped under 100 for the first time in over a week, at 83. The county data includes a trendline, but not a moving average, so it’s hard to determine improvement, but there appears to be a slow reduction in cases over the last week to week-and-a-half. There are 131 probable cases.

The number of Knox County residents hospitalized has remained fairly steady over the last week and sits at 31, a bit lower than last week in which the number was in the upper 30s for the most part. Deaths continue to rise, with six reported since Friday, bringing the total to 39 in Knox County. Of those, three deaths have been reported among the 18 – 44 age group, eleven deaths of people between 45 – 64, six deaths between the ages of 65 – 74 and 19 deaths among people over 75.

Charity Menefee chaired today’s meeting and began by thanking those who are following the guidance suggested. She noted seeing families and friends meeting in parks, distanced and enjoying social interaction safely. She said they encourage more of that. Testing continues 8 – 3 Monday, Wednesday and Friday at Chilhowee Park. She pleaded for people to continue doing the work.